152. A Weekend in Multicultural Toronto 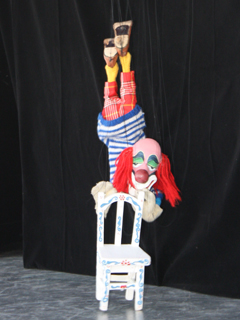 This past weekend I saw five different free or nearly-free ethnic events – not all of them good. I’m limited to afternoons only. If I didn’t fall asleep so early, I could go out in the evenings. I could have seen more.

The first was Corazon de Mexico at Harbourfront Centre. I saw the delightful Marionetas de la Esquina, a Mexican gift to Toronto. I could not help laughing with the children as they watched a ballerina walk a tight-rope. A clown was doing “difficult” acrobatics on a chair. I got to the cooking demonstration in time to line up for a $2 sample of tinga de pollo and a glass of fresh lime juice. Just what I needed on a hot day! The spectators were people who spoke Spanish and people who didn’t look like they spoke Spanish. It was a lovely, multicultural crowd. 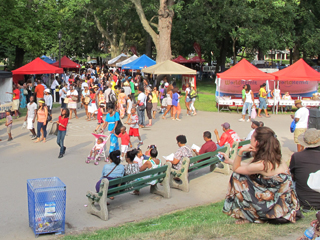 I lost 30 minutes waiting for a street-car. My next stop was Afrofest. It was crowded, but Queen’s Park is big and people were spread out. The Star the next day reported 50,000 attenders. It was wonderful seeing so many Africans and people of African descent. I talked with Jamaicans who included themselves as 300-year old Africans. I met my first Congolese. A small percentage of people who looked non-Africans were there too. Some were even on stage performing African music with as much energy as the Africans. It was great seeing multi-racial groups making music and dancing together. 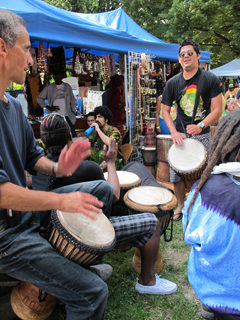 I wandered around absorbing the atmosphere. I’ve been to Africa and we never saw this number of people in any one spot there. I saw friends greeting each other with hugs, chatting, and having a happy, social time. I wished I could identify the costumes. A woman from Jamaica explained about the hats worn by some of the men passing out leaflets. She said they were Moslems. 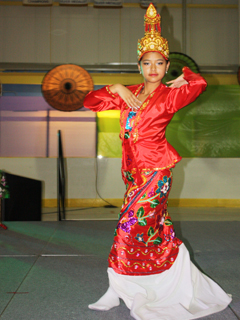 On Sunday, I aimed for Carabram’s “United Africa” and Bangladesh in Brampton. If I had time, I would go to Myanmar, I figured. Each of Carabram’s 11 or so countries had its own venue, or so I thought. I chose these three because “United Africa” sounded like a good title for Toronto’s Africans. In terms of cultures, Africans are not really divided by countries. They are divided by tribes.

As for Bangladesh and Myanmar, I wanted to take some pictures.

It took me an hour to drive from west Toronto to the African venue. I should have printed out the map of the venues from Carabram’s website. My GPS said 1305 Williams Pkwy didn’t exist, but I eventually found it. I arrived five minutes before the show started, apparently 30 minutes earlier than scheduled. For some strange reason, there was only one performer, a dancer. His first dance was interesting, but then he went on and did two more solos. It started to be boring. Fortunately, he pulled people out of the mainly non-African audience and taught them some steps. That was fun. The dancer spoke mostly about himself and village life in Africa. 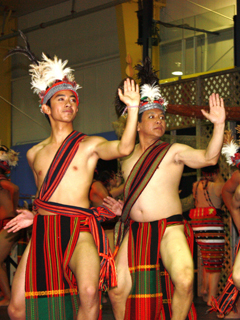 It took another half hour to find the Myanmar venue. I decided to go there because it was easier to find than Bangladesh’s. It had more vendors and much more food than the African pavillion. A screen showed a travelogue about Myanmar. On display were a life-size wooden crocodile and other carvings , lacquerware, and antiques. On stage was a metal “Ka” or kettle drum, a favourite of collectors. An excellent Master of Ceremonies gave some history about each of the ethnic groups performing that day. They had different costumes and dances. If only United Africa had been like that.

The Philippine pavillion was in the same building. After watching the Myanmar dances, I realized there wasn’t much time to go looking for Bangladesh. I went to the Philippines pavillion and it was excellent, the best of the three. As I sat waiting between acts, a Jamaican man beside me said the Philippines and Hawaii were his favourites. He went every year. Next year at Carabram, I’ll look for Hawaii first and then Bangladesh. I hope next year United Africa will be more united. It will be my third priority.

What multicultural adventures have you had lately?  Please tell us about them.