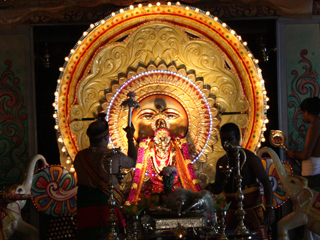 Last year, the Toronto Star reported on a Ganesh festival with a chariot at a Tamil Hindu temple in Scarborough. It looked like something out of south India or Sri Lanka. Alas, it was too late for anyone to go. It happened the day before the newspaper published the report.

This year, I discovered on July 12 that the Sri Varasiththi Vinaayagar Annual Festival started on July 10, a different date. The good news is that it goes on for 14 days. The impressive Chariot procession will take place Saturday, July 23 at 9 or 9:30am. 25,000 people are expected to attend. 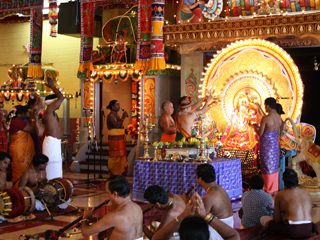 I telephoned the temple for more information. The person who answered didn’t understand me and hung up. I decided to go and look myself. It was 9:30am or so. The temple’s web-site announced that the rituals that morning finished at 1pm, but there would be another session from 4:30 to 9:45pm. There was time for me to go.

I drove more than an hour to an industrial park in Scarborough and found myself in south Asia. The huge room was full of pictures and statues of Hindu gods, their altars draped with garlands of flowers and lights. The ceiling was covered with circular mandalas. Tiny electric lights outlined the many arches. 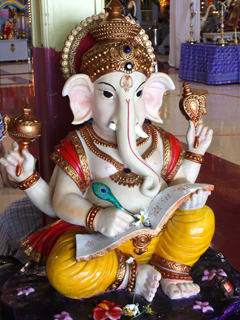 Only 20 people were there at first. No more than 40 appeared during the morning but wow! It blew my mind. Priests dressed in silk sarongs were performing rituals with milk, food, incense, and flaming candles. Brahmin cords hung across their bare chests. Bars of white were painted on their foreheads and torsos.

An amazing drummer was beating out a rhythm. He was later joined by two other drummers, three horn players, and a chanting priest. As they reached the most sacred point of the ceremony, worshippers raised their hands, palms together. Their song got faster and faster, louder and louder. It was all very moving, reverent, and beautiful.

Women in sarees sat on the floor, trying to keep their children under control. A priest tried unsuccessfully to tie a turban onto the head of a reluctant teenager. People came and went. 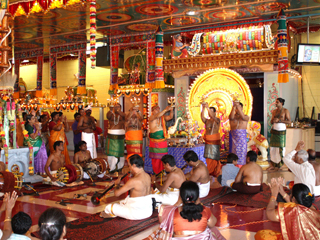 I had asked permission to take photos when I entered. No problem. The main priest asked if I were a reporter. He seemed pleased that I was taking pictures. I tried to maintain a reverent spirit as I did so. This is not a tourist attraction. It is a genuine religious worship service. If you go, please dress as you would in a church service. No shorts and tank tops. Leave your shoes at the door.

The festival continues daily until July 24. Saturday, July 23 is a special day. Worship starts daily at 7am, but the Chariot makes its rounds outside the industrial unit after 9am. Devotees try to pull the Chariot on which rides Ganesh, the elephant god. A few devotees might have skewers in their backs and through their cheeks. You can see these now on the Toronto Star’s excellent pictures on: http://thestar.blogs.com/photoblog/2010/07/vinaayer-chariot-festival.html.

The temple’s web-site: www.vinaayagar.com. Yes, there is information in English on it. It would be great to get your impression of the event. Please don’t miss it.

Everyone, not just Tamils, is invited. Priests and worshippers were friendly. If they spoke English, they answered questions readily.