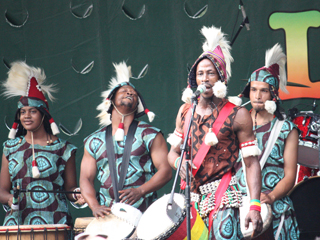 How can you show Multicultural Toronto to out-of-town guests? Two people have asked me that questions. Both of them are looking for interesting things to do the week of July 25-31.

The answer for that week is easy. For other weeks, it’s not always easy. Caribana is in town and many of its events are free. There’s the African TD IRIE Music Festival at Yonge-Dundas Square, Queen’s Park and Nathan Phillips Square. Harbourfront has its Island Soul Festival and you could spend two days there.

There’s also the Festival Kompa-Zouk. This is a celebration of Creole artists. Among its free events, there’s an art exhibition, a festival, and a discussion on Creole, a fusion of Caribbean and European culture. 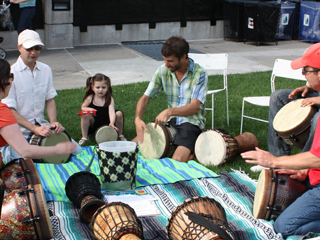 These are especially wonderful events because the performers are very good. They are also worth including because your guests can see multicultural Toronto in the faces of the audiences. They are racially mixed – well almost all. What do Torontonians look like? It depends on where you look. A visiting niece from Chicago once observed, “Torontonians all look Chinese.”

For free Caribana events, the big parade is on Saturday and the “Lime” is on Sunday. The Lime is a place where people can chill out so to speak, after the two weeks, nay a year, of hard work getting ready to compete and party. 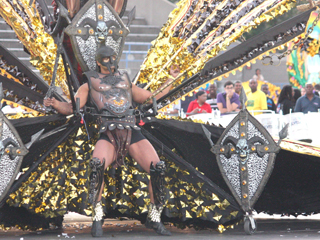 I would also suggest that your friends look at the Caribana web-site. This is for additions to the free events listed on my Toronto Multicultural Calendar.  Your friends might not want to stand for hours watching the parade. Someone should tell them about the grandstand at the starting point in the CNE grounds. For $15, there’s a place to sit next to the judges’ stand. That’s where the contestants show off their best. The waiting time between competitors is minimal there. Usually the parade on Lake Shore Boulevard stretches out with numerous delays. If the weather isn’t co-operating, the easy-going Caribbean time can be hard on your friends. 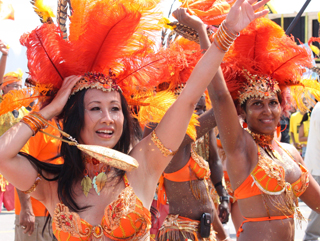 If you or your visitors can afford it, there’s also the highly recommended King and Queen Competition on July 28, and Pan Alive on July 29 if they like steelpan music. They are in the Allan Lamport Stadium at King east of Dufferin. They attract a lot of fans and if you want nearby parking, try to arrive at least 45 minutes early. These two events cost money but are worth it.

This week there are also smaller events. If they are close to your home, you might want to take your friends to them. A celebration of the Cuban Revolution is downtown. A Russian choir is singing in the Sheppard-Bathurst area. A Citizenship Ceremony will be open to the public at North York Civic Centre. Your friends can join you in seeing the wide variety of countries our new citizens come from. You can help welcome them as fellow Canadians. 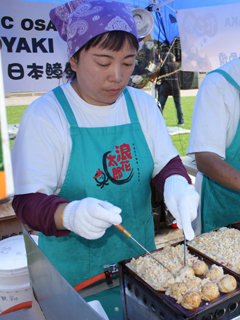 Cultura at the North York Civic Centre will have a Trinidadian calypso/reggae performer and international food vendors.

It’s important that you check out performance schedules at each place so you don’t waste time. You might not be interested in everything. Websites, times, venues, and other details are on: www.torontomulticulturalcalendar.com .

You can take your friends to our ethnic neighbourhoods: Little India on Gerrard at Coxwell is run down, but there are still some shops and restaurants to visit and enjoy. There’s also the library with books in several Indian languages.  Most of our Indians now live in the suburbs. You can find groups of stores and restaurants at Albion and Islington, and west of Pearson International on Airport Road.

Little Iran is at 6080 Yonge Street with cafes, bake shop, DVD store and grocery store. The old Korean neighbourhood is on Bloor between Bathurst and Christie on the Bloor-Danforth subway line. It is almost wall to wall  Korean. Street signs are decorated with an outline of Korea, and you’ll find restaurants, shops making walnut pastry, and stores that sell Korean books and movies. 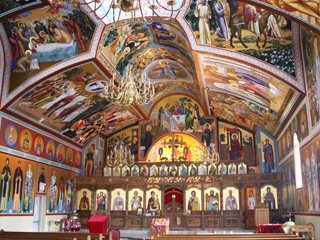 Little Ethiopia is on Bloor between the Christie and Ossington subway stops. Little Poland is on Roncesvalles, south of Dundas.

You can also take your house guests to some of Toronto’s amazing temples, mosques, and churches. There’s the BAPS Shri Swaminarayan Temple at Highway 427 and Finch. http://www.swaminarayan.org/globalnetwork/america/toronto.htm . Visiting hours are on: http://toronto.baps.org/info1.php#1.

The Fo Guang Shan Temple in Mississauga has guided tours in English on Sundays. For information on this Taiwan Buddhist temple with its beautiful statues, see website:http://www.fgs.ca/english/tour.html. We enjoyed our visit to the Ahmadiyya Muslim Community. Tel. 416-716-2247 to arrange a visit. The mosque’s web-site is: www.ahmadiyya.ca. It is north of Major MacKenzie Drive at 10610 Jane Street. 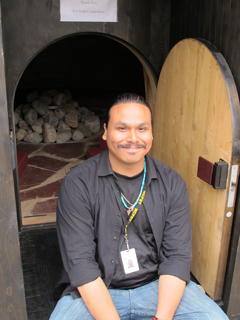 If they are interested in meeting people of our First Nations, they can drop in at the Native Canadian Centre at Spadina any Monday evening (but not holidays) at 5:45 to learn drumming. On Thursday evenings at 6pm, there’s the Big Drum Social where they can join the dancing and singing and meet people. The telephone number is 416-964–9087. The web-site is http://www.ncct.on.ca/.

Your friends or you can also experience a sweat lodge ceremony at the Native Child & Family Services, 30 College Street at Yonge. Tel. 416-969-8510.

I hope you find something here your guests want to do.