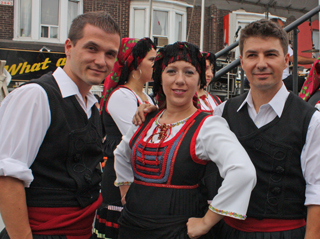 Again, a lot of free or nearly-free ethnic events are happening this weekend. How can anyone choose from such a huge number of opportunities? It looks like the weather will be cooler, less than 30 C. If you plan carefully, study schedules and programs, you should be able to take in much of what Toronto has to offer.

The biggest festival of course is Taste of the Danforth. It offers a lot by itself. It’s actually a multicultural festival in a Greek neighbourhood. You will find a lot of Greek restaurants and a Greek church, and groceries from Greece in its supermarkets. There’s even a Greek bookstore. One of the stages will feature Greek culture. 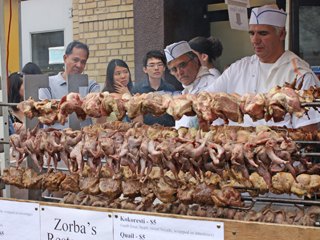 But the entertainment and food will be a mix of many cultures. In past years, there have been Kangaroo Burgers, Chinese and Lebanese food too. Food is only one of the attractions.

I like the Taste of the Danforth because you can take out-of-town guests there and say, “Look at the faces of the people here. This is multi-racial Toronto in one venue. We’re all having fun together. This is what we love about Toronto. 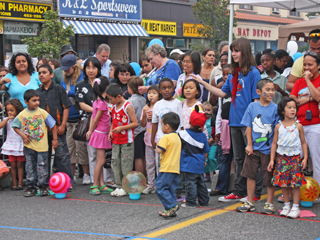 I also like the Taste of the Danforth because I haven’t seen any mechanical games and rides there. For the kids, it has had organized races and a climbing wall. It has had a volleyball court, and sports stars to meet. We were greeted one year with free hugs. The Toronto Symphony and Second City will be performing there this year.

You can get henna designs painted on your hands and feet, and massages. It’s more of a people thing. And you can get there easily by subway.

On Saturday and Sunday, the Filipinos will be making waves with a festival in Yonge-Dundas Square. They will have a parade on Sunday. There will mainly be Filipinos there and the parade and stage will feature some of the many colourful cultures of the Philippines. We used to live in the Philippines and loved the people. How can I miss this festival?

On Saturday and Sunday also, a Jerkfest will take place at Centennial Park, with jazz and reggae, dances and giveaways. It’s a hard place to get to unless you have a car. But for lovers of genuine Jamaican food and music like me, it should be a winner.

For more serious-minded people, Saturday is also Hiroshima Day. The campaign against nuclear weapons is especially apt this year because of the Japanese tsunami in March. The Church of the Holy Trinity is hosting a No Nuclear Weapons, No Nuclear Power, Hiroshima/Nagasaki commemoration. This church is on the west side of Eaton Centre, between Dundas and Queen Streets. This is an important event too.

On Sunday afternoon, there’s a Japanese Garden Club flower show and bonsai demo. It’s in Scarborough and costs $5, but Japanese gardens are famous and shouldn’t be missed.

This week is also the first week of Ramadan, the Muslim month of fasting from dawn to dusk. It is a good time to learn why our Muslim neighbours observe this tradition.

Harbourfront will have an hour of Music from the Middle East with Sufi devotional love songs.

For details on these events, please consult www.TorontoMulticulturalCalendar.com. Have I missed anything? Can I see it all?