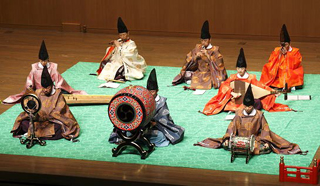 During the two hottest days of the summer, the Japan Foundation hosted a couple of remarkable events. In its beautifully air-conditioned auditorium, it gave performances and talks about ancient Japanese theatre.

Ancient arts historian Dr. Michiko Hirama brought to life the differences between the four traditional art forms. A large screen danced with colour, intriguing masks, and costumes while she explained their specific meanings. She elicited laughs at our cultural differences; for example, for Japanese people, making eye contact is considered very rude. 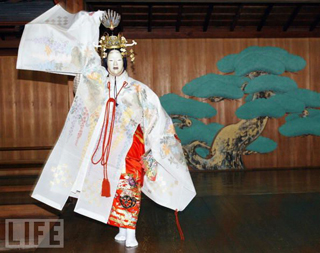 Stemming from Buddhist and Shinto tradition, the first talk was on Gagaku and Noh. They have a common style with no change of facial expression. Masks, music, and the body of the dancers portray emotions. A mixture of Chinese and Korean theatre, ancient Japanese theatre began with Gagaku 1,300 years ago. The others are dated at least 500 years later.

Because of their spiritual origins, Gagaku and Noh were often about ethical problems of every day life. Audiences would cheer their solutions.

Men performed all acting roles in these four styles. It is the same today. Men specializing in female characters or onnagata were and still are revered like rock stars. Noh masks are famous for their beauty. One mask depending on how it is held, might express many different feelings. A skillfully-lit shadow might give another emotion.

Dr. Hirama explained why a general wore a scary mask in one Gagaku play. The general actually had an inferiority complex he wanted to hide. I was entranced by it all, carried to a different time of exquisite beauty and emotion. It was very different from watching western theatre. The music seemed to open up emotions I had been hiding for years. The instruments were as beautiful as they were unique.

The second evening proved to be just as interesting and different from the first. Both Bunraku and Kabuki theatre are very colourful. Very elaborate makeup is used in Kabuki as well as heightened dramatic gestures. Some Kabuki actors, like current star Bando Tomasaburo, are so popular, they might also make guest appearances in favourite TV soaps and dramas. In one Kabuki performance he changes personality and costume in a second with stunning talent.

Bunraku is a slightly younger form of theatre from the late 1600’s. It uses puppets. These are around three feet tall and are usually handled by three puppeteers. The main puppeteer is allowed to show his face. His two assistants are all dressed in black.

The sets are elaborate.  We saw four puppets and their corresponding puppeteers in a boat rocking back and forth. This was so effective,  it kind of put our modern HD screens to shame.

Kabuki was founded in the 6th century during a productive period of prosperity. People were able to eat three times a day and looked forward to being entertained. These ancient forms of theatre are unfortunately dwindling in popularity in today’s Japan. This is due to the high cost of maintaining specialized theatres, expensive props, costumes, and a large cast of actors singers/story tellers and musicians. These companies find it very difficult to travel due to the specific needs of each type of theatre. 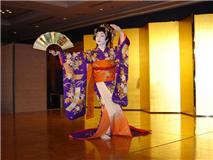 Fortunately western interest is peaking and this may help to keep these theatres open.  A pamphlet on the two talks was a welcome reminder of all that we had learned.

Each year the Foundation has brought a number of Kabuki HD films to Toronto cinemas. In 2012, you will be able to catch a unique Bunraku performance.

For those who wish to understand more about Japanese theatre, the Foundation offers free membership which includes free entrance to all exhibits and a large library full of film, videos, books, and journals to be viewed there or taken home.

The Japan Foundation’s web-site is: http://jftor.org/index.php .