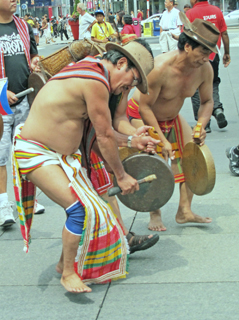 The Filipinos Making Waves Festival was calm when I arrived on Sunday last to catch its parade. The evening before, I had glimpsed this festival from Eaton Centre, and Yonge-Dundas Square looked full. Not so at 1pm on Sunday, when the square was almost empty. The parade also seemed shorter than the time I saw it a couple years before. It was headed by two of Toronto’s mounted policemen. The only music was from the gongs of the parade’s aboriginal participants. No spiffy marching band this year.

The Parade consisted of beauty queens, policemen, and representatives of Filipino organizations such as nurses and seniors. Most of the colour was from the beautiful clothing worn by the representatives from Kalinga province, a group descended from headhunters. There were also people from Bontoc, a municipality near the famous rice terraces. I’ve been to these places myself. The textiles were genuine. 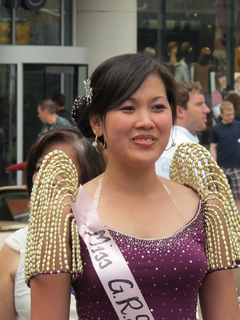 The crowd in the square was small. It was too bad so few people were there to enjoy the excellent singers. The M.C. mentioned the 1986 People Power Revolution several times. It overthrew the dictatorship of Ferdinand Marcos without any fatalities. Marcos had forbidden the singing of one of the songs sung before his overthrow. As a young woman sang it, I felt its history deeply.

The usual vendors were there offering tee-shirts, jewellery and clothing. The food of course included sigig, mechado, pancit and lots of fresh corn. At one booth a group of young Filipino-Canadians were concerned with the dissemination of “critical” Filipino history. They claimed that the current history taught is mainly from American sources with Americans as saviours of the Philippines. The Kamalayan Konsciousness people organizes workshops to promote history from the point of view of Filipinos. It is trying to instill historical pride in Filipino-Canadians.

The concept sounded familiar. Many of Toronto’s cultural groups also feel a need to develop their own histories. This Filipino website is: www.kamalayankonsciousness.tumblr.com .