171. International Window Shopping at the CNE 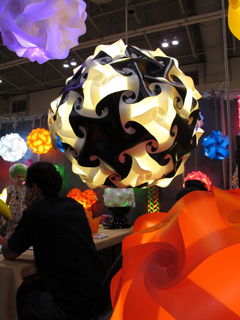 Had fun yesterday at the CNE’s International Pavilion. Unfortunately, the Black Angels Acrobats didn’t arrive in time for their opening show. They were still flying in from Kenya. The Villa Marka group from Ecuador, due to play later, filled in for them. This Ecuadorian group was basically the same as other groups of Otavalo Indians who play pan flutes in various places around Toronto from time to time. This group played especially well, and had giant-sized flutes.  They did look very handsome in matching black and red shawls. The large crowd enjoyed them too. They will be performing again.

The Kenyans are supposed to arrive today, Saturday. I hope so. I am anxious to see African acrobats for the first time.

The Ecuadorians played on the International stage in the middle of Hall B of the Direct Energy Centre. This is the International Pavilion. It was intriguing just walking the aisles and talking with the many vendors. Most of them had come from abroad just for this and other Canadian shows. They were not locally based like the vendors at our other ethnic festivals. They had a lot of new things on sale. 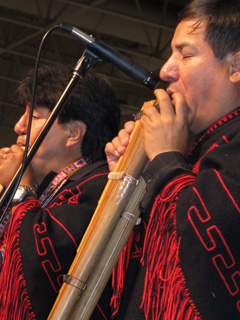 There were Hindu gods and Tiffany lamps at Balkh Trading, masks and wooden giraffes from Kenya, and fantastic jigsaw lamps designed by a Dane. A Pakistani booth was selling salt lamps and amazing wooden baskets that could collapse and lie flat like a trivet. A Thai booth had a meter-high Buddha for sale.

The health care people were out in full force selling diabetic socks and Shin Bio Heat packs, which would have been great for my sore back. I envied the people getting back massages. They looked so relaxed. But no, I was determined to avoid spending any money. This Blog is about free or almost-free events, after all. 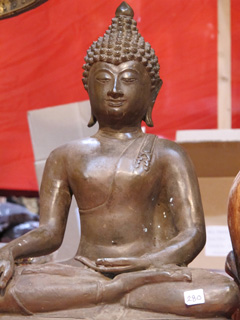 Prices seemed reasonable and were easily negotiable. Maybe it was because it was the first day, and some vendors want to make a first sale quickly. In Asia, it means good luck for the rest of the day. The first asking price for a leather purse was sixty-nine dollars. All I had to say was “I don’t have the cash,” and it went down to $60. It probably would have gone down even more if I made an effort.

Okay, I couldn’t resist a $25 set of King-sized sheets with four pillow cases from China. Now that I’ve washed them, they look more polyester than “Egyptian” cotton. I guess that one wasn’t much of a bargain.  I should have stuck to my original plan.

I’ll be going back to the Ex again to look at the other International performers. I’ll certainly spend more time window-shopping.