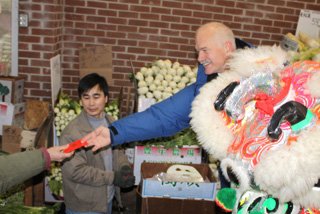 I will never forget Jack Layton passing out red lucky money envelopes in the Gerrard Chinatown in 2009 in the snow. It seems he did it every Chinese New Year when he could. He followed the lions, the drums and the cymbals up and down the streets. It was a real Chinese tradition. The lions brought luck to the merchants there. Jack Layton brought luck to everyone to whom he gave an envelope. He brought out their smiles too.

The envelope did not contain money – which is the Chinese custom. But I think there was candy inside, which is a good substitute.

Jack not only showed up at the Chinese festivals, he showed up at many other ethnic festivals. I kept finding him in my lens as I covered as many festivals as I could. He and Olivia were even at the Good Friday Procession in Little Italy earlier this year. Sure, it was what a good politician had to do, but he didn’t have to – especially when he was walking with a cane then.

Multicultural Toronto thanks him and will miss him.