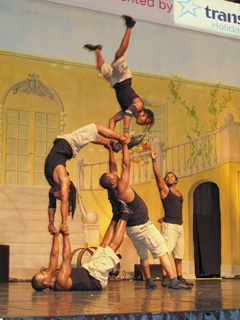 The Black Angels Acrobats in Hall B of the Direct Energy Centre were not as disciplined or as skilled as Beijing acrobats. They were a lot more fun though. I can understand why they’ve performed with the famous Harlem Globe Trotters basketball team. The Kenyan team has the same spirit of playfulness as the Harlem group.

The Angels are displaying their rope jumping, hoop diving, and goofy pyramids daily at the CNE. Their shows will be at different times each day until September 5. A schedule is posted beside the International Stage. 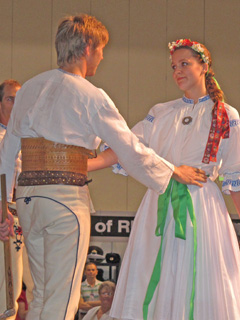 The Jasenka Czech Dancers who also performed on Friday were enjoyable. Their six-piece band, singer, and enthusiasm were delightful. Both are worth planning your explorations of the International Pavilion around. Their shows are also on Aug. 28, 29 and 30th. The South Africans have now left.

The CNE imported all these groups along with the previously-mentioned Ecuadorians from abroad for its International Stage. Local ethnic groups will be performing there to. I expect ours will be equally entertaining. 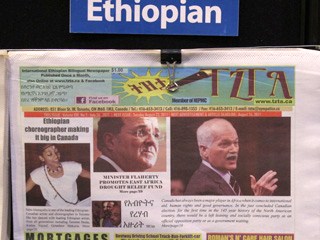 I discovered an exhibit of the National Ethnic Press and Media Council of Canada. It’s east of the sand castle competition and garden show in the Direct Energy Centre. It’s interesting to see some of the 480 ethnic publications we produce in Canada. Many of these are based in Toronto. Most are not in English but you can take home copies to try to figure them out. Pictures of Jack Layton are self-explanatory.

This Council is another example of our multiculturalism. Among its several noble objectives is the promotion of journalism excellence. Pick up a copy of its brochure to learn about its history, too. It had a representative on hand last week who could answer your questions. After I got home, I had trouble connecting with its web-site: www.nationalethnicpress.com. Its telephone is 416-921-8926.