175. Drum and Dance Festival in Mississauga 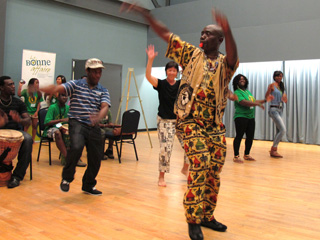 Too bad there weren’t more participants on Saturday at the annual Drum and Dance Festival in Mississauga. It was a pity because we had two excellent teachers of African drumming and dance. Before I had to leave, we also saw over a dozen elegantly-costumed dancers in the Chinese tradition. And a trio of dancers from Madagascar.

Njacko Backo from the Cameroons opened the show. He explained the various musical instruments used in his village. They ranged from cow bells to the kalimba. The latter is known as the African piano, he said. It is tiny and portable. I’ve seen the kalimba played by buskers in Toronto’s subway stations. 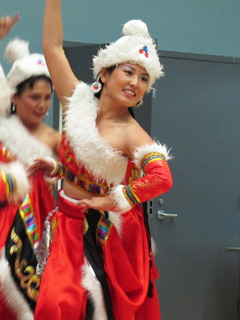 Teen-aged and younger children picked up the rhythm of the percussions quickly. They accompanied the adults who followed Njacko’s relatively simple dance movements. Later Jean-Paul Beche Ako taught us dances from the Ivory Coast. It was a good workout, and I would recommend both these men if you ever wanted to learn African dance.

It was great to see people of three different races learning African dance together.

The Chinese dancers were women from the Kaleidoscope Chinese Performing Arts Society. They performed three well-polished dances in brilliantly-coloured costumes, among them Uighur and Tibetan. Chinese dances are usually performances. The audience doesn’t participate in them. They are a different concept from African dance. The African women beside me kept exclaiming over and over, “They are so beautiful!” 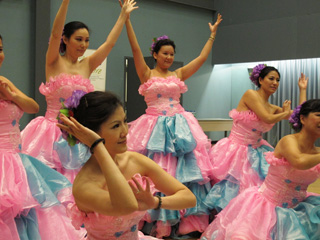 I had seen the Tsingory folk dancers from Madagascar, the week before at City Hall. I would have liked some explanation of the graceful movements of the two women. The one male dancer had an athletic but curious role.  Next time, I’ll ask.

There were only about 25 people in the audience. It was sad. It was such an opportunity to meet the teachers and to learn about these arts.  The Chinese especially had gone to a lot of trouble for only a few people.

I had to leave after two hours. I missed out on groups from other parts of Africa and modern African dance. Africa, like China, covers a big area. They are multicultural too, and their arts are very different from region to region. I hope more people will attend this festival next year.