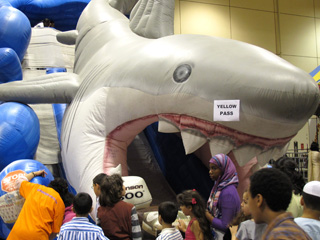 I had been wanting to see how Toronto’s Muslim citizens celebrate Eid, the end of their Ramadan month of fasting. I’ve lived in a couple of Muslim countries and found their  celebrations rather gloomy. I had heard that the Eid festival was different and joyous. It was.

My first problem was deciding what to wear. I knew Muslim women didn’t wear trousers so I decided on a floor-length skirt. I haven’t worn a skirt in years. I put a scarf into my back pack and made sure I had a thick pair of socks on. If I had to take off my shoes and walk around, I wanted to be comfortable. 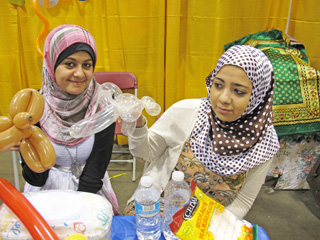 The announcement said the event was free but asked families to bring “a bag of non-perishable food for food-drive boxes.” Metro didn’t have a halal section, nor a kosher section. I settled on rice. When I arrived at the Metro Toronto Convention Centre, no one else seemed to be carrying any food. It took about five minutes to find a place to leave it.

The huge room was indeed festive. To the right were gigantic, inflatable slides and rides for the children. There was a giant dinosaur, a shark, and Dora the Explorer. Families were enjoying a giant swing – similar to one I’ve since seen at the CNE. On a stage, a magician was eliciting squeals of delight from the children. Later they watched a cartoon about zebras. A huge section was full of tables and chairs where families ate. Stalls were selling kabobs and shwarma dishes, pizza, chocolate-dipped fruit, and cup cakes. 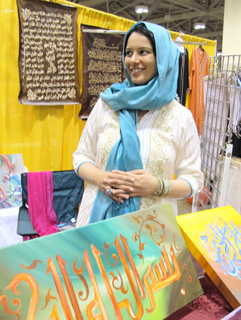 Another part of the gigantic hall held stalls selling jewellery, Korans and other sacred books, and elegant gowns and head scarves. A wholesaler was offering mountains of marshmallows and cookies from the Middle East. Did you know that marshmallows were invented in ancient Egypt?

The floor of the other half of the huge room was covered with sheets of card board. Here people prayed shoeless, oblivious to the secular activities. I didn’t want to disturb the prayers with a camera.

Most women were dressed in brightly-coloured floor-length robes. The rest were in black – but black decorated with sequins and jewellery. On most female heads were beautiful, fancy gold shawls or head scarves, each different. They looked elegant.

Some of the men wore the red-and-white checked kafiya I associate with Lawrence of Arabia. They looked splendid in white robes. Others wore pill box caps or turbans. But most men wore sport shirts, western suits or jeans The variety of ethnic clothing was amazing. In North India, Kazakhstan and Pakistan, all the men seemed to wear the same-styled regional clothing.  Toronto had variety. 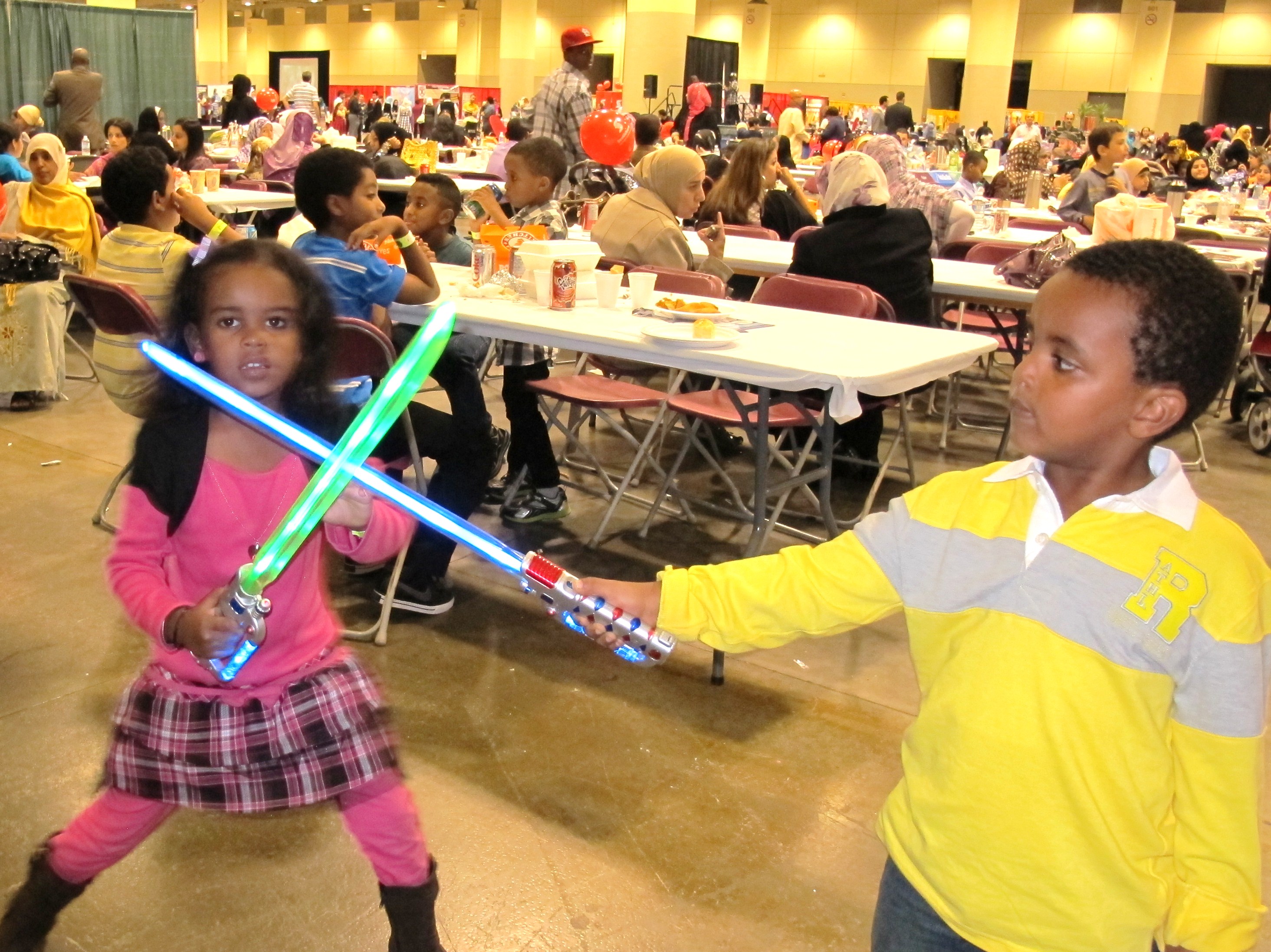 I spent a lovely two hours watching children sword-fighting with lighted plastic batons. I went from booth to booth talking with merchants and taking pictures. Only three people said no when I asked for permission. Most seemed happy to pose, especially when I told them about my blog. I felt at home, even though I seemed to be the only Chinese person there. Everyone spoke English.

I met a calligrapher, the creator of a stunning, multi-hued plaque in exquisite Arabic script. She said she loved painting pictures of mosques and churches. I studied the different styles of head scarves and listened to the amplified prayers, and appeals for parents of lost children. The games, eating and selling went on even during the prayers. I didn’t need to take off my shoes. 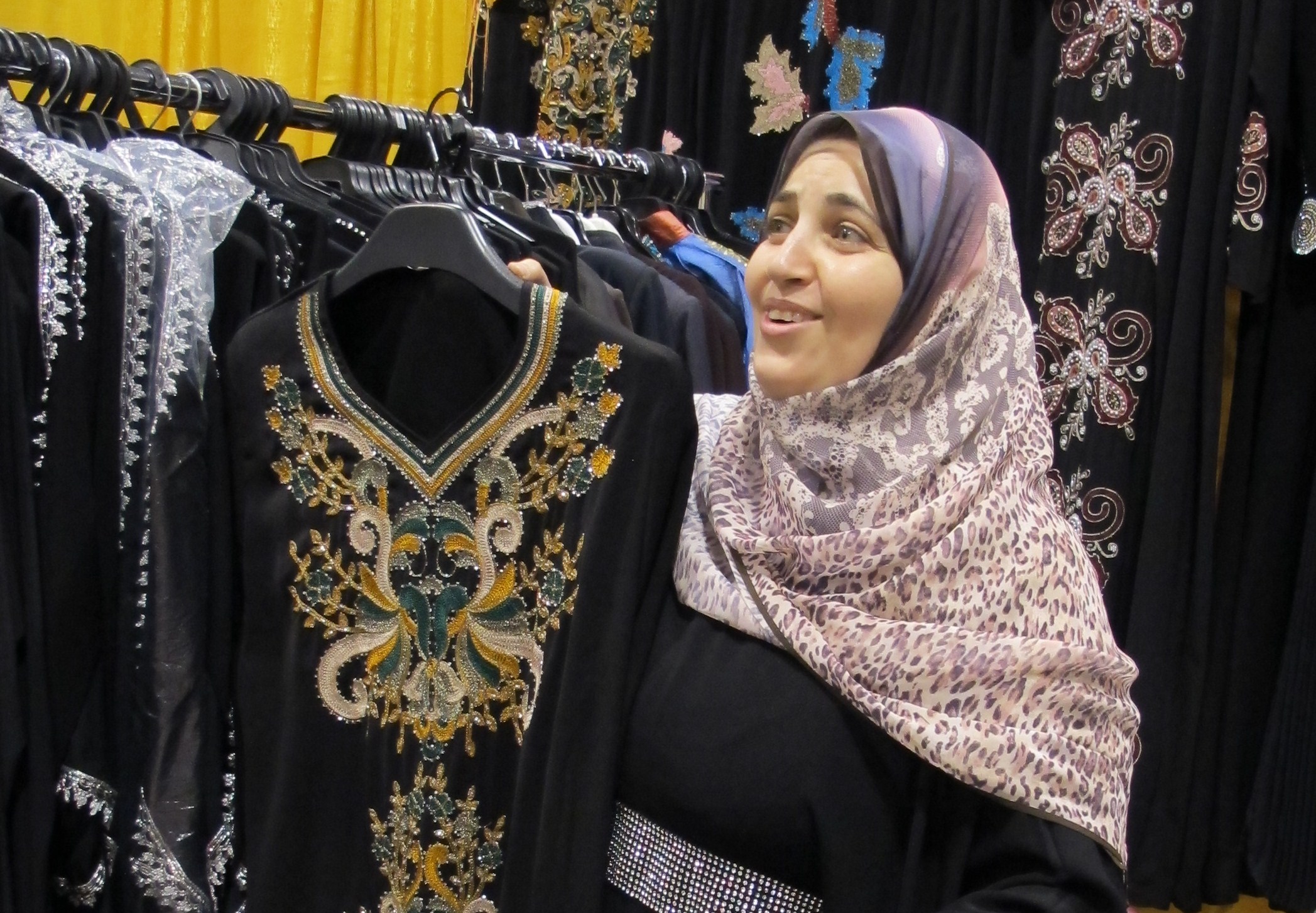 I sat at a table with Fauzia who had arrived from India six years ago. She talked about women’s faces, arms and bosoms as “adornments” and how some women preferred to cover them. She said that Arab women wore black and Africans wore clothes of many colours. She herself was wearing a bright blue Punjabi tunic and trousers. I noticed then that almost all the women were wearing long sleeves, a requirement for prayers, she said.

On the way out, I met a beautiful woman, wearing black with a gold, net head scarf. She didn’t look Arab. She said she was born in Canada and her mother was black and her father was half Chinese. They were from Guyana, she said. “I wear black, because it makes me look skinnier.”

It seems that our Muslim community is multicultural too.