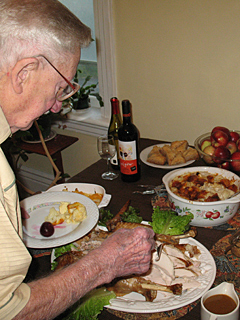 Oct. 7 to 10 includes Canadian Thanksgiving, the Jewish Yom Kippur, a book launch on Islamic culture, and a huge “Diwali Fiesta.” (I hope you caught the Spanish on the Indian title! Multiculturalism is catchy.)

This weekend also has the Republic of China’s Double-Ten National Day and a pow wow at the Native Canadian Centre. There are probably more events which I’ll add later. Please let me know about them so I can put them in www.TorontoMulticulturalCalendar.com . You’ll find details for the above already there.

Our First Nations have been celebrating a thanksgiving at this time of year for ages. It’s been a holiday on the second Monday of October in Canada since 1957. Many other cultures have a day of thanks to the powers that be for bountiful harvests and good fortune. All Toronto churches will have special hymns, prayers and decorations.

For many of us this weekend, it’s a time for family feasting. Turkey and cranberry sauce will be on the table. The Yom Kippur celebrants will be fasting. Schools, stores, banks and offices are closed on the Monday.

On Friday, Timothy Gianotti’s book In the Light of a Blessed Tree will be launched at the Noor Cultural Centre. He is a scholar and interfaith advocate associated with York University. You can meet him and ask him questions about what Islam has in common with other religions.

Sunday has a big Diwali celebration. This one’s at Airport Road and Steeles. It costs $7 but you get a coupon for $5 worth of food, so it’s really cheap. Expect lots of colourful costumes, dances and music. Many other Diwali events will take place this month in case you miss this one. Look at: http://www.deepavali.net/canada.php .

Diwali is the Festival of Lights. The religious events take place in Hindu temples on Oct. 26 and 27. One of these will also shoot off fire-works. 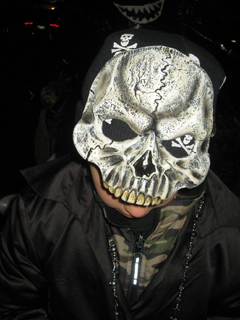 I couldn’t find any listed events for Taiwan’s Double-Ten but any excuse is a good excuse for eating Chinese food. For those who can’t afford a banquet, you can pick up tea and pastry at my favourite bake shop, Furama, at 248 Spadina Avenue just south of Dundas. It has branches in many other locations around the city. I go out of my way to get one of their egg tarts when I’m in that Chinatown. Dim sum is relatively cheap too. In the same neighbourhood is the Sky Dragon at 280 Spadina Ave. in the top of the Dragon City mall there. They have cruising carts.

Harbourfront has a Monsters theme this weekend for kids. This seems to be related to Halloween, another Toronto tradition that’s at the end of this month. Harbourfront includes Monsters around the World, so it fits into this blog. See: http://www.harbourfrontcentre.com/whatson/week.cfm .

I hope you’ll take advantage of the promised good weather and get out of doors to enjoy the autumn leaves. You can look for migrating hawks in High Park (just north of the restaurant). Both are Toronto traditions.