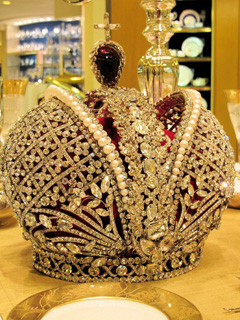 I thought about it afterwards. This is Canada’s heritage too.

“The World’s Most Beautiful Crowns” is on for free in Toronto from October 19 to 30. It’s made up largely of reproductions, but they are fascinating. Of course I want to claim them as our heritage too.

As for culture, their uniqueness says it all. You might be able to tell from the style or shape what country or region each belongs to. Take a guess before you look at the titles. 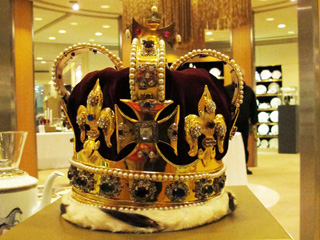 Canada has been a monarchy under the British Crown since the eighteenth century. We can rightly claim the British State Crown, and a couple other British crowns in the show, as part of Canadian history.

The most stunning is the Imperial Crown of Russia, commissioned by Catherine the Great in the 18th century. The original had 7,500 diamonds and 75 pearls. You need sun glasses to see it today, it sparkles so much. We have 250,000 people living in Toronto who claim Russian as their first language. I doubt that any of them are tsarists, but Catherine the Great is part of their history – and by extension, ours. 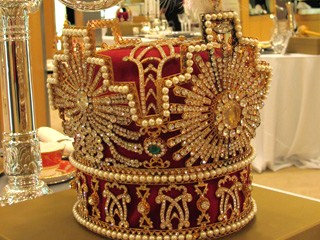 Then there’s the Pahlavi Crown, used by the Shah of Iran in 1926 and his son in 1967. Its design was inspired by the Sassanid dynasty that reigned from 224 to 624 AD. There are about 46,000 Iranians in Toronto. Many of their lives were affected by the Shah and his successors. They may have rejected Iran’s rulers, but the Pahlavis are part of their history – our history because these Iranians belong to Toronto now. 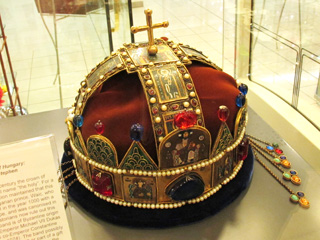 You can apply this logic to all the other countries represented. I found over 20 different crowns including one from 12th century France and one from 14th century Sicily. The crown worn by almost all German emperors of the Holy Roman Empire up to 1792 is there. Amid its jewels are pictures of Christ, Isaiah, David and Solomon. On top is a prominent cross.

A cross is also on top of St. Edward’s Crown, which Queen Elizabeth the First found too heavy to wear. Most of the crowns are made of metal so the problem of weight must have been universal. The reproductions are the actual size.

The tallest crown is the Jewish Torah Crown. It wasn’t worn. It was carried around the synagogue, its bells ringing. The list of crowns includes that of the Dalai Lama, but I couldn’t find it.

Some of the crowns are displayed in glass cases. For these, picture-taking is difficult. Most are in the open surrounded by William Ashley’s elegant tableware.

William Ashley is on the Ground Floor, 55 Bloor Street West in the Manulife Building between Bay and Yonge Streets. The display is open during store hours.