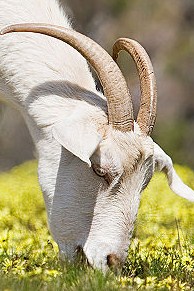 Muslims who can afford it should sacrifice a goat, sheep or cow. Heads of households should slit its throat with a knife, properly, at the jugular, to minimize its suffering.

This is an essential part of celebrating Eid-al-Adha, a three or four-day Muslim festival that starts November 6 or 7 depending on which of three schools of date calculations one follows.

They can also just touch the knife before someone else kills the animal on their behalf. That connects them to the ritual. It makes them aware of where their food really comes from. “You are taking a life in the most humane manner possible,” a Muslim friend told me. 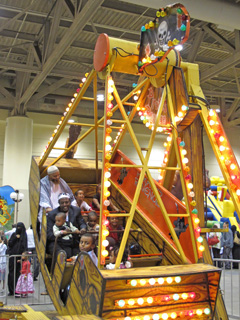 The Eid-ul-Adha (the “Feast of Sacrifice”) is the Great Festival of Islam, a joyful occasion. It is a time to congratulate Muslim friends and constituents with a “Happy Eid-ul-Adha.” If you want to make your Muslim friends happier, you could say “Eid Mubarak” in Arabic.

Eid-ul-Adha commemorates Abraham’s willingness to sacrifice his son to God and God’s merciful substitution of a ram instead. The story is in the Old Testament as well as the Koran. (The Jewish holiday of Rosh Hashanah has similiar roots.)

Eid-ul-Adha includes special prayers as well as the sacrifice of an animal. In the time of the prophet Mohammed, it could be a camel too. The festival is related to the once-in-a-lifetime pilgrimage to Mecca.

It is a time for thanksgiving, compassion and forgiveness, and the exchange of gifts. Every Muslim home is required to share the meat with relatives and the poor.

The sharing can be monetary. “We give to charities like the Toronto Food Bank, the Muslim Women’s Shelter, and the Edhi Foundation,” said my friend.

Connected with Eid-ul-Adha are many cultural events. The night before, Muslim women might get together and decorate themselves with henna designs. They wear their best clothes at the festival. This gives the rest of us a chance to see some beautiful robes and tunics in one venue.

Each mosque might have its own festivities aimed at families and visiting with old friends. The best places for non-Muslims to experience the holiday are those in downtown Toronto at the CNE or Metro Convention Centre. Dates and venues will be announced later this month. The biggest ones are those organized by the Muslim Association of Canada, the Islamic Society of North America, and the Islamic Circle of North America.

Of these events, said another friend, “You don’t have to take off your shoes or worry about how to dress as long as you dress modestly. A mosque might be intimidating to outsiders.” You do have to take off shoes in the prayer area.

Other events with vendors and family fun related to this festival will be on November 6 and 7 at the Maple Banquet Hall and International Banquet Hall, both in Mississauga. These are free but there will be an opportunity to donate to help Pakistani flood victims.

Interesting is the well-organized Muslim Womens Preneurs on October 30 also in Mississauga. It says, “Our aim is to exhibit the creative talents of Muslim womenpreneurs in an affordable and exciting way.” It will have lots of vendors, face painting, henna, and food. You can learn various ways to tie a hijab, those elegant scarves worn by many Muslim women. Its list of vendors is already on its website.

Dates, venues and times for these opportunities to meet your Muslim neighbours will be on my www.TorontoMulticulturalCalendar.com as soon as they are available. A description of my adventures at the Eid Al Fitr celebrations last August is on: http://bit.ly/qzNE7i . Please tell us about your adventures there.