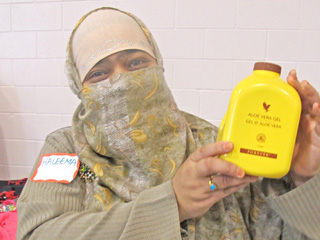 Muslim Women Preneurs last Sunday was a lot of fun. It was better than markets I’ve been to in Egypt, Jordan, and Pakistan. There, the sales people were all men. In Egypt they grabbed us by the arm and dragged us to their stalls. It was not pleasant.

So it was wonderful to walk into a Muslim market in Toronto. It was in the ISNA mosque complex in Mississauga. The event was well organized. When we registered, we received a bag of goodies like candy, dried fruit and nuts, tooth brush and sample paste (with advertisements from a dentist, of course), discount coupons, and other commercial literature. 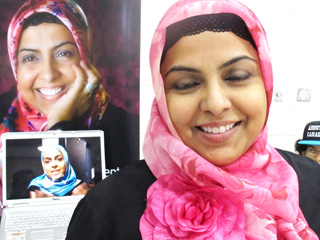 As we walked around the booths in the banquet hall, we were greeted with feminine smiles. The come-ons were gentle explanations of their goods: beautiful bed covers from Pakistan, handmade jewellery, delicious-looking cup cakes, head scarves, cosmetics, tunics, and robes. One woman offered to show me how to wear a head scarf even though I didn’t buy it from her booth.

In Middle Eastern style, I bargained the price of a scarf down in one booth. At another booth, the $10 asking price for a pin didn’t come down, but a tag on the back of the pin, read $16.00. So it was a bargain. The prices were good. 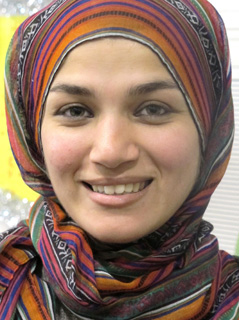 Many of the vendors work out of their homes. One gave us home-made samples of cake. A clown kept the children amused. A short fashion show of Bedouin costumes from Egypt appeared on stage. We were too early for the hijab-tying demonstration, alas. But everyone was helpful. Many women offered to show us how to do it. Many even posed for pictures of the different styles, and said instructions were on the Web.

Hijabs don’t slide off the head like Punjabi head scarves do. The secret? Two fancy, strategically-fastened safety pins. I think hijabs look elegant. A beautiful pink one with a rose one led me to Fatima Omar Khamissa, a “spiritual life and marketing coach.” Her spiel on how to use the social media and personal empowerment was wonderful.

I’m looking forward to the next Muslim market. It looks like they take place twice a year. They don’t take credit cards, so bring cash. For more information, click on: http://bit.ly/rYSezs .