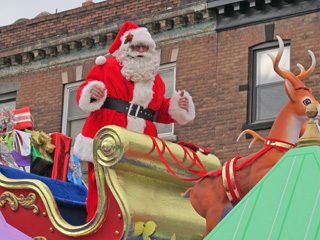 I managed to take in the Santa Claus Parade and the Swedish Christmas festival, both scheduled for the same time this Sunday afternoon. It was not difficult. The trick was showing up 20 minutes early at the beginning of the parade route (Christie and Bloor). The performers were standing there waiting and I could walk the length of the parade, taking all the pictures I wanted. Well, almost. I was after multicultural, multiracial parade pictures. There were Filipino, Ukrainian, and Portuguese bands, and kids of different races dressed as tigers, princesses, or upside-down clowns. I wished there was an even better mixture of races. Some of the floats were entirely lily-white alas. In less than an hour, I shot all I needed, including a white Santa Claus. 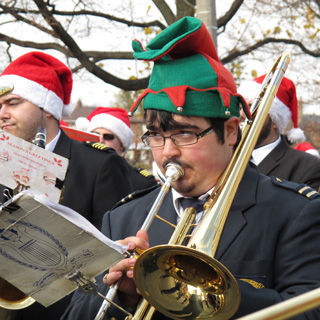 One young teenager who looked Middle Eastern stopped and asked if I had taken her picture. When she found it on my camera, she asked me to delete it. She was dressed in costume – and I wondered how she was going to stop everybody else from taking her picture. I wondered if her father knew what she was doing.

The Santa Lucia festival was scheduled for 3pm at Harbourfront. This even gave me time to try the famous Swedish open-faced sandwiches – choice of pate, smoked salmon, or cheese. The pate was delicious. I ignored the pastries and meatballs, and settled on ginger-bread cookies, a traditional, seasonal favourite. The grog, the mulled Christmas wine, was available under orders of LCBO in another room. It was there along with Swedish souvenirs, little wooden angels, houses, and candy bars. People were selling raffle tickets, the top prize of which was a trip to Denmark for two, with two nights in a hotel there. Alas, I didn’t win. 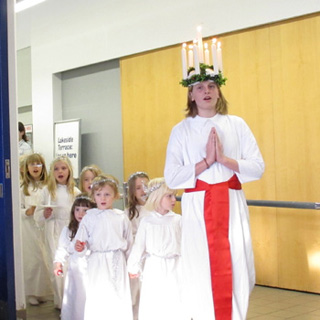 There was time too to see the children decorating gingerbread cookies and dancing around an imaginary Christmas tree.

The folk dances and choir were lovely, as usual. Santa Lucia came into the auditorium with real lighted candles on her head, followed by a retinue of delightful little girls in white. They sang Swedish Christmas carols while we wondered how long the saint could keep the flaming lights from burning her hair. I’m sure we all breathed a sigh of relief when she was able to take off her crown.

A Swedish man beside me explained that the one black man among the white dancers was from Rwanda and he spoke Swedish well. He had lived in Sweden. Now he was obviously in Canada. On stage, he didn’t miss a Swedish beat, nor did he seem to feel self-conscious. I loved it.