205. A German Christmas by Herta 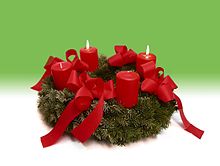 A few ideas on our tradition while I was growing up in Germany. Naturally, everybody had their own ways.

Four weeks before Christmas is Advent, a religious holiday. We always had a fir or pine wreath with four candles. On the 1st Sunday of Advent, we lit one candle, and sang Christmas songs, etc. On the 2nd Sunday, we burned two candles. This continued weekly until Christmas Eve when the tree is decorated and full of real candles too. To us, Christmas is really the celebration of the Christ Child.

On the first of December, we began opening the windows of the Advent Calendar – the countdown to Christmas Eve. Daily, a little window is opened with a picture in it. The last one on Christmas Eve shows the Nativity. 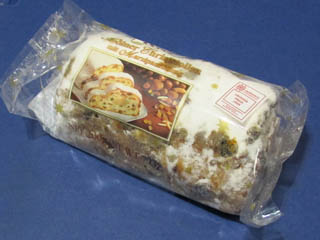 On Dec. 6Th, Santa Claus came to the house and was informed of everyone’s good and bad deeds. If you were good, you received some sweets and little presents; if you were bad, you received a spanking. If you had been very, very bad, Santa would put you in his sack and take you away. Usually, the kids would scream out of fear and eventually be released after they promised to be better in the future. About this time, one would write out a wish-list that would be picked up by Santa. You hoped that you got some of your wishes fulfilled at Christmas. 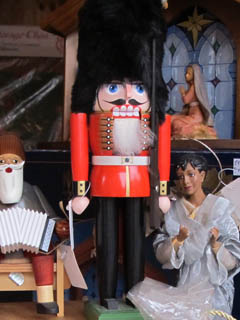 The Advent time was a preparation time for Christmas. Time was set aside to bake special cookies and Stollen (a type of Christmas-cake) and/or a Gingerbread house. You were also learning Christmas-songs, poetry, practising an instrument, making arts and craft as decorations, or presents. It was a joyful time! During this time, one would also try to visit a Christmas market with its special smells and lights. For the older members of the family, there was Gluehwein (spiced hot wine). The market sold pretty items, cookies and other goodies. We always hoped that we would have a white Christmas in order to go for a long walk in the snow.

Usually, on Christmas Eve, we went in the afternoon to our church service. The church had a large tree and star. When we returned home, somebody had decorated our tree and locked the door to the living room. The children patiently waited with the candles still lit on the Advent wreath. When a little bell rang and all was ready, we were permitted to enter the living room. The tree was a wonderful sight with its decorations and lit candles – such a warm glow. We all sat quietly around admiring the tree, singing songs, reading poetry, and stories. Someone might perform on a musical instrumental.

Later on, one at a time, we would open a few small gifts. We would always cautiously watch the tree so that no accident would happen with the candles.