210. A Report on a Hanukkah Festival of Lights Celebration

I once badgered my husband’s cousin to help me look for a menorah I could photograph. We found a simple one in a synagogue she had frequented as a child. We also found one in her own apartment building’s lobby – an electric one made of plastic. My hunt for a beautiful menorah had to continue.

When I read that Congregation Shir Libeynu and Kulanu Toronto were presenting a “Third Night of Chanukah” event, and “Please bring your chanukiah from home,” of course I wanted to attend. Chanukah is another spelling for Hanukkah. I guessed that “Chanukiah” was another word for “menorah.”

Last evening at the Jewish Community Centre, I learned that “Chanukiah” is the correct name for the Hanukkah candle holder and I found about eight of them.

I didn’t mention this event in my www.TorontoMulticulturalCalendar.com because the cost was not free or nearly free. It was $15 but if money is not a deterrent, I highly recommend that other Torontonians take part in such a celebration at the next opportunity. It was a beautiful cultural experience and people there generously answered a lot of my many questions. 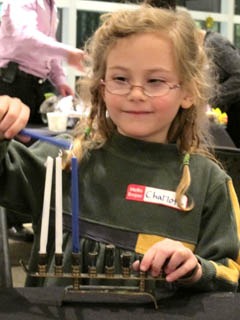 I saw children making cut-outs of Hanukkah symbols. A teenager named Jackie explained the history of the celebration. It first happened in the Second Century, BCE. “The Syrians who were Greeks at that time in what is now modern Israel were suppressing the Jews,” she said. The Jews revolted and upon regaining their temple, they found only one bottle of uncontaminated pure olive oil for their rituals. This was usually enough oil to light the temple’s menorah for one day. Miraculously, the oil lasted eight days, enough time for new oil to be prepared. 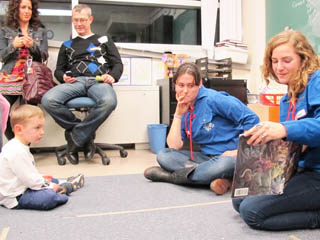 The first evening of the eight-day event, families light one candle. On the second evening, they light two, and so on. They pray and sing Hanukkah songs and share a meal of special foods in commemoration.

The oil explains why latkes or potato pancakes are central to the celebrations. Latkes are fried in lots of oil, and believe me, the ones we ate there were heavenly and crispy. We didn’t have them last evening, but Sufganyia jelly donuts are another traditional food. For the children, Tim Horton’s timbits were a substitute. There were plenty of other desserts and dishes. It was a magnificent feast. 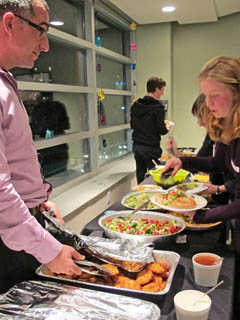 After dinner, we heard a funny story about the first Schlemiel, a Yiddish word that describes an awkward person. A Klezmer ensemble played Eastern and Central European Jewish music. The band even had a genuine mandolin. The music was reminiscent of Fiddler on the Roof. People got up and danced in a long line that wove its way among the many tables. The steps were simple. It was fun.

Then children lit the candles on all the chanukiahs there. I was so happy photographing them. They were beautiful. Each was different and suddenly I felt I wanted to make a collection of chanukiah images.

The group then sang Hanukkah songs in Hebrew but I had a translation. I learned about dreidels and the Maccabeans. I also learned later that I could get more of the delicious latkes from the Free Times Cafe on College Street.

But I wasn’t the only person there who was multicultural. I discovered that many Jewish people eat Chinese food on Christmas Day and a father and son team said they played table tennis with a club that was 90% Chinese. They knew a few words of the language. It was all very wonderful.