217. An Ethiopian Church in Toronto Answers our Questions 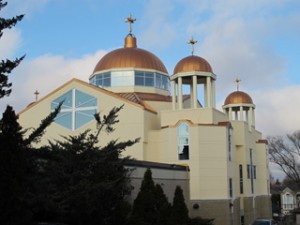 Earlier this week, I blogged about our visit to the Christmas eve service of St. Mary Ethiopian Orthodox Tewahedo Church.  I didn’t have much of a chance to ask questions at the time. An usher stood near us and was helpful, but I didn’t want to disturb the worshipful atmosphere.

Since it was Christmas, it was easy to guess what the chanting was about. But in what language?  What was the trilling about?  Why were there lions and leopards in a picture on the wall? The visit raised a lot of questions.

Afterwards, I had a talk with Alemayehu Zenebe, Program Coordinator of the church. This is the man whose welcoming manner encouraged us to make a visit there in the first place.

Alemayehu has been in Canada for 20 years.  He came as a political refugee and studied theology at St. Michael’s College, U. Of T. Back in Ethiopia, he had been a professional tour guide. 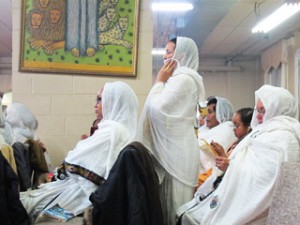 Yes, his church welcomes all people, not just Ethiopians, he said.  The next big festivals are Easter, and in September, the Finding of the True Cross.  But people are welcome at the regular service too, every Sunday from 8am to 12:30 or 1pm.  The best time to come for a glimpse is 10 to 11. After this service, it is a good time to meet parishioners (over tea, coffee, samosas and bread).

Some 30,000 to 40,000 Ethiopians live in the GTA. Different groups work together to put on Ethiopian-Canadian Day in September. This year it’s at Christie Pits on Sept. 11.  A paragraph about this festival in 2011 is on my blog: http://bit.ly/wVkHRv .

The language of the Christmas eve service?   Most of it is in Amharic. The mass is in Ge’ez. I read later that Ethiopia has between 77 and 90 different languages!

The bird-like trilling during the service? “Ululation” is done mainly by women. It is sung after certain passages and it’s the same as “amen” in other churches. The bottles of water under the picture of Mary and Jesus? They are there to be blessed during the mass, and then taken home.  The long sticks carried by the turbaned men in the choir? These “sistrum” are raised and lowered according to the pitch and tone of the chants. Sistrum have been used religiously since King David’s era. Ethiopian church music is unique. Ethiopian Christians were Jewish before they became Christians.

Yes, they do have “confession” and one must attend the whole mass or not at all. A few women were standing during the service because, in Ethiopia, there are no chairs except in modern churches. Chairs are meant for the elderly, infirm and sick.  In Toronto, everyone is tired so there are chairs.

The new church building will cost about $4.5 million in total, completely donated by the congregation. It will seat 900 and is on land bought in 1997. The church has two bishops, one monk, two deacons and six volunteer deacons. It also helps Ethiopians in need.

Later, I also met the Head Priest, Rev. Fr. Messale Engeda. He told me about his work among Caribbean Christians and how he was trying to bring them back to the church away from Rastafarianism. The emperors of Ethiopia were descendants of King Solomon and the Queen of Sheba. Rastafarians worship Haile Selassie, the last emperor of Ethiopia who died in 1975.

As for the leopards and lions in the pictures on the wall, that will have to wait for another occasion. I forgot to ask. Maybe you can find out about these if you go there. This is a rich culture, full of interesting stories, just for the asking.  See Blog No. 215 below.