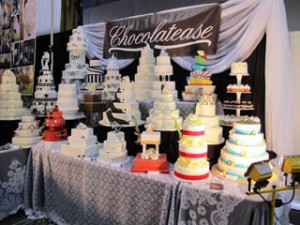 The fashion show at the Kismet Wedding Event last Sunday was a lot more fun than its rival, the Suhaag bridal show, the week before. It had fewer strutting models on display, but the M.C. picked seven engaged or recently-married couples out of the audience for contests.

Each of three South Asian couples had to put on a tie and a saree within 60 seconds. That contest was hilarious as the women spun in circles while the guys held the long meters of cloth. The women had to tie the ties onto their men. That effort was more graceful.

Another contest had two competing couples relating their own marriage proposal stories. The winner, based on audience cheers, involved a man who arranged for a Chinese restaurant to bake some fortune cookies. Inside the one he gave his girl friend was a slip that read, “Will you marry me?” 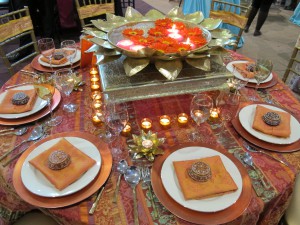 Only seven bridal couples appeared to be in the audience of several hundred people. The rest were women. The only other males were photographers. Of the four couples telling their stories, it was the women who spoke. The men were silent.

Are these Toronto trends?

The Suhaag show last weekend seems to have had more vendors. The Kismet show had some that were new to me. I chose a few booths at random and asked about prices. I was glad I didn’t have to pay for an Indian wedding.

At Frontier Heritage, a designer with a beautiful display of gowns, the prices ranged from $800 to $4500. Fancy traditional Indian suits for men could cost $800. “Women usually wore red or maroon for the wedding ceremony,” said Navi Arora. One bride might wear seven different costumes, one for the ceremony, one for the reception, one for meeting her new in-laws, etc.

According to Acappella Clothing, grooms only wear traditional Indian clothing for the actual ceremony. Acappella provided made-to-measure western-style suits from $795. 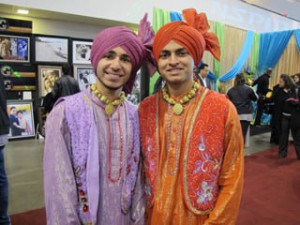 At Kinnery Ganatra, special henna bridal designs just for the hands cost $50. Some brides were decorating their backs, arms and legs too, so you can imagine how much all that would cost. At Beauty Concept, dressing a bride, hair, make-up and pinning a dupatta shawl on her head costs $450. For each additional person, like the bridesmaids, hairdressing, and make-up cost $150 a person.

A stretch limo that held 10-14 people (and a bar and television) cost $100 an hour at Rockstar Limo. A Hummer limo could cost from $600 to $1400 a day, depending on its use. At Nachdi Jaiwani, if you wanted Punjabi Bhangra dancers to perform, four guys cost $375, but you only had to pay $300 for four girls – which doesn’t seem fair. SGPD Entertainment was advertising dancers too, and a dhol or drummed entrance with an elephant.

Dreams Convention Centre was inviting everyone to its Open House with cocktails on Monday, February 20, from 5-9pm. That includes readers of this post. Dreams is in Brampton: RSVP telephone 905-451-1500 or 416-569-7371. It’s one of many palatial wedding venues springing up in Toronto’s suburbs. At another booth, table settings cost upward from $60 per person to rent. This was just for the table cloths, decorations, plates, glasses, and cutlery. Food was extra.

Chocolatease was giving free wedding cake sample – Wow! The icing had a lot of butter and was amazing.

Anderson Blake Security was advertising uniformed guards, house watch, and event security starting at $130 for six hours. With all the wedding gifts and jewellery-laden guests at big weddings, you do need security. 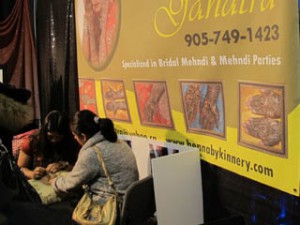 And photographers. Kismet had several represented. For $7500 plus, two creative photographers from Prince Singh Photography will take 2000 pictures. And then there’s the expense of the banquet!

Of course, you can have cheaper wedding services. But it’s obvious, some people are willing to pay top prices. Lucky you and me if we get invited to a fancy Indian wedding! But there’s a catch. We’ll probably feel obligated to give an expensive gift. A booth at Kismet took care of that too. The Gift Network Registry says it covers 115 other gift registries. You just have to go to that one to find out what the bridal couple wants.