Sandra McCallum recently went with Ruth to a festival at Sri Ayyappan Hindu Temple in  Scarborough. She writes: 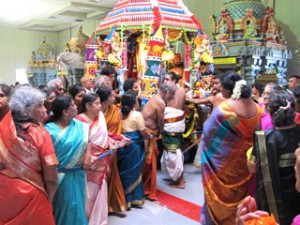 As we entered the temple, I felt very much a stranger in a strange land. I have never visited a Hindu temple before and the statues and the symbolism meant nothing to me. All around the edges of the temple, there were big shrines, towering over the people, big enough for two men to sit inside – and in the middle of each shrine there was a statue of a god.

Because it was Tamil New Years, one of the shrines was being moved around the temple,  by people pulling on a rope. They circled the temple stopping for 15 minute intervals at each quarter. Inside this shrine, a man was sitting beside the statue. I assumed he was a priest. He had a candle in his hand. Sometimes he would hand out a tray that held several burning candles.  Another priest would carry that tray of candles out to the people who were near the shrine. The people would put their hands over the flame and then they would touch their faces. I don’t know what this meant. 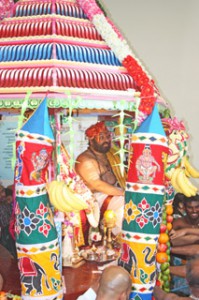 In the centre of the temple, there was a shrine which was like a small house.  It was obviously a permanent structure. Inside there was a statue of a god and there were two priests attending. People were lined up in front of the shrine and when they got near it, some of them would hand the priest a piece of green paper on which they had written their name and  date of birth. The priest would carry that paper up to the statue and place it in a box in front of the statue. When the priest came back  he brought a tray with him that had something in it.  He would put his finger in the tray which held a white sticky material. He would then touch the forehead of the person who had given him the paper.

The people also brought fruit as an offering to the statue. The priest would take the fruit and place it in front of the statue. Eventually, he brought it back to the person who had given it. I asked someone who was standing there about this. The fruit offered was a symbol of what the believer had to offer of his life. The name written on the paper was a petition. A common request was for happiness. The priest’s touch on the forehead was a blessing from the gods.

I came away  still feeling very much a stranger in a strange land, but it was interesting to have been there. Two or three people smiled at us  as if in welcome, and if we asked them questions about what was going on, they were happy to explain. 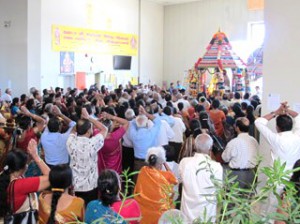 The New Year’s Festival was a religious ceremony which appealed strongly to the senses.  There  was colour everywhere, in the shrines,  the robes of the statues,  the saris of the hundreds of women who swirled around the shrines. Drums and horns followed the moving shrine. People touched their own foreheads and the priests touched the foreheads of those who made a petition.

I wondered if different people were worshipping in different ways.  Near the permanent shrine there was always a line of people with petitions and offerings, but there was the occasional young man who was taking no part in this.

The young man would sit on the floor facing the shrine but 15 feet back from it. His eyes were closed.  He was very still.

There was a great deal I didn’t understand, but I would like to know more. I felt I didn’t want to go back to the temple unless I did know more. I am interested in how people worship.

When I got home I found a book on Hinduism. I think I would have to read many books and talk to many people before I began to understand  Hinduism.