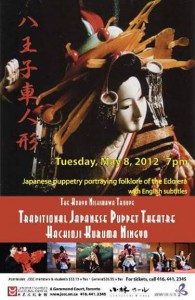 Even though it was outside our usual free or nearly free guidelines, I decided to write about this very important opportunity in Toronto.

In late 19th century Japan, the Koryu family created a new form of puppetry. Today, the 5th generation of Koryu puppeteers entertains and informs the world about this intriguing art.

Nishikawa Koryu V did not disappoint those of us who were fortunate to see his performance.

The Japanese-Canadian Cultural Centre’s Kobayashi Hall was filled to capacity as we sat entranced. One after another puppet glided smoothly from one position to another. The puppeteer was able to move eyebrows, mouths, delicate fingers and wrists. The changes of expression in seconds was astonishing.

Nishikawa Koryu V performed scenes from plays. In between scene changes, he talked about the musician who was using a traditional shamisen, which is like a very sophisticated guitar. He spoke of the Gidayu or chanter. That musician had a deep, specialized voice similar to what I’ve heard in Noh and Kabuki performances. Nishikawa said that this is accomplished by wrapping a very thick band around the singer’s diaphragm that forces the voice to drop. Surtitles in English helped us understand the stories.

The puppeteer sat on a very small box with three wheels under it. The wheels made it super easy to move around the stage in all directions. He manipulated the puppets smoothly in many directions with sticks from their backs.

Nishikawa explained about the loud stomping in the performance. Apparently in Bunraku, the older style of puppeteering, the puppets have to be held above the floor. They are thus not able to make a sound with their feet. It is believed that the stomping noise cleanses the theatre and brings in good fortune to the performers and audience. It also showed off the new Koryu technique.

I was sitting beside a Caucasian couple who had lived for years in Japan. After they left Japan, a friend there had told them that if Nishikawa Koryu V ever came to Canada they must be sure to see him. I certainly am glad that I did.