268. Families with Children from China 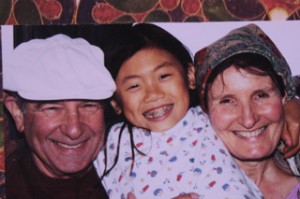 Over 10 years ago, I accompanied then 8-year old Mei Li and her adoptive parents back to China. We went to the tree under which the authorities had found her. We visited the welfare organization that had cared for her and other abandoned children, mainly girls. We saw other babies waiting to be adopted.

On that trip, the American couple who had adopted Mei Li encouraged her to write a note in Chinese. She was taking Chinese lessons then. With the help of a local social worker, she wrote to her “first” family that she was well and happy in the U.S. They tied the note, along with her baby picture, onto the tree. They hoped someone would tell her birth mother that she had done the right thing by giving her up.

It was a memorable, heart-wrenching trip on which I learned about the organization Families with Children from China. The Chinese ask adoptive parents to teach Chinese culture to their China-born children. Mei Li today not only speaks fluent Mandarin but she has been back to China on school trips several times since our journey together. One summer she lived with a Chinese family and “got a taste of being a Chinese daughter, and helped in a daycare place for orphans,” wrote Ginny Stearns, her adoptive mother this week.  On the other hand, Mei Li “ loves art, dance (mainly Afro-Cuban, West African and Capoiera)…” Mei Li just finished her freshman year at a U.S. college.

Mei Li is not the only such child who has re-visited China. I get the feeling that families like hers have become a sub-culture. They get together with other adoptive families for a meal during the Chinese New Year’s and Moon Festivals. The parents also learn about Chinese culture. Many take part in annual picnics, culture camps, mah-jong lessons, tee-shirts, etc. Take a look at its web-site: www.fcctoronto.org

This Sunday, May 27 at 2pm, Cindy Boates, president of the Toronto Chapter of Families with Children from China will speak  at the Annual General Meeting of the Toronto Canada-China Friendship Association. She has two adopted daughters.

She will be at the Fairview Library, 4th floor, 35 Fairview Mall Drive. It’s at Sheppard West and Don Mills and it’s free.