Jamila Kyari of Harbourfront’s Media Relations sent us this story about its innovative weekend festival: 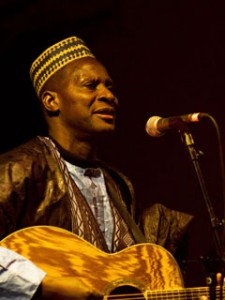 One of the festival’s highlights is Masters of Mali featuring Sidi Touré from Gao, Mali. As part of exploring various multicultural sounds and music genres produced by string instruments, the festival is testing the traditional ideas of what people perceive “classical” to be.

Born to a family descended from royalty, Touré’s family greatly disapproved of his singing – his older brother even broke his homemade guitar in protest. Tourés were sung about and sung to but until a little boy broke the rules, Tourés did not sing. All of this led to Sidi’s struggle between his passion for music and meeting the expectations of family and society. He may have made his first guitar from a wooden writing slate as a child but he eventually went on to become the youngest member of Gao’s regional orchestra, Songhai Stars in 1976. This orchestra is now signed to the Chicago-based Thrill Jockey Records. His first North American release came out in 2011 and another followed earlier this year: http://thrilljockey.com/thrill/Sidi-Tour/Ko-ma

Sidi now balances his singing with artistic creativity to create music that effects change. He is widely known across Mali and around the world for his style, a blend of African traditional music inspired by religion and culture but also very informed by Western blues and rock.