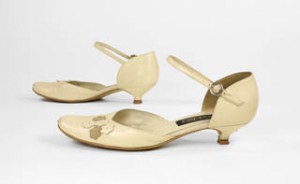 The Bata Shoe Museum has a new exhibition about the special shoes of 12 immigrant women from countries like the Ukraine, Turkey and Japan. Each woman has a story to tell and the exhibit is free because it’s on-line.

An Afghan woman on a tour of the United States writes about abandoning a beloved pair of shoes as she escapes and seeks asylum. A Turkish woman wears her green loafers to paint the walls in her new house in Toronto. She had bought them with her mother in Istanbul and worn them in a park with her niece there. They comforted her on her flight to Canada and now she accidentally drips paint on them.