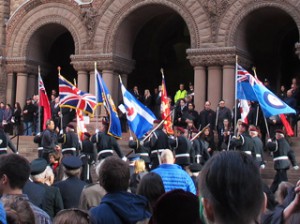 I grew up in Brockville, an Eastern Ontario town founded by United Empire Loyalists. Yesterday’s Remembrance Day Ceremony at Old City Hall brought tears to my eyes. They were not just for the lives of young people ended abruptly during past wars. I also felt nostalgia for the British past I experienced in my childhood.

Canada as you know, remained a colony of Britain until 1931 but that country still kept control of our military and foreign relations. Full independence was not achieved until 1982.

The military does not dismiss its history. Canadian military flags used until 1965 and the British Union Jack were prominent in the parade. Scottish bagpipes whined; a bugle played The Last Post. The hymns I had heard in those previous Remembrance Day ceremonies were sung: Oh God, Our Help in Ages Past and Eternal Father. A band played Onward Christian Soldiers though this title wasn’t on the printed program. I recognized old military helmets and campaign ribbons. Two young people recited the poem In Flanders Field. I can still recite this poem myself.

The ceremony, which was attended by at least a thousand people, even ended with the playing of the British national anthem God Save the Queen. 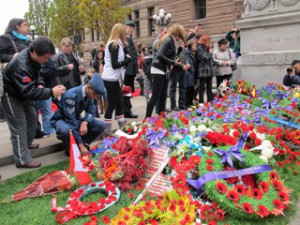 New to me however was the fly past by the Canadian Warplane Heritage Museum and the Canadian Harvard Aircraft Association as the clock bell at Old City Hall rang eleven times. This was the hour the armistice that ended World War One came into effect in 1918. WWI was supposed to be the war that ends all wars – but alas, it didn’t.

Mayor Rob Ford spoke of the occasion slowly and reverently. Organizations laid at least fifty wreaths at the base of Toronto’s cenotaph. Most of them were identical Then individual citizens added their own poppies to the wreaths and the Tomb of the Unknown Soldier.

A woman beside me was carrying a picture of a soldier close to her heart. I guessed it was her son. My heart went out to her.