What do you do if you get invited to a Bar Mitzvah? My invitation came because I’m on the mailing list of Congregation Shir Libeynu into whose welcoming arms I have frequently found myself. I didn’t know the family nor had I been to a Bar Mitzvah before. I was a little worried at first: should I take a present, and if so, what? What should I wear? Will I feel out of place with Doran’s friends and relatives? What language will it be in? And with photography forbidden during the sacred service, do I have to take notes? 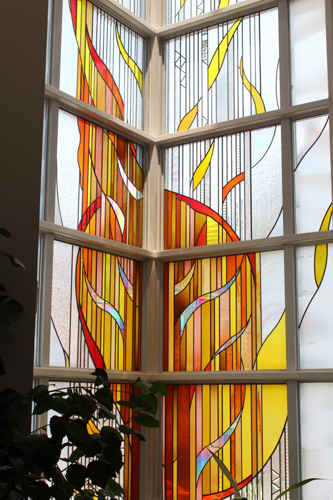 I needn’t have worried. Fourteen-year old Doran’s Bar Mitzvah was in a Unitarian building with its beautiful non-denominational stained glass window in front. I felt quite at home there. Shir Libeynu is a relatively new Jewish congregation that uses this and the Miles Nadal JCC for its services.

When I walked in the door, a member of the Congregation gave me a hug. Eden’s smiling daughter Zohar was passing out leaflets. Eden is on Shir Libeynu’s Board of Directors. Her congregation was hosting its first Bar Mitzvah.

I introduced myself to Arlene, Doran’s mother. She said she was glad I came. She was busy with at least a hundred guests so I sat down beside two of them. The elderly couple told me what to expect. Volunteers passed out a booklet compiled by the family. It included prayers and readings in English and Hebrew as well as pictures of Doran as an infant and young child. Doran’s parents had welcoming messages and explanations of their own faith. They mentioned the tallit, the prayer shawl to be used by their son on his first reading as a man of the Torah, the holy scriptures. His maternal grandfather had used that tallit in his own Bar Mitzvah in Egypt 70 years ago.

I loved the generational and family connections. Through the booklet, I was getting to know the family. 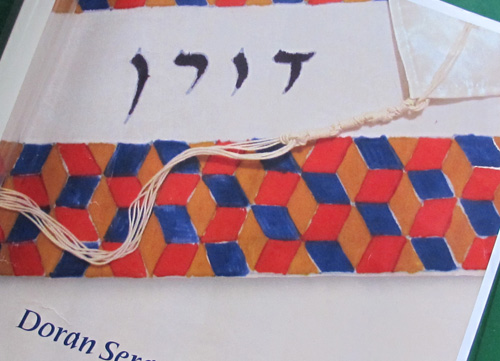 As the service progressed, I knew what was going on. It started like Shir Libeynu’s regular morning service. Then Doran’s parents, grandparents, cousins, aunts, uncles, and friends read passages, like “the Shabbat is a time to turn to the mystery of creation.” It was so profound.

Then Liturgical Leader Aviva Goldberg opened the doors of the Aron Kodesh, the holy ark, and removed a huge scroll. This was the Torah, the first five books of the Tanakh, the teachings given by God to Moses. Doran chanted a portion in Hebrew in the same sing-song way the cantor did. He had his grandfather’s prayer shawl on his shoulders. He sang confidently and I was moved to tears by the importance of the occasion for him. Reading the Torah is one of the main responsibilities of Jewish adulthood.

The audience applauded Doran’s first reading. Later, Eden said that applause in a synagogue is not traditional. The historical customs and the close involvement of family and friends were very meaningful.

Doran’s inaugural reading done, the congregation “showered him with sweetness” in the form of candy that had been distributed to us earlier. Children ran to pick up the sweets. His parents and grandparents added good wishes – “… may you be fearless and tender…may you know the comradeship of good friends and the meaning of generosity and compassion, the love of many and the love of one above all others.”

Doran thanked God and his parents. More prayers included petitions for the well-being of all members of the human family. Doran’s father Marc played the guitar and sang a song he wrote about his son. “…Then that little person/He starts growing up into a man./Not so fast my baby,/ I still want to hold you by the hand.” More applause. 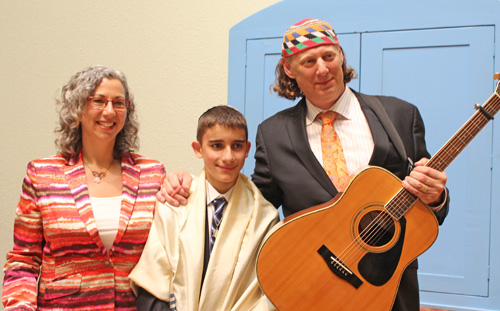 Afterwards. I learned that the procedure was basically the same as Doran’s for Bar and Bat Mitzvahs for different groups of Jews. Bat Mitzvahs are for girls. Zohar was looking forward to hers in two years. 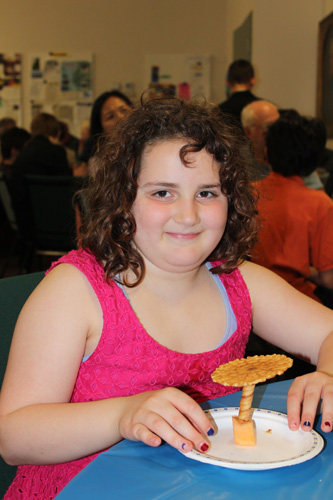 Doran’s grandparents pointed out that differences in Jewish customs existed among its various branches; for example, some Jews would not use a camera or play a guitar in a place of worship on the Sabbath. Some groups would not have a Bat Mitzvah for girls. In an Orthodox congregation, men and women would sit separately but Shir Libeynu is a liberal and egalitarian congregation and there is no such division. 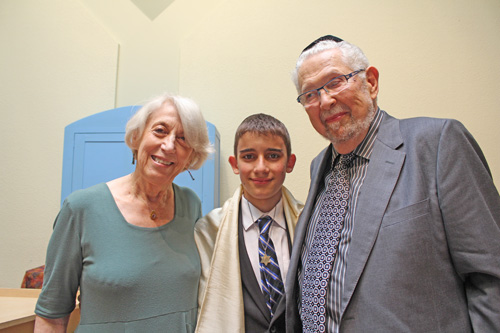 As for dress at the affair, many men but not all wore suits with kippahs on their heads. The women were dressed up a bit, a few also with skull caps. I didn’t notice any jeans or sportswear.

Eden explained about gifts. Eighteen is a special number among Jews. It is the numerical equivalent of the Hebrew word chai which means life. Monetary gifts in multiples of 18 are particularly appropriate. Family and close friends might give something they know the Bar Mitzvah boy wanted like gift cards or books.

But then, as Doran’s grandmother explained, you ask three Jews, and you get five opinions. If you get invited to a Bar or Bat Mitzvah, it might not be exactly the same as this one. I do hope however that my experience prepares you to enjoy such an event.

One thing all congregations agree on is food. Every Bar Mitzvah offers a lot of it and Doran’s was no different. Theirs too was wonderful. 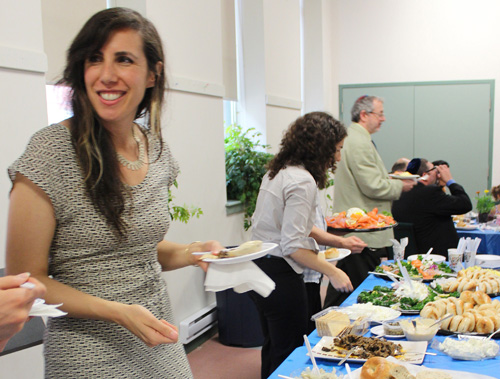