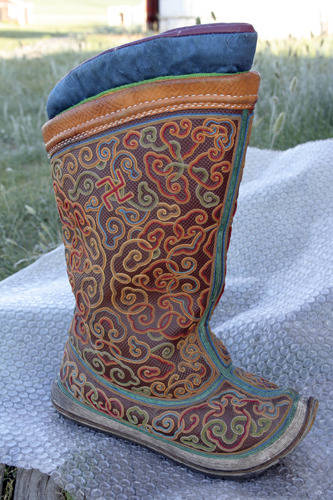 Royal boot about to be packed while still in Mongolia. Copyright ©2013 Ruth Lor Malloy.

What countries are not part of Multicultural Toronto? If you mention Mongolia, let me tell you about some very special artifacts from Mongolia now on display in our Bata Shoe Museum. These are especially close to my heart because I brought them back myself in 2006.

In one of my previous incarnations, I travelled a lot around Mongolia, Tibet, China and Myanmar looking for hand-made artifacts. I was especially interested in embroidery and footwear for museums in Canada. It was a great way to travel. The thrill of the chase was more fun than eating the spoils.

I had seen these boots in an Ulaan Baator antique store in 2005. They were obviously very special, but the owner refused to sell only them. She said they belonged to the former “queen” of Mongolia, Dondogdulcam whose husband was the Bogd Khaan VIII. He ruled the country from 1911 to 1924. She died in 1925. He was the last ruler of Mongolia before a revolution brought in a communist government.

The store owner wanted US$65,000 for a hat, fancy antique robes, and the boots. Only the boots belonged to Dondogdulcam. The rest were valuable, yes, but I only wanted the boots. They were so unique and finely worked, and boots are very important in the country. I reluctantly left the store empty handed.

I went back to Mongolia the following year. I had fallen in love with the country, its fence-free landscapes, its horses, and huge skies. I went back to see its annual national games, the Nadaam Festival. I also returned to the same antique store. No one had bought the boots, but this time the owner was willing to sell only the boots. Business had not been good.

The price was in the range that Sonja Bata of the Bata Shoe Museum wanted to pay. The owner said she could provide a certificate of authenticity and permission to take these national treasures out of the country. The certificate came from a professor at one of Ulaan Baator’s universities. I looked through books related to the former royal palace, now a museum. Similar boots were there. Of course I hesitated. It was a weekend and I couldn’t reach Mrs. Bata for approval. My travelling companions urged me to buy them however, but I had left my credit cards at our hotel. The store was about to close, but friend Joan Ahrens, who did have her credit card, trusted me enough. She paid. She is still a good friend!

I wasn’t sure I could take them out of the country until I passed Mongolian passport control at the international airport without incident. It seems that after the revolution in 1924, the palace was sacked, its contents stolen. Mongolia has not asked for a return for its own museums. 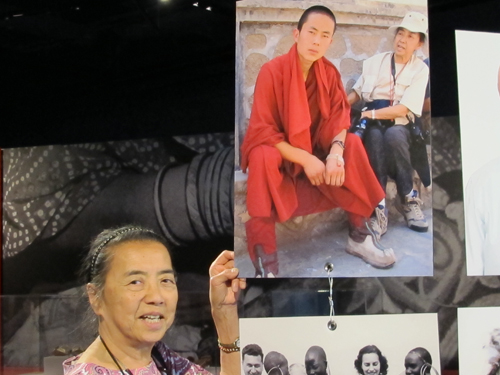 Ruth and picture of herself with monk whose boots she brought in Gansu, China.

The current exhibit called Collected in the Field: Shoemaking Traditions from around the World, also displays Tibetan boots I collected in Tibet. I once spent 27 days travelling from Lhasa to the western end of Tibet and back to Lhasa via Everest Base Camp. We visited every monastery along the way (except one). We slept outside of the cities in sub-standard hostels and camped in tents. On that trip monks and nuns were happy to sell me their hand-made footwear because they preferred the factory-made variety.

On another trip to the monasteries in the Tibetan area of Gansu province in China, near the birthplace of the current Dalai Lama, we found boots so rare that my Tibetan friends in Toronto don’t recognize them as Tibetan.

Some of these rare Tibetan boots are also in the current exhibition as is the story of how Mrs. Bata started the museum. In an adjacent gallery is an exhibition of special Native North American Footwear  also well worth seeing, as is the rest of the museum.

The admission fee ranges from $5 to $14 but every Thursday evening between 5 and 8 pm, it’s Pay-what-you-can, with a suggested donation of $5.

And it’s not only the footwear. I’ve met Mongolian people who are living in multicultural Toronto.

Ruth in the Museum’s vault with some of “her” Tibetan boots in 2005. Copyright ©2013 Ruth Lor Malloy

This blog welcomes guest bloggers who can tell us about events and customs that we can all share in Toronto diverse communities. Please email: ruthlormalloy@gmail.com.