Ruth writes: Where is Wiphala? When I read that the “Wiphala flag” was being raised at Toronto City Hall earlier this month, I wondered where that country was. The Web revealed that Wiphala means “flag” in Aymara, the language of the First Nations people in Bolivia. Wiphala is also a symbol representing First Nations people of other Andean countries as well: Peru, Ecuador, Northern Argentina, Chile and Southern Colombia. 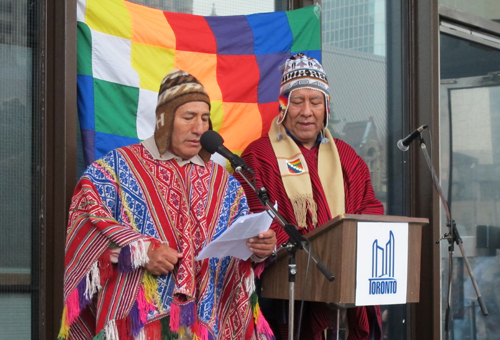 The event wasn’t new to Toronto. “We’ve had this ceremony for 12 years,” said Mae Maracle of the City Manager’s Office, who was among the first present. It was raining hard and the program started late. Earlier, I had phoned 311 to see if the event was still going on. Alas, no one there knew.

I took a chance and went anyway. I found Marco Guzman, Jesus Leon, a handful of other people, and about 50 chairs under a canopy on the podium roof. Guzman was very friendly and offered that he was an Aymara who had been born and brought up on the shores of Lake Titicaca in Bolivia.

Bolivia is the only country of the six where the Wiphala is recognized as an official flag too, Guzman said.

The flag consists of 49 squares in seven horizontal lines. Guzman said the colours represent the diversity of First Nations people. The rainbow colours are like those in the Gay Pride flag, plus white, he said. Each colour represents a country. Each square represents something like the four directions or four medicines. The design is over 1000 years old.

Gay Pride, which also flies a flag each year at Toronto City Hall, inspired the Andean community to ask then Mayor Lastman, to fly the Wiphala. The Gay Pride flag does not represent one country either. The Wiphala is a symbol of “resistance to oppression,” said Jesus Leon, of Peru’s Quechua First Nation. He stated that the indigenous people are still here, keeping the traditions and culture of the Andes. 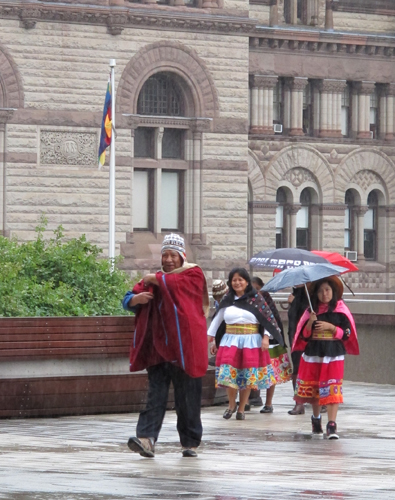 Guzman led a small group of brave souls to the flag pole where they raised the Wiphala in the rain. I could hear a pan flute playing during the ceremony. The tune was “Condor Pasa,” the group’s anthem.

Then Luis Alberto performed a tinkus, a dance from Northern Potosi, Bolivia. Although he was wearing what looked like a militaryuniform, I found him surprisingly graceful. 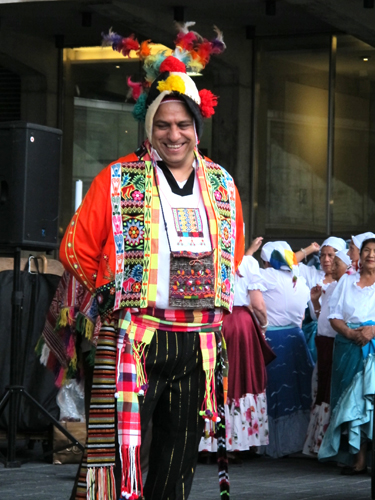 The show included Chinese dancers, a nice multicultural touch. “The organizers of the Chinese dance group indicated that they wanted to show their solidarity with the indigenous peoples of the South,” said Guzman. Bolivian musicians “New Dawn” performed on pan flutes, guitars and drums. 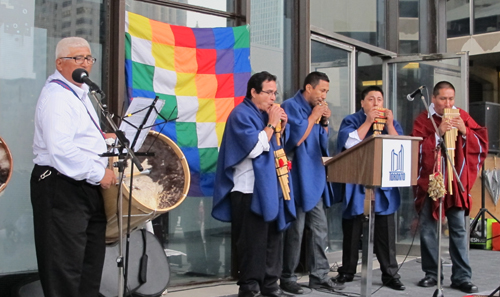 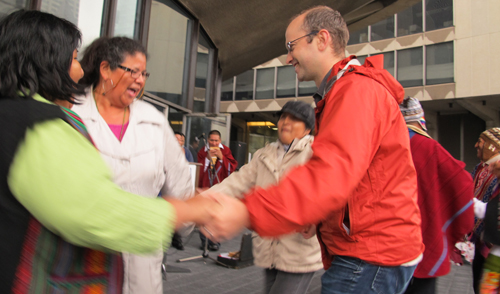 I found Guzman very interesting. He will be going to Bolivia soon to receive government honours for raising money here to help schools there.  He is executive director of the Frontiers Foundation, a non-profit organization that works with aboriginal communities to provide affordable housing and improvements in education innorthern Canada and abroad.

The event was organized by the Andean Council of First Nations (CANO in Spanish) in Toronto. I still had questions and I emailed Jesus Leon.

“ Hi Ruth thank you for your interest… In regards to your questions I have lived in Toronto since 1989 so I have been here a long time… In regards to the number of Andean First Nations residents in Canada, its hard to give you an exact number for many reasons. Firstly because there is no census data to refer to. Secondly because in our home countries we do not have status as First Nations or Native Citizens especially in my country of Peru. I can tell you that in the Andes there are still about 20 million Quechua speakers, and a smaller number of Aymara speakers in Bolivia and Peru. In Canada I would estimate that we number in the low thousands though many will not identify themselves as such because of prejudice from our Hispanic communities. That is one of the reasons why CANO was created to help such people feel proud of their heritage and to allow them to clearly identify themselves as First Nation members of the Andes. We have been successful in uniting such people from many countries and although our official  membership is small, we have had events that gathered hundreds of people with Andean First Nations backgrounds. We strive to continue with our work and to encourage more people to embrace their true identity and hopefully one day our home countries will grant us the status we should have. A good example would be Bolivia where the process for this has began under president Evo Morales and hopefully we will see the same in more Andean nations.”