During my two trips to India, I spent a couple of weeks in the state of Kerala in its southwest. I was anxious to visit a Mar Thoma church. It was said to be unique, having developed separately from both Rome and Constantinople. It had a distinctive history. 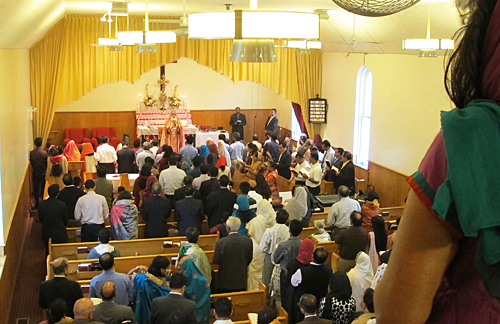 It wasn’t until last weekend in Toronto, yes in Toronto, that I finally experienced a service in that church.

This was the church founded by St. Thomas, one of the apostles of Jesus Christ who tradition says came personally to Kerala to spread the gospel of Jesus Christ almost 2000 years ago. Aren’t you curious about customs that have survived for thousands of years too?

The 2 1/2 hour service was entirely in Malayalam, the language of Kerala, except for the occasional warning in English that “This is very important.” Then Vicar John Panicker would switch back to Malayalam, a cliff-hanger indeed. 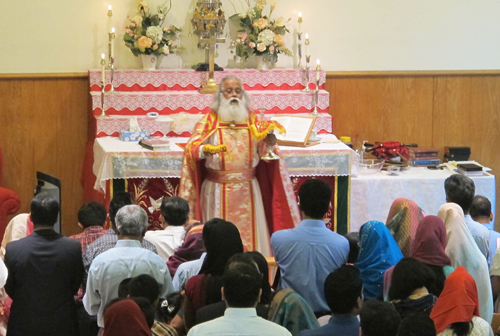 It seems that the GTA has two congregations – one in Milton and one in Markham. I arrived late for the 10am service on Sunday in Markham. The ground floor pews were full. Up in the balcony, I found room to stand. The seats were all occupied. Then a friendly lady in a saree offered me a seat, and brought a chair up from downstairs for herself. I was impressed by her thoughtfulness.

She handed me a copy of a book that outlined the service in English, Malayalam, and what I thought to be Malayalam in the western alphabet. The book made it easy to understand what was going on. Every so often, people would cross themselves.That also was easily understood. 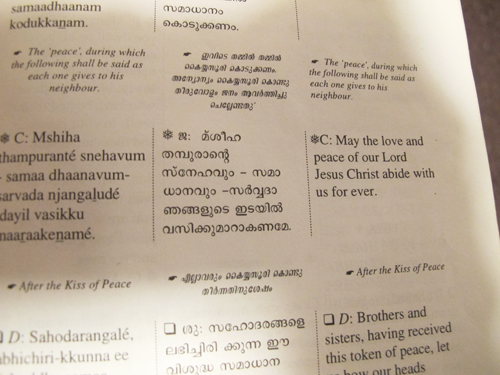 I’m not about to discuss the theology or history except that the church seems to have a greater tie to Constantinople and to Rome than I expected. I must say I was favourably impressed by the music. Some of the hymns sounded much like the Jewish music I had heard in Klezmer festivals. Was it Middle Eastern influence? Some of music was very pleasantly lyrical. I could easily hum along with the choir. I did recognize hymns like Nearer My God to Thee. The choir was very good. 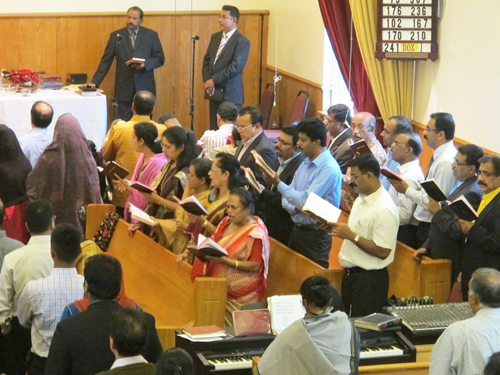 I do want to say that this was the friendliest church I’ve ever been in. The lady who offered the chair said I could take pictures. Many of the women wore sarees. After the Eucharist, several people came and welcomed me. They suggested I return next Sunday when the service would be in English. For answers to my many questions, they referred me to their priest.

Dr. Panicker seemed delighted to meet me, especially because of my Biblically-inspired name. Did I know that Ruth was the grandmother of Jesus? He said his congregation had 200 families. He urged me to join the parishioners who at that point were eating chicken curry and rice pancakes. Alas, I had to hurry off to downtown Toronto to join my own family for lunch. But I left feeling good about the hospitality and eager to go back and learn more about our similarities. 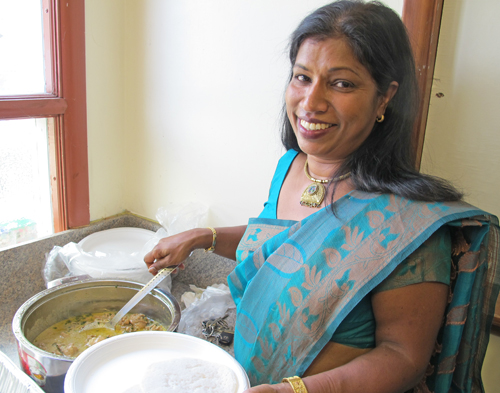 The Canadian Mar Thoma Church Toronto is at 313 Main St. North, Markham, ON, L3P 1Z2. Its website is: http://www.canadianmarthomachurch.com/

Please share your experiences in multicultural Toronto with us. Write to us at: ruthlormalloy@gmail.com. Ruth.