Except for the snow shovel, it was like being back in Laos. I slipped off my shoes outside the red door of the temple with its lovely gold apsara angel. I entered just as a circle of people were carrying elaborate silver bowls of food and fruit around the hall. They were filling up other bowls one piece at a time with offerings to be blessed, they said. 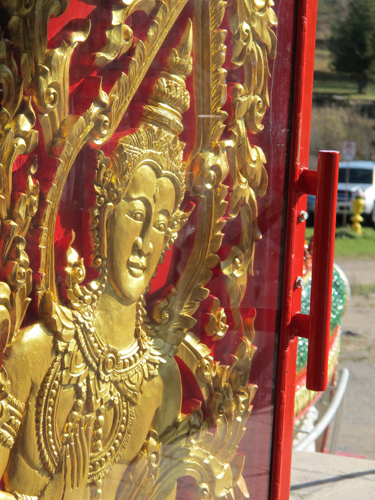 In front of the room, crowded with people sitting on the floor, were nine robed monks, praying and eating from circular woven trays of food. They were under the gaze of several Buddhas, the largest with his head haloed with an elaborate light. One monk was speaking on a microphone. 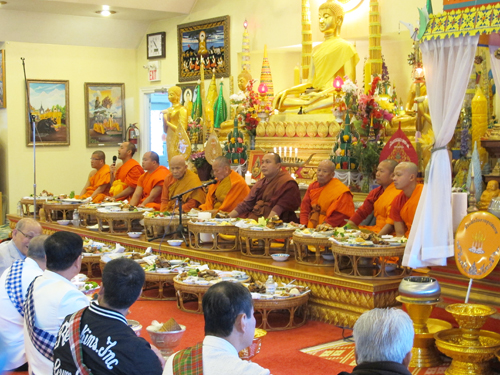 I got permission to take pictures. In the centre of the room was a covered altar filled with gifts for the monks, like toilet paper, blankets, and robes. It was decorated with crocodiles, turtles, and an increasing number of U.S. and Canadian banknotes. A nearby tree was full of banknotes too. 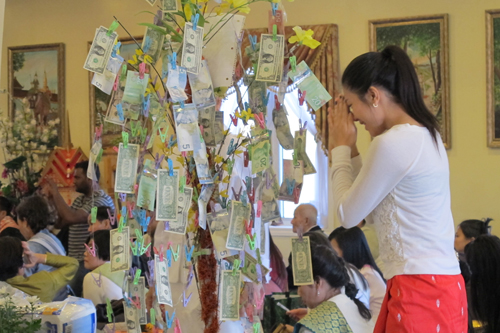 At one end of the altar, a woman burned candles and incense while another added some money and prayed. Downstairs I found people eating rice, noodles, pineapple, and some delicious sauces. I couldn’t resist and joined them. 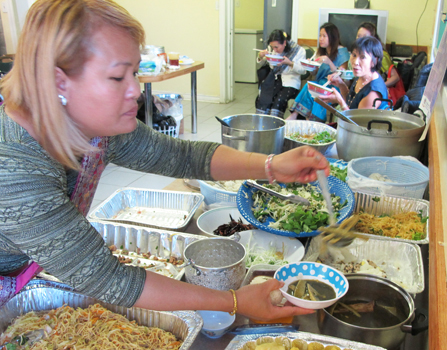 Back upstairs, I found the hall transformed. The circular tables were now surrounded by groups of families or friends. One of them invited me to join them and I found myself communicating in my limited Cantonese. They took my business card to an elder who put me on the temple’s mailing list. Obviously they were happy to have outsiders join their ceremonies. 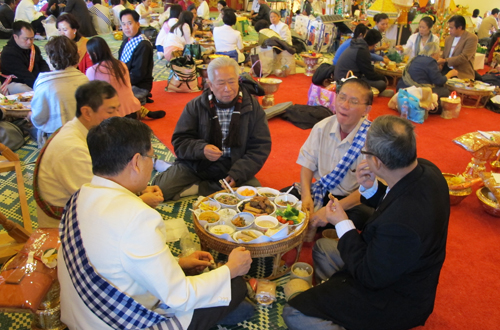 After eating, we all assembled outside. Monks and men carrying a broom, the snow shovel, and a Buddhist flag led the group clockwise three times in front of a smaller building in front. 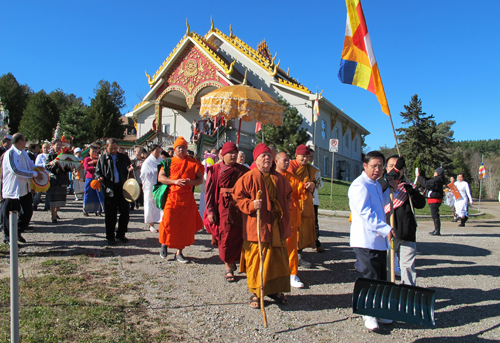 People carried the giant golden umbrella, flowers, food, monk’s robes, and the money tree. The worshipers shouted loudly and gleefully to the beat of gongs and drums. It was such a joyful sight that I forgot to ask the reason for the snow shovel and broom. Maybe the shovel was to show we were in Canada, a new design to be added to the temple’s logo. Most people I talked with spoke excellent English so they could have told me. Only three of us seemed to be outsiders.

It was 5 degrees C. but no snow was on the ground. You too can be in Laos if you go to festivals like this. This temple has another one this month. It is on November 17, during the new moon, the biggest national Buddhist holiday. It starts at 10am with the acceptance of the five precepts, followed by Takbat which is a procession of monks collecting food donations. It ends at 12pm with lunch for everyone. I do hope you can experience that lovely festival too. Caledon isn’t that far away.

For the address, see: www.torontomulticulturalcalendar.com . Please let me know if you remember to ask about the snow shovel. Ruth.