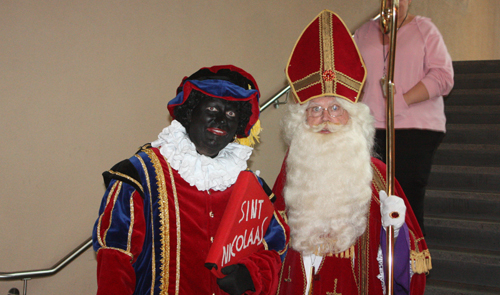 The Dutch are currently embroiled in a cultural controversy — what to do about their beloved Black Pete. Known as Zwarte Piet, Sinterklaas’s trusty helper has always – well since the 1800s – been there with his buddies on the eve of December 5 — helping to distribute presents to children who have been good during the year. Sinterklaas with his bushy white beard is the origin of North America’s Santa Claus. Sinterklaas is Dutch for St. Nicholas.

Black Pete’s face is traditionally painted black, his hair covered with a curly wig, and he has over-sized red lips. Sometimes the story goes that the black is soot from his job of sliding down chimneys to deliver presents. His traditional Moorish clothing implies something else.

A working group of the United Nations Human Rights Commission pointed out this November that Black Pete “perpetuates a negative stereotype of Africans and people of African descent.” (http://www.ohchr.org/EN/NewsEvents/Pages/DisplayNews.aspx?NewsID=14013&LangID=E )

The controversy was made even more pronounced when a Dutch newspaper De Telegraaf recently printed a remark that linked the death of Nelson Mandela, “which happened, of all things on Sinterklaas evening (with Zwarte Piet).” The newspaper has since apologized and deleted the story. (http://www.telegraph.co.uk/news/worldnews/nelson-mandela/10500735/Nelson-Mandela-Dutch-newspaper-apologises-for-Black-Pete-link.html .)

The Dutch seem to be divided about changes in the tradition. Many people want to continue with the fake black-faced helper out of Dutch nationalism and traditional fun. Some suggest that a white face with black smudges to indicate the chimney custom would be a good compromise. At least one person suggested that Sinterklaas should be black and his helpers white.

In Toronto last year, I photographed a black Black Pete appearing at a children’s party with Sinterklaas at the Bata Shoe Museum.

At the Lowe’s Christmas Market on December 5 this year, Sinterklaas did show up on his traditional white horse. A white Black Pete was following him and passing out gifts, someone quipped, “It was so cold last year, Zwarte Piet turned white.” 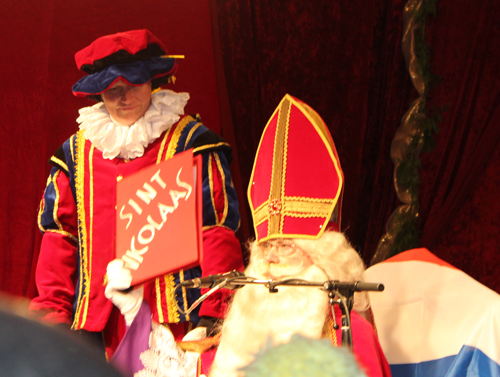 For those who want to follow the controversy, the New York Times had an article recently on Why the Dutch Love Black Peter:

The BBC had pictures of the arrival of Black Pete and Sinterklaas in Holland on the traditional ship “from Spain” with quotes from black Dutch residents. http://www.bbc.co.uk/news/world-europe-24979498

When I saw that article, I felt badly for the blacks interviewed as revelers shouted “Zwarte Piet” at them. I would feel equally uncomfortable if someone wearing a Manchu dynasty queue or even a cheong sam shouted “Chinese” at me. I am so pleased that Toronto’s Dutch Black Pete this year was white.

I think the fake black faces do perpetuate a master-servant or slave stereotype. I am glad we don’t have black-faced Al Jolsons around any more. I vote for the white face smudged realistically with black soot alternative. What about you? 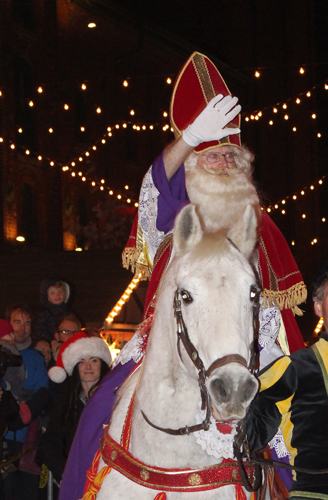