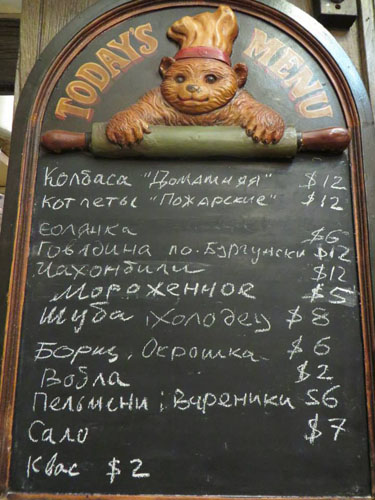 I was excited when I heard that daughter Linda had visited the South-Western Bathhouse in exotic Etobicoke. Although a bath at $30 costs more than the guidelines of this website, I want to include it because banyas are so traditionally Russian. This one turned out to be much more than a place to get clean. It was a place to get warm and to eat. Ruth.

My cousin Tania invited me. She had found it on the Internet. A Russian banya or sauna sounded like fun and she said the food was really good so cousin Ian and I joined her.

The “Russian-style Bathhouse and Tea Room” is in a strip mall in Etobicoke near Highway 427 and Dundas West. It is west of the Muddy Duck Tavern down a nondescript alley. We entered through a red door with a sign that said “Russian Bath House” and found ourselves in Russia.

A nice Russian lady greeted us. We bought traditional felt hats to keep our heads cool. We bought green oak leaves for $20 that had been cut in the spring and frozen. The leaves are used for beating each other to help increase blood circulation. Tania had been there before and knew what to do. 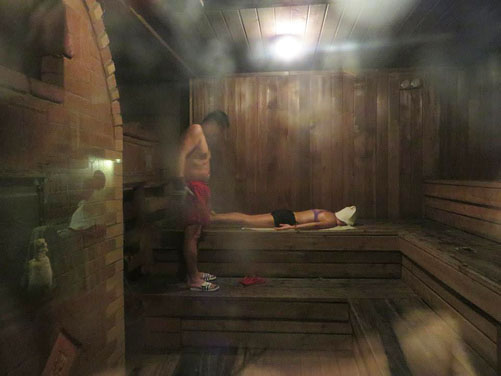 We went to the change room, got into our robes and swim suits and then went into the banya area. The owner showed us how to sprinkle the water on the coals. I lay down on a bench and Tania started by waving the defrosted leaves over my body. This was to push the heat down to me. Then she beat me but it didn’t hurt. A Siberian guy offered to beat Tania and he turned the heat up so high she hallucinated. She had to get out of there and I gave her a drink of water and she was okay. Many people spoke Russian. The Russian lady sold us a body scrub made from honey and salt for $3 which we used later in the steam room. 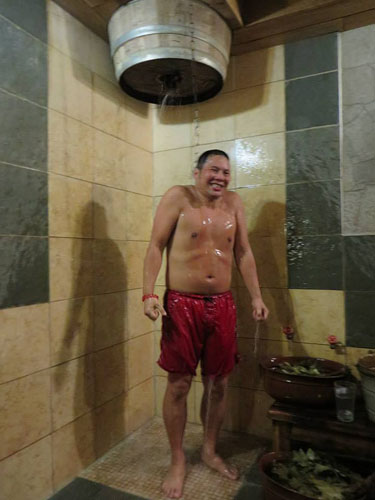 Cousin Ian grimaced as he cooled off under the cold shower. Ian is the developer of “Dragon Emperor’s Challenge” and allowed us to use this picture only on condition that we mention the hot link to his app:  https://itunes.apple.com/ca/app/dragon-emperors-challenge/id586129148?mt=8 . So there it is.

A man who claimed to be half-Finnish said “I don’t mean to be a back-seat beater but it’s normally done faster than that.” Tania thanked him for his advice and beat me faster and harder. It still didn’t hurt. Later when we were resting around the pool I saw a man with two bunches of oak leaves go into the sauna with his wife. We went to watch because he looked like he was experienced. He beat her back intensively from various position as if she were a drum. It was more vigorous than our efforts and very impressive.

We went to lunch in our robes, past the large tv lounge where half a dozen people were watching nature documentaries. We ordered sausage, herring with beet salad, and a chicken dish. They were delicious. The menu had a drink that was supposed to be good for your stomach, called kvass. It looked like cloudy weak tea and it tasted unpleasant. 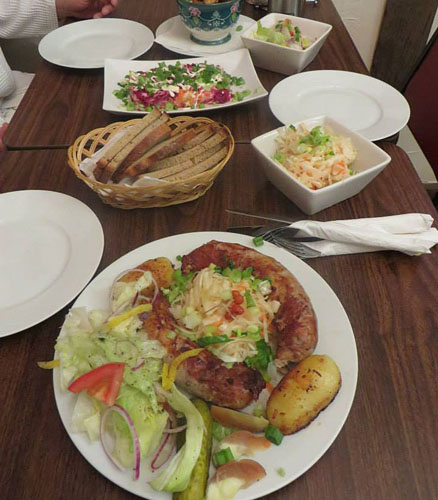 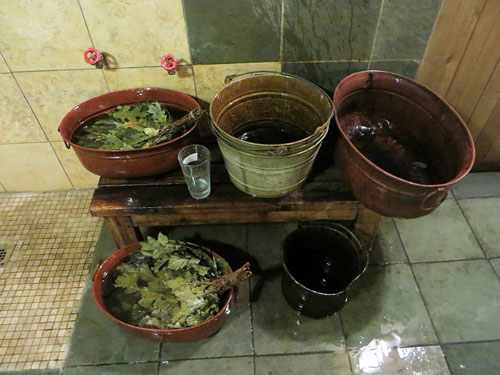 Has anyone found a Japanese bathhouse or Turkish bathhouse we can go to also?