459. Differences between Vietnamese and Chinese Culture.

We welcome a response to a comment by Tom T N Pham about our Blog on the Vietnamese Tet: https://www.torontomulticulturalcalendar.com/2014/01/21/449-images-of-tet-toronto-vietnamese-new-year-2014/ . Ruth. 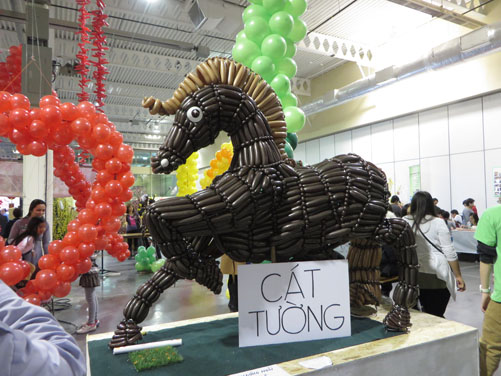 Year of the Horse but not the Rabbit. Copyright ©2014 Ruth Lor Malloy.

I feel that readers of your blog ought to understand the underlying reason for certain comments made on your blog. Besides people ought to be educated about ethnic conflicts that exist, since treating such conflicts as taboos will only prolong any feeling of antagonism.

I feel saddened about the response from Tom Pham that displays ethnic pride often shown by nationalistic Vietnamese when comparison is made or similarities mentioned with respect to Chinese.

You may be aware of the historical antagonism and conflicts between Vietnam and China. Throughout Vietnam history, China has been seen as a big bad northern neighbour with an unwholesome appetite for Vietnam, never to be trusted.

This historical sentiment transforms into a will for Vietnam to distant herself from China as far as possible; for example, the adoption of the Latin alphabet for writing.

In North American cities where there are significant Vietnamese populations, like Texas, California or Toronto, the equalling of Tet with Chinese New Year will ruffle the feathers of nationalistic Vietnamese. So the tribal-neutral term “Lunar New Year” is preferred, mainly by Vietnamese, and to a much lesser extent by Koreans. Japanese have a minimal celebration on that date.

Tet of course has a Chinese origin. No Vietnamese can deny that, however much they let the history between the two countries affect them. I as an ethnic Chinese-Canadian person can fully comprehend that. It’s a bit like how Canadians may resist cultural domination by the USA, except multiplying that by maybe 10 or more when it is between Vietnam and China due to the longer history.

As for differences between Tet and Chinese new year, a quick Google search should yield useful information. Vietnam occupies a different geographical area and would naturally evolve her own set of customs and traditions. One traditional remark about why Vietnam has the Cat in the zodiac is that the word Rabbit in some ancient Chinese sounded like cat in Vietnamese. A more plausible explanation is that “it’s a matter of national honour not to have copied China completely”, said Benoit de Treglobe, from the Research Institute on Contemporary Southeast Asia in Bangkok.

“This form of distinction in imitation can be found throughout Vietnamese culture,” he added (full article: http://newsinfo.inquirer.net/breakingnews/world/view/20110203-318234/How-the-Chinese-rabbit-became-a-cat-in-Vietnam).

Please send us corrections and opinions about any of our Blogs to “Respond to this post.” For longer items, write to ruthlormalloy@gmail.com .  We look forward to hearing about your experiences at Toronto’s diverse cultural festivals and events.  Ruth.