Ruth writes: I was curious because I didn’t know we had a Filipino neighbourhood in Toronto. Fortunately, Heritage Toronto organized a tour in St. James Town last weekend. This is the area of many high rise apartment buildings bounded by Sherbourne, Bloor, Parliament and Wellesley Streets. Guide Diana Marie Roldan, a volunteer,  told us about other areas too.

Diane Marie  was great and very well organized. She is an architect in Toronto who was born in the Philippines.  She even planned a couple of spots where we could sit to listen. We didn’t have to stand for almost two hours – as some tours force us to. 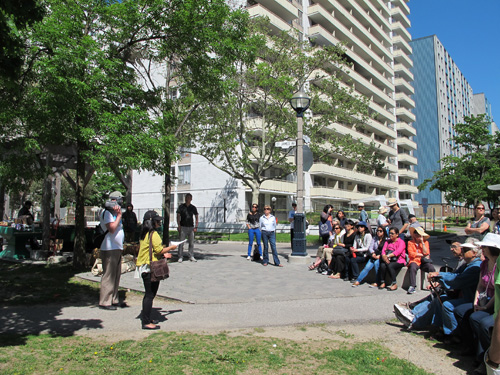 She started off teaching us “mahal kita” which is the name of a restaurant near our starting point at the Sherbourne subway station. It means “I love you” in Tagalog, the main language in the Philippines. Filipinos came to Canada in three waves starting in the 1960s, she said.  They were badly needed health care providers and chose to live in St. James Town because of its hospitals. 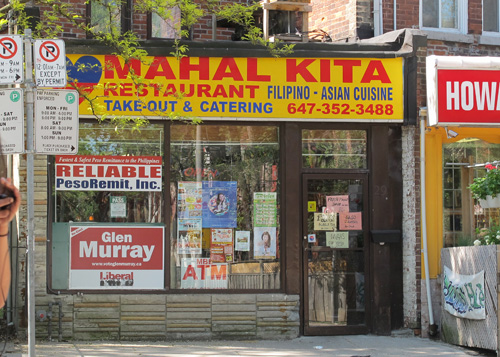 St. James Town is the largest high-rise community in Canada with about 25,000 people, she said. Filipinos started living there in the 1960s. In addition to describing the buildings – 19 high-rises of 14 to 32 stories – she told stories about the Filipinos who lived there: the “grandfather” who helped new arrivals, and the woman who sent money back to the Philippines regularly. Her family there built a tower in their village with the money. It was a structure that sheltered the whole village during the recent devastating typhoon, the only building that was left standing. 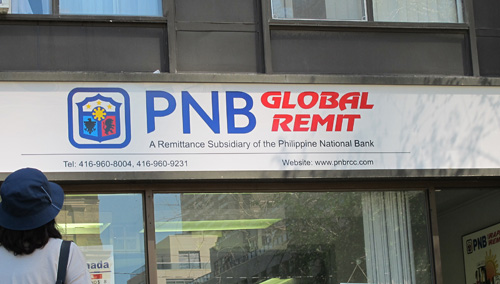 Diane Marie showed us the Philippine National Bank Global Remit set up to send earnings back to the Philippines. It has four branches in the GTA, in areas of large concentrations of Filipinos – Warden and Sheppard, Wilson and Bathurst, Dundas and Hurontario, as well as Sherbourne and Wellesley. Last year, Filipinos sent home over two billion dollars from Canada. 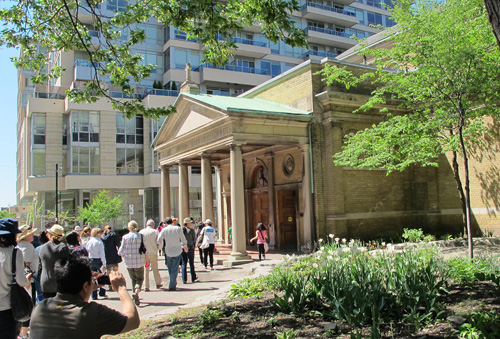 She took us to Our Lady of Lourdes Catholic Church, built in 1887, one of several Catholic churches where Filipinos worship. She told us about Filipina Juana Tejada who was to be deported after working here for three years because she developed terminal cancer. The Filipino community and others rallied to her aid and effected a law change.
The tour ended at the community centre and library in a park that was formerly the site of Wellesley Hospital. The visit reminded me of my own three years of living in the Philippines. I looked up the Web and read about a restaurant in St. James Town where you can order “balut”.  This is duck egg with a developing baby duck inside, a Filipino delicacy. I’m glad she didn’t tell us about that.

Toronto Heritage has other tours this summer, among them, June 7 of the Portuguese community and June 26 of Kensington Market. Its Immigration Stories will explore the area around Toronto City Hall on July 12, July 24, August 10, September 14, October 25. These are pleasant tours for learning about Toronto. See: http://heritagetoronto.org/wp-content/uploads/2014/04/HT_TourBrochureWEB.pdf?