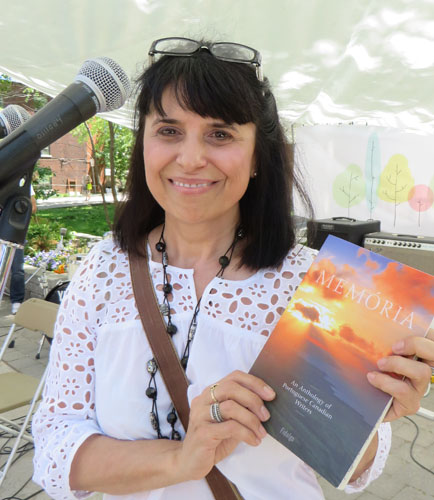 Ruth writes: I wanted to get a wider picture of our Portuguese community. I have been to its bull fights, its big wonderful annual parade, and its Easter processions. I have been to a “Proud to be Portuguese-Canadian” event. I have even spent a week in the Azores where my husband’s dentist is from. I honeymooned in Macau when it was still a Portuguese colony.

I once worked with Portuguese immigrants in Toronto. I wondered if any of my old students and dancing partners were still around. Fortunately, Heritage Toronto was offering a walking tour starting from Kensington Market, the area where I once lived and worked.

During Portuguese Heritage Week also, a Tribute to Luis de Camões & the Portuguese Walk of Fame Ceremony were due to take place. The Portuguese are special to me, but no more than any of the hundreds of other groups that make up our city. If you haven’t guessed by now, I am fascinated by every ethnic component of Toronto. So I went to that too. 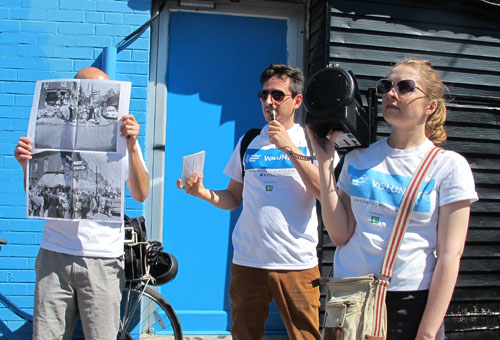 The walking  tour was well presented by members of the Portuguese Canadian History Project from the University of Toronto and York University. All our stops were in spots that were shaded from the hot sun – good thinking, guys. Members took turns explaining about the Portuguese stores and radio station in Kensington Market, Portuguese homes, St. Christopher House, political activism, etc. A summary is on its website: www.tinyurl.com/portuguesehistory. These university people were very well organized. I didn’t need to take notes. 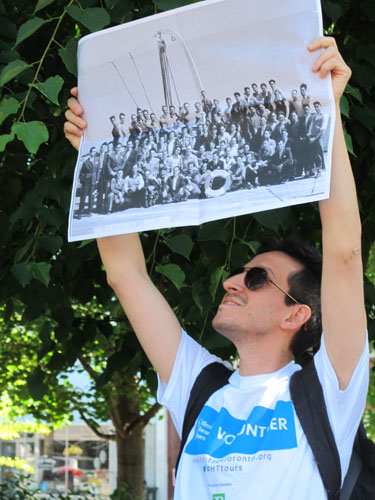 Our guides limited their history to the 1950s and 60s, a time when a mass migration of mainly Portuguese men arrived in Canada looking for better economic and political opportunities. Canada needed the labour. It was a good fit. The first group arrived in Halifax aboard the Saturnia on May 13, 1953. The women came later. As we walked westward, guides pointed out where Portuguese stores and homes used to be and held up pictures of the originals. Many more pictures are on its website. 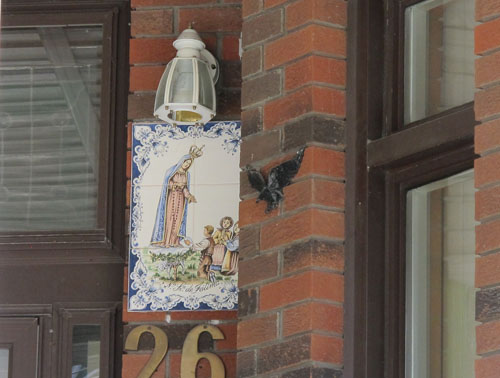 Some homes close to Kensington Market still had religious tiles of St. Anthony, Jesus, or St. Mary imbedded on their brick exteriors. The bulk of the community has since moved westward from there along Dundas Street West and out to the suburbs. 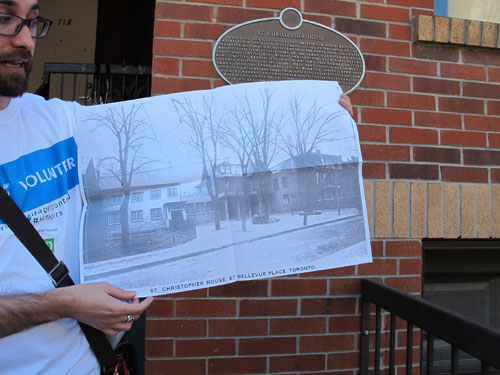 I was especially interested in St. Christopher House because I worked there organizing classes in the English language and Canadian social skills for Portuguese and Italian immigrants in 1955. This settlement house has now moved west also, but a plaque on the wall of a townhouse gave its history. I felt I was part of Portuguese-Canadian history. 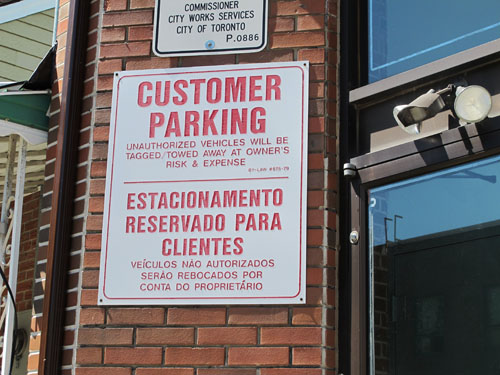 On Dundas, west of Bathurst, we could see the old deteriorating Portugese street signs, and the new ones. And a Portuguese bank. A sign outside a former Portuguese pharmacy still limited the parking of cars — in Portuguese.

The tour ended by Trinity Bellwoods Park where the Parade ends too. I continued walking west on Dundas to see the Dundas West Festival in this predominantly Portuguese area. We met poet Edith Baguinho who was looking for the stage where she was to read, and fortunately we had a brochure from the walking tour that could help her. 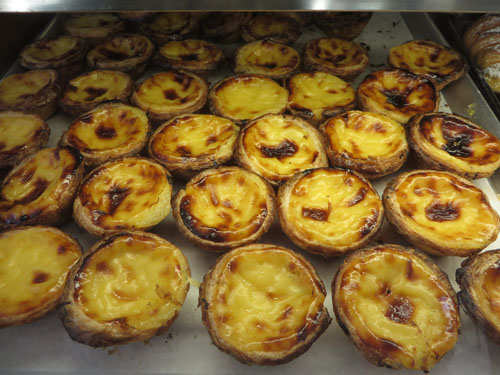 By that time, I had been on my feet for over two hours, and needed a rest. I couldn’t resist a custard tart or “pastéis de nata” at nearby Nova Era bakery. I first encountered these delicious tarts in Hong Kong and am convinced that the Cantonese got their inspiration for “dan tarts” or egg tarts, from the Portuguese through Macau. 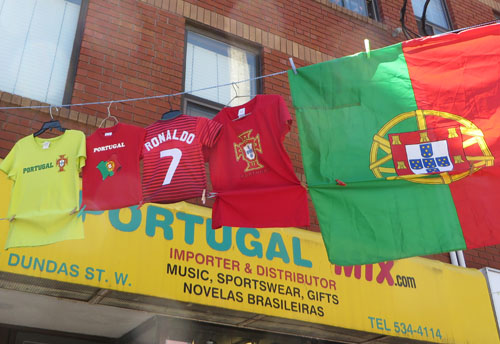 My eyes by then were focused on looking for things Portuguese and I found stores selling soccer shirts. I learned who Ronaldo 7 was. 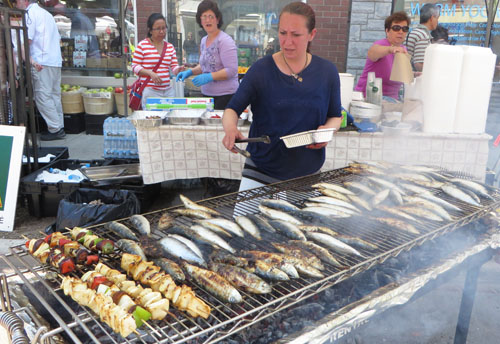 I tried unsuccessfully to remember any other festival where participants cook and sell tiny fish. 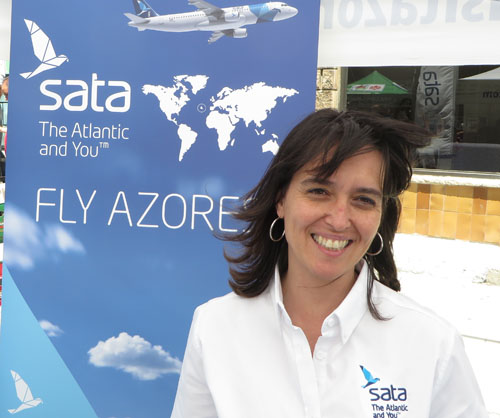 I found a representative of a Portuguese airline and one of several Portuguese-Canadian politicians. City Councillor Ana Bailão was the only one at a stall and she agreed to a photo. 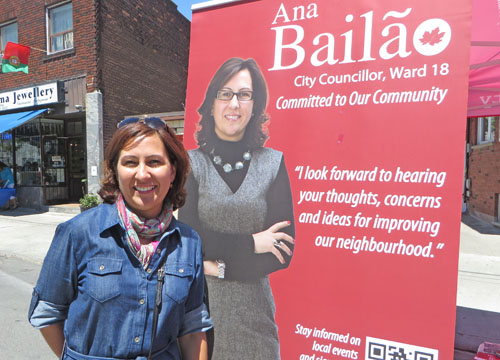 I was pleased to meet up with Edith Baguinho at her stage. She had just finished her presentation, but I stayed to listen to storyteller Emanuel Melo and his sad tale of a Portuguese grandmother left out of the activities of her Canadian family. The story could apply to any number of other cultural groups, alas. 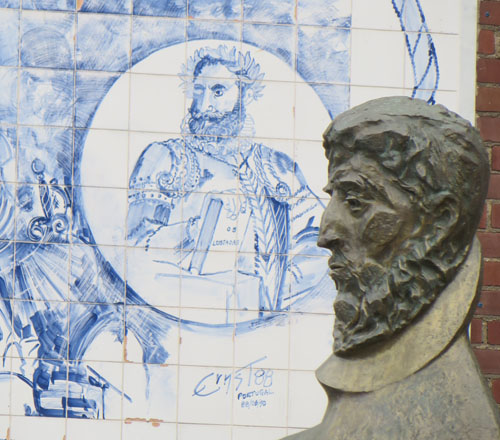 The next afternoon, I finally visited the attractive corner known as Luis de Camões Way at 722 College Street. A bust of the one-eyed Portuguese poet looked impressive against a blue and white tiled mural of his life. It has been there since 1982, a sign announced. Portugal’s national day is Luis de Camões birthday.
The nearby stars on the wall of the Portuguese Walk of Fame honoured three people last year: singer Nelly Furtado, and Michael Nobrega, former CEO of the Ontario Municipal Employees Retirement System. The third was Antonio Santos e Sousa, pioneer and community leader. Was this the Tony Sousa I remembered from St. Christopher House dances? 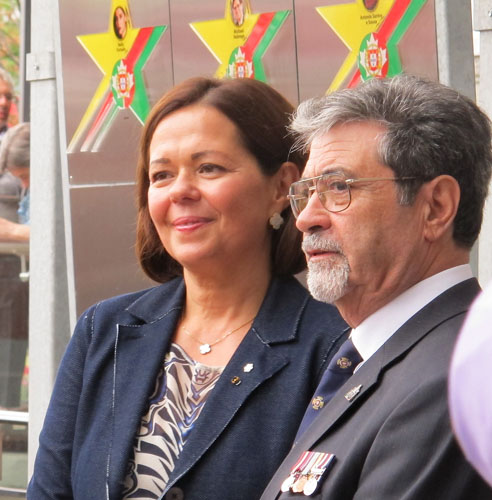 This year Canada’s first postman, Pedro da Silva from the 17th century, got a star. Stars were also awarded to war veteran and advocate Pedro Aires Simoes Correia and CAMH Foundation chair Ana Paula Lopes. Both are active in other philanthropic efforts as well. They were an impressive lot.

I asked three people  if they could recite any of Luis de Camões poetry. They were all Portuguese but none of them could, claiming they didn’t go to school for long.
The highlights of my two Portuguese immersion days as always was just meeting people like these, like the poet Edith Baguinho. At the Walk of Fame I met Rosa, wrapped in a Portuguese flag. She made me feel really welcomed in the predominantly Portuguese crowd. 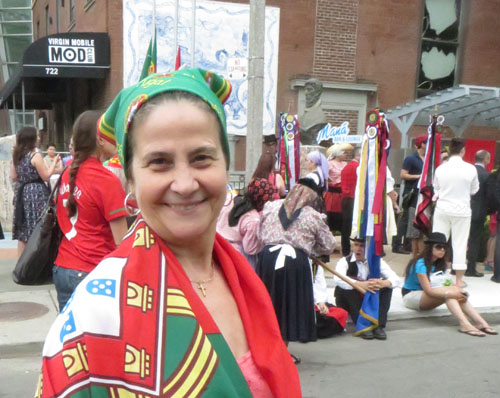 Rosa was from the island of Madeira, and was so friendly. She said the theme of the Portugal Day parade changed every year. She said Camões was known more for developing the Portuguese language than for his poetry. We laughed as she told me she worked in a factory and loved making socks after she arrived here.

Someone said that Antonio Sousa had arrived in Toronto in 1953.  The name sounded familiar but I didn’t have to opportunity to ask him. He was too busy with the ceremonies.

To complete my Portuguese experience, I have the Portuguese Pioneers Gallery at 960 St. Clair Avenue, another Portuguese museum on Atomic Avenue, and the Pioneers Monument in High Park on my list to see. These two days gave me a broad range of the Portuguese here, the rich and poor, the illiterate and the educated.

I left feeling there’s a lot more to see including folklore dances and pop singers at Downsview this coming weekend. But then June is also Italian Heritage Month and Aboriginal Culture Month. There are free tai chi lessons and piles of events I haven’t had time to add to www.torontomulticulturalcalendar.com . It’s summertime and the living is hectic. We in Toronto are blessed with an over-abundance of multicultural riches.

For our Blog about Proud to Be Portuguese: https://www.torontomulticulturalcalendar.com/2012/03/19/241-proud-to-be-portuguese-canadian-3