Ruth writes: The 16 or so Sainte Famille Choir members started out wearing conservative choir gowns. They looked solemn and sang beautifully. With a hand on a shoulder, they proudly performed the Haitian national anthem to appreciative applause. 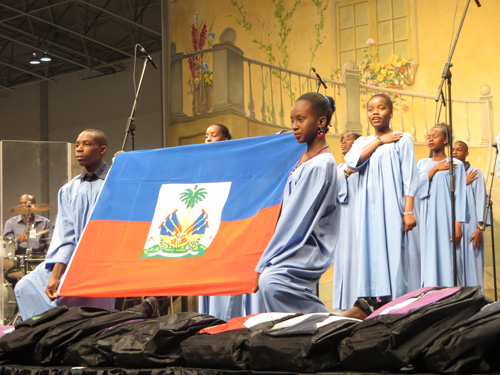 Then off came the gowns. Underneath were colourful tropical skirts and shirts. On came lively gestures and smiling faces. I didn’t expect 16 young people from a poor district of a poor country on their first trip abroad to be so self-assured. They were fun. 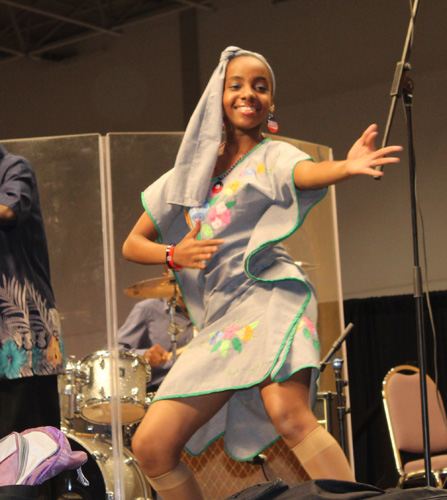 They seemed to be enjoying themselves too as they sang Haitian folk songs, at least one in English. They acted out folk tales. One young lady wiggled seductively as the choir teased a disagreeable pipe-smoking woman. I wish we had been told the story in advance.

This year’s International Stage at the 17-day Canadian National Exhibition is presenting two groups from abroad. On opening day I only had time to see one of these. The Saint Famille Choir will be performing again here and at the Stratford Festival.

The second group the Taimid Seanachal is on stage twice daily at 1:30 and 8pm. This Celtic group was recruited specifically for the Canadian tour in London, England. Three out of the four people sitting near me said the dancing was very  good. I look forward to seeing this newly-formed show along with some of the other culturally-diverse offerings this year. 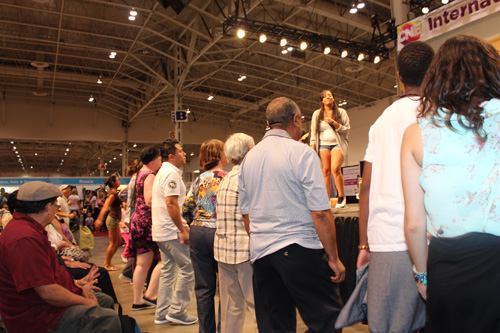 The other group on opening day was Just Friends, six musicians from the likes of the Barbados and Trinidad. The lead singer had a pleasant mellow voice. The calypso was lovely.
Just Friends interacted with the audience – and did a crowd-pleasing segment where they called for volunteers to learn some Caribbean dances.

The other 24 different performing groups and individuals who are appearing on CNE’s stage this year are mostly Toronto-based. Some like the athletic Ukrainian Kosaks, the Oriental Dancers,  Ijo Vudu Nigerian Dancers, and Mi Young Kim’s Korean Dancers have appeared on Toronto stages many times. They are worth seeing again. The same goes for Sakuramai who danced recently at Yonge-Dundas Square, and Carmen Romero, the passionate flamenco dancer who has been on the CNE stage before.

Judging by their amazing costumes in the website theex.com, I also want to see the Russians and the Armenians. But since each of these groups is appearing only once over a two-week period, it means I would have to go back to the Ex at least eight more times. I suspect that the CNE planned it that way. They also planned lots of chairs for people to rest between visits to the International Pavilion’s many vendors – fewer booths this year than last. 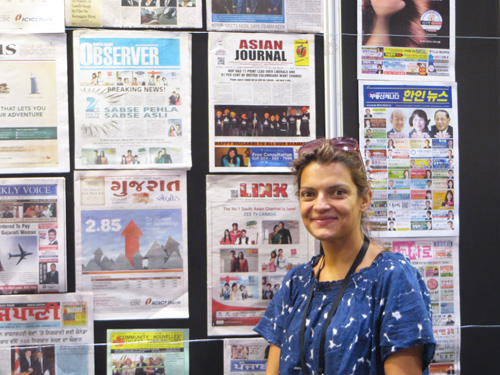 While you’re there, take a look at the annual Ethnic Press display. It’s easier to find this year as it’s within sight of the International Stage. As usual, it’s an indication of what multicultural Toronto is all about – newspapers in Chinese, Russian, Persian, Portuguese, English, etc. – almost all published in Toronto.

Tell us about your multicultural Toronto adventures. Write to us: ruthlormalloy@gmail.com.