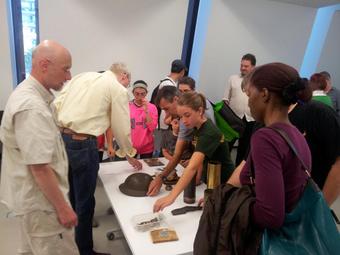 I am working with the Museums Unit of the City of Toronto on a project called Toronto’s Great War Attic. There are 230 plus self-defined ethnic/cultural groups in this city and so we feel that we have an unprecedented opportunity to commemorate the First World War by asking everyone where their families lived in 1914 and if they know how they were affected by the war, and if so, would they share their stories with us and any family heirlooms that have been passed down.

The way we are gathering information at this time is through a number of “pop-up” museum events at our historic site museums and on November 13 at the Columbus Centre and on November 28 at Cedarbrae Library… The full description is on our web site: www.toronto.ca/ww1.  I’ve also attached a photo to give you an idea of what a pop-up looks like—that is a combination of items from the City’s collections and from our participants with people sharing stories and talking about their heirlooms. Our next pop-ups are the afternoons of Saturday October 18 and Sunday October 19 at Colborne Lodge in High Park and Montgomery’s Inn near Islington Village.

Our partners from the History Department, York University complement our museum experts by offering their insights about the stories and the heirlooms that are brought to our events. With permission, videos of the stories and photos of the material will be posted on the Canadian Encyclopedia website under their Great War Theme of the My Canada map. Historica Canada owns and operates the Canadian Encyclopedia and  is another partner. We are also partnered with the Multicultural History Society of Ontario.

The most difficult contacts to make are people whose families did not live in Canada at the time of the war or who are descended from the less than 20 per cent the Canadian population in 1914 who were not of British or French descent. These stories are part of our collective history. The war did as much to shape these people as it did the majority demographic in Canada at the time, and their descendants.  In that regard, we’ve only had one participant who is the descendant of a person who spent time in an internment camp. This participant had his grandfather’s parole papers.  I am dealing with two Polish retirement homes and have my fingers crossed.  I’ve already heard from Arlene Chan and she confirmed that stories of Chinese labourers are rare and we don’t have any leads to descendants of the approximately 300 Chinese in Canada who volunteered. This is a war that engaged countries from every continent except Antarctica. The security guard at last Sunday’s pop-up had an uncle who fought in the Indian Army allied with the British in Egypt. He promised to write his family in India to see if they had more information. Japan was an ally. We have a few German stories and will be having some Italian participants. So far no one whose relatives were engaged at Gallipoli.

You get the picture. If you can help to provide leads, media contacts and lend your name to the project, we will be very grateful.

Thank you for your consideration.

Ruth writes:  it sounds like a soul-searching idea.  We hope it will lead to reconciliations and forgiveness,