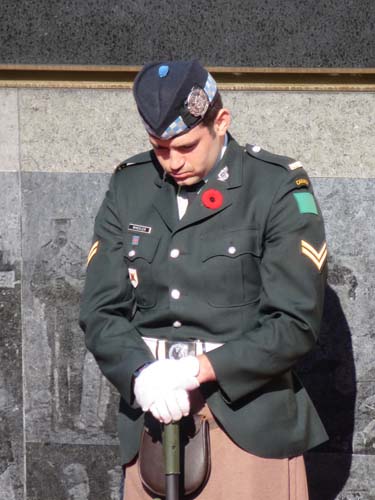 Ruth writes: The last time I went to a Remembrance Day ceremony, it was at the Old Toronto City Hall in 2012. It was not much different from celebrations I remembered from my childhood in United Empire Loyalist Brockville, Ontario. A band played “Onward Christian Soldiers.” I wouldn’t have been surprised to hear “Rule, Britannia” too.
This year, I decided to attend the event at Queen’s Park. I arrived an hour early, hoping to get a front row view where I could watch the ceremony unimpeded. Alas, it wasn’t early enough. Next time, I’ll aim for 90 minutes. 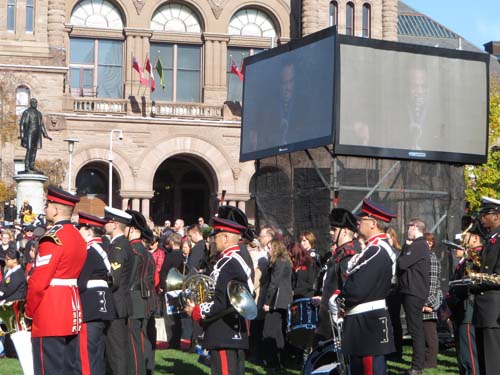 The ceremony was very different from my previous experience. It was more multicultural and sensitive to our diverse population. We had the traditional two minutes of silence ending with a bugler playing “The Last Post.” But a Roman Catholic priest led us in an inclusive prayer – according to our own different faiths. He also suggested it as a time of reflection for atheists.
Premier Kathleen Wynne thanked the Mississaugas of the New Credit First Nation. Toronto’s poet laureate Dr. George Elliott Clarke performed a passionate poem “testifying in blood to our charter values… preserve enlightened ideals… championed liberty…” This time, the band did not play “Onward Christian Soldiers.” 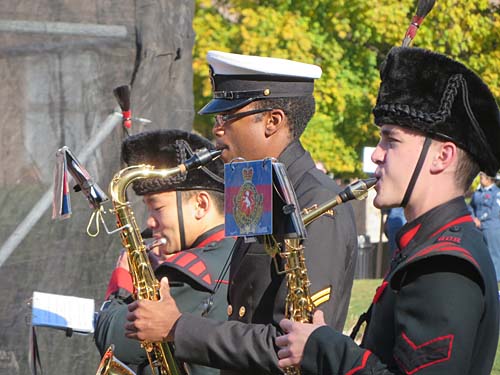 Representatives of many organizations including the consulates of Romania and Russia laid wreaths. A multinational choir of students from St. Joseph’s College School sang “O Canada.” After the ceremony, most people lined up to pin their poppies onto one wreath. 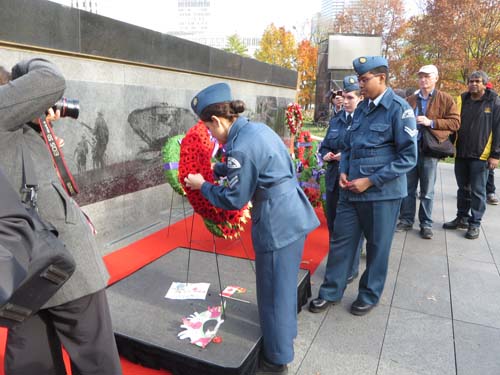 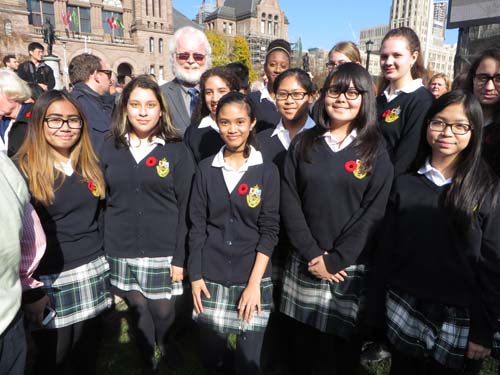 Afterwards, we were invited to see an exhibition in Queen’s Park by artist Charles Pachter. It was amazing. It could have been about air planes and tanks, marching soldiers and war ships. But it was about the misery of war: a soldier wasted by post traumatic stress disorder lying helpless in a bed; a terrified horse wearing a gas mask; a line of exhausted soldiers pathetically leaning on each other for support, their energy and direction destroyed by gas attacks. 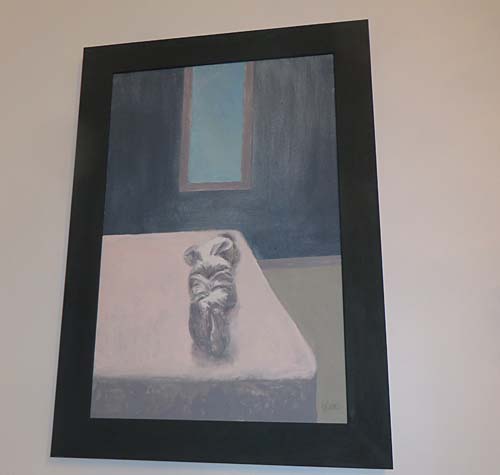 The souvenir catalog titled Lest We Forget pointed to the tragedy of war. Among the battlefield stories, I found commentators writing about war’s stupidity. Japanese-Canadian author Joy Kogawa whose family was “evacuated” from their home in Vancouver, wrote about the Christians who were killed in the atomic bombing of Nagasaki, Japan. Starting in 1587, St. Francis Xavier had helped to convert many of their ancestors to Christianity. Wrote Kogawa, “The Christians that Japan failed to annihilate after centuries of unimaginable cruelty, the Christian West managed to do in an instant.” 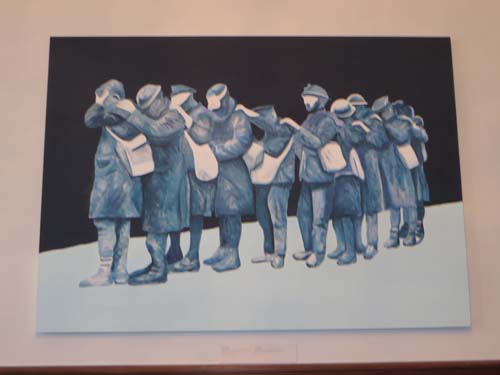 Another writer was Dr. Izzeldin Abuelaish from Palestine who cannot hate anyone even though Israelis killed three of his young daughters during the Gaza war. He wrote: “We must declare that our common enemy is war and hatred, not each other.”

A third anti-war writer was Kim Phuc Phan Thi, the Vietnamese child whose clothes were burned off by American napalm in 1972. She lives now in Canada, teaching forgiveness.
Margaret MacMillan authored the definitive history The War That Ended Peace: How Europe Abandoned Peace for the First World War. In Lest We Forget she wrote: “If we don’t understand how the First World War happened, we might also find ourselves accidentally in a war.”

I wondered why this event was so different from the other Remembrance Day ceremonies. The booklet was from the office of the Lieutenant Governor of Ontario, Elizabeth Dowdeswell, who was sworn into office in September of this year. I wondered what her background was and discovered she had been an Under-Secretary-General at the United Nations. Her official biography says her “aim is to bring multiple perspectives to the table, encourage innovation, and cultivate new ideas, sparking action and commitment to seeing these ideas move forward.“
In her very short tenure, she seems to have done that.