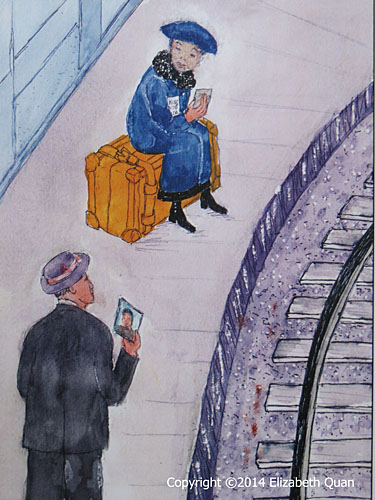 Every so often, I come across a painting I especially like. This one, a water colour,  is by Toronto’s Elizabeth Quan. It is one of the illustrations in her new book about her parents’ marriage which started seven years before they actually met. They were married by proxy while the bride Hong Yee was in China and the groom Lee King was in Toronto. His mother chose the bride and kept her in China for seven years after the wedding.

It was 1919 when they finally met at Union Station in Toronto. Lee King was sure it was his wife because she was wearing the hat and coat he had bought for her. She was sitting on a suitcase which he had also bought for her. Of course they had pictures of each other.

Hong Yee had traveled alone by ship across the Pacific Ocean and then by train from western Canada. She did not speak a word of English then.

The marriage was a happy one, says Elizabeth, one of their seven children. Elizabeth became a school teacher and an artist, a protégé of Jack Pollock. Her siblings included another teacher, an occupational therapist, an architect, an engineer, and a financier.

Elizabeth painted the coat, hat and shoes as she remembered them from her childhood. The picture is symbolic of many immigrant couples in those early days – not just from China but from other countries as well. Her 30-page self-published memoir titled Until Forever After – the Shaping of a Marriage is available from the author through ruthlormalloy@gmail.com. It contains nine of her paintings. 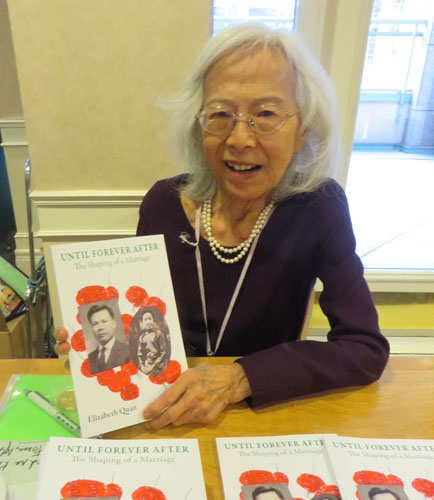