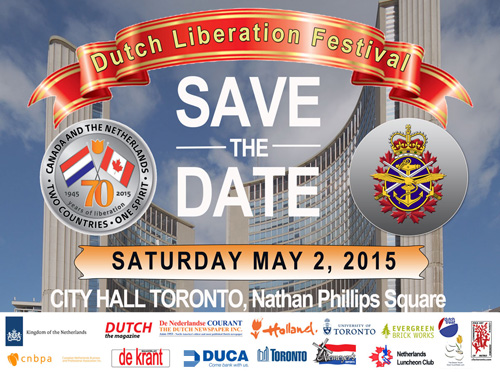 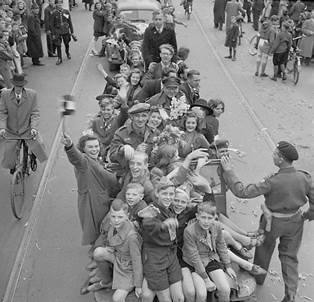 Our thanks to Fein Verheij and Henny Groenendijk for telling us about this important event.

During the month of May, we celebrate the 70th anniversary of the end of the Second World War and thank the Canadian Armed Forces for their contribution to the freedom of the Dutch people. Because of Canada’s invaluable role in liberation of the Netherlands, a close friendship between the two countries remains 70 years later. To show our appreciation and to honor the veterans who served during the Second World War, the Consulate General of the Kingdom of the Netherlands, together with Dutch-Canadian community organizations, presents the ‘Thank You Canada’ Dutch Liberation Festival on Saturday May 2nd in Toronto.

At 2:00 pm, the Opening Ceremony will kick off the festivities at Nathan Phillips Square by raising the Dutch flag. Several bands will provide musical entertainment on the main stage, such as the Toronto All Star Big Band, the Weston Silver Band and the déVah Quartet. Several Dutch activities will also being organized in and around the square; you can purchase Dutch goods at the Dutch market or play some old-fashioned Dutch games at the kid’s zone. We also have a beer garden with a terrace so you can enjoy the festival while having a brew. The festival will take place until 6:00 pm

Come celebrate with the Dutch and don’t forget to wear orange!