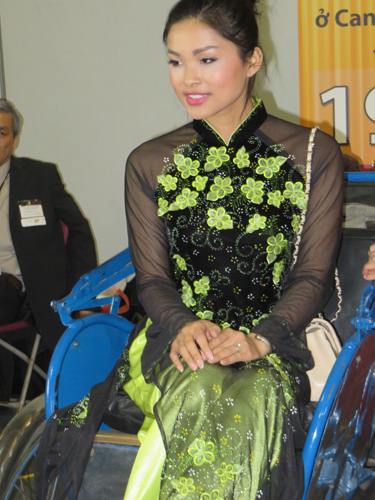 Ruth writes: I lived in Vietnam for two years in the 1960s, and have been back twice for foreign press reunions since its government changed in 1975. I like going to Tet New Year celebrations in Toronto. They bring back memories of school girls on bicycles in flowing white, long-sleeved ao dais, and the flower markets in Saigon that thrived during Tet in spite of the war. 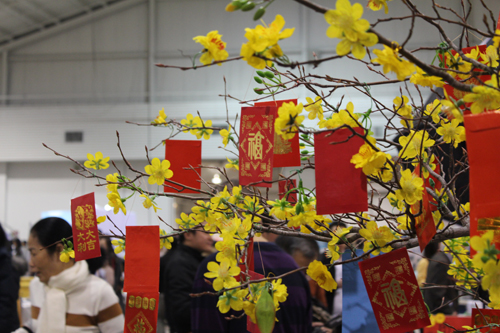 I also go to Toronto’s Tet celebrations because I like to find out how people who arrived in a new country with nothing have adapted. After the Vietnam war ended, Canada resettled over 60,000 Vietnamese boat people. I remember those days especially because, like many other Canadians and Americans, we brought a couple of refugees into our home for six months to help them get resettled. But that’s another story. 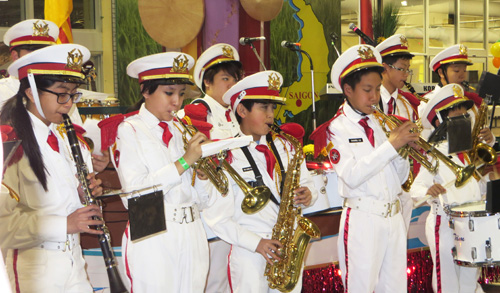 The Toronto Tet celebrations have been in convention centres. The community is so big, it needs a lot of space. At these, I’ve also found lion dances, performers in traditional opera costumes, and marching bands in spotless white uniforms. Vendors there usually sell food, mutual funds, and real estate. One booth had a contest where the prize was a rental of a BMW. 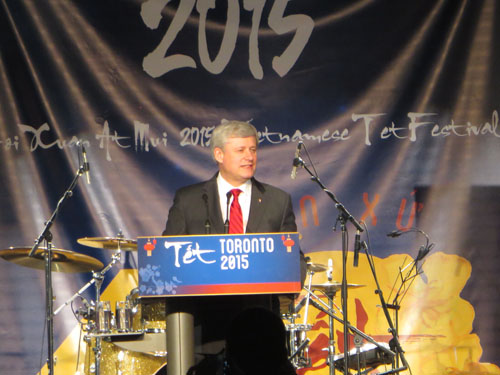 The Prime Minister apparently felt that Vietnamese-Canadians were important. He personally announced that every year on April 30th, “Canadians will in the future mark the modern beginning of this country’s Vietnamese community.” April 30, has been designated as “Journey to Freedom Day” in honour of Canada’s Vietnamese people. Unlike the other government dignitaries, he did not wear a South Vietnamese scarf around his neck. Was he just hot, or was he planning a trip to Hanoi? 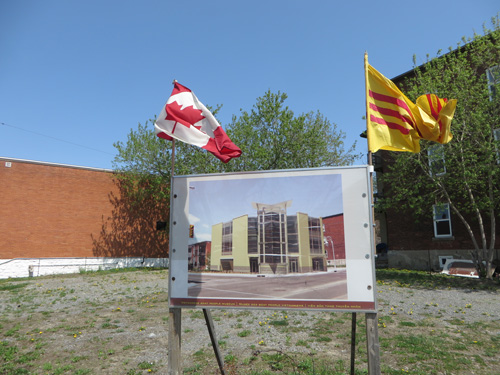 I learned that day that some of the Vietnamese were working on a Vietnamese Boat People Museum to be located in Ottawa. I had never heard of such a museum. I started looking for information about it but couldn’t find much. So upon arrival in Ottawa earlier this month, my brother and I drove to the site on Preston Street near Chinatown. A big sign with a picture of the proposed building stood on a vacant lot. Canadian and South Vietnamese flags indicated that indeed, we had found the site. 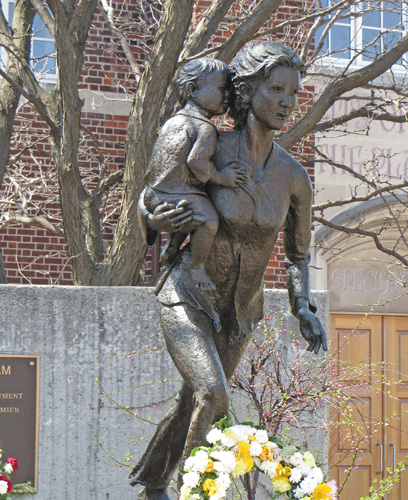 Across the street was a monument of a woman and a baby labelled Vietnamese Commemorative Monument inscribed in three languages “In memory of those who have lost their lives in their quest for freedom.” Two fresh floral wreaths dominated by roses had been recently placed there. One had a big 40, indicating the 40th anniversary of what many consider “the fall of Saigon”. 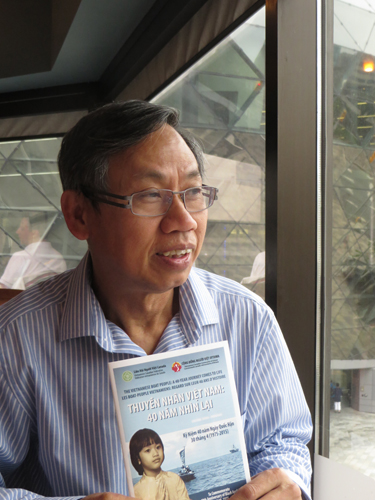 In Ottawa, I was able to meet with some of the people who were working on the museum project. Dr. Tri Hoang is president of the Vietnamese Canadian Federation. He said he had been serving with the South Vietnamese army during the war 40 years ago, and then he was sent to a re-education camp for two and a half years after the Americans fled. He escaped by boat to a camp in Malaysia in 1980 and arrived in Canada three months later. He has been a dentist in Edmonton now for 32 years. 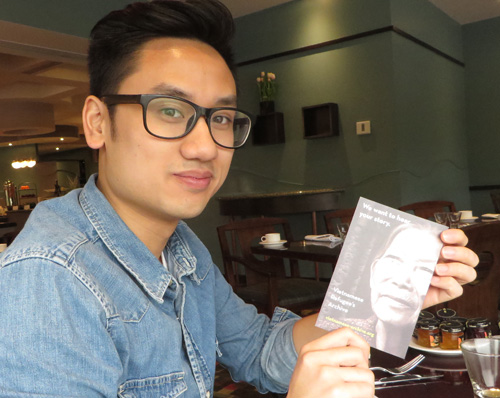 His son Nam Hoang was born in Canada and graduated in architecture from Carleton University. I also met Minh Nguyen who was born in Cholon, the Chinese part of Saigon, now renamed Ho Chi Minh City. Her father was a boat person too. He sponsored her and her mother to Canada after he arrived here. 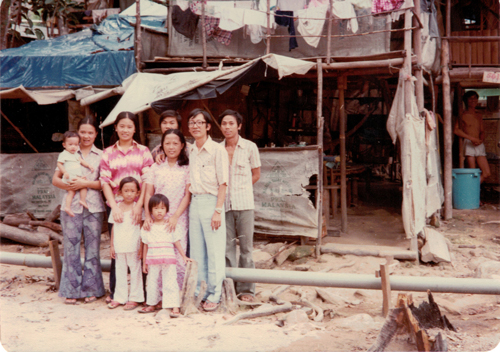 Their committee has now collected enough money to pay for the plot of land on Preston Street. They are, however, hoping to sell that plot and build the museum on land near the new War Museum and the Holocaust Museum. They were expanding their project from just a museum to a museum and a cultural centre. The Preston Street site would be too small for both, they said. 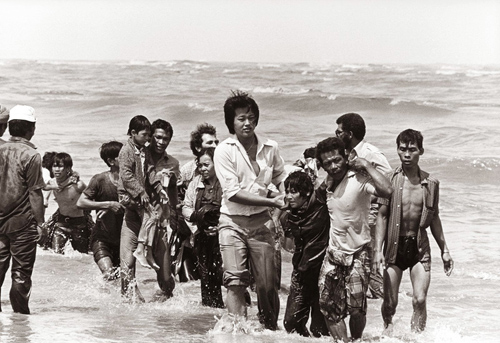 They handed me a brochure. “Currently, we are in the process of developing a new Capital Fundraising Drive, with the aim to launch it in early 2016 to coincide with the 30th Anniversary of People of Canada’s Nansen Medal Award. This award was given in 1986 by the United Nations for Canadian humanitarian efforts with the Vietnamese Boat People, and refugees from Cambodia and Laos.” Canada is the only country that has been given the Nansen Medal.

I liked the enthusiasm and dedication of the committee. I wondered why the museum couldn’t be built in Toronto since we have many more Vietnamese than Ottawa. They said Ottawa was chosen for the project because “it is the capital and because of the Vietnamese community’s deep connection with Marion Dewar, a former mayor who initiated the city-wide sponsorship of over 4000 Indochinese refugees in 1979.”  Dr. Hoang says Toronto has about 45,000 Vietnamese. Ottawa has about 10,000.

They mentioned a joint project in Calgary where Vietnamese were working with other Southeast Asians on a community centre.

In thinking about the Ottawa project afterwards, I wondered about the use of prominent public land near the popular War Museum just for the Vietnamese when there are other immigrant groups with equally tragic stories to preserve like that of the Irish, slaves from the United States, and Vietnam War Draft Dodgers.

While the Museum of History will be devoting two floors to the history of immigrants to Canada, space given to the Vietnamese and other groups will probably be very limited. There are a lot of different groups.

I remembered my own experience when Toronto’s Chinese community was small. Like other cultural groups, the Vietnamese also need a space where they can hang up their pictures. They need a place they can call their own, where their children can go on Saturdays to learn the Vietnamese language, where their young people can look for prospective spouses and where the latest batch of immigrants can learn English. Where else can outsiders learn to cook pho and Vietnamese spring rolls?

I took a special interest in the Vietnamese because I’ve lived in Vietnam and enjoyed the people I met. I wish them all the best in their project. For more information and donations, contact: vbpmcc@gmail.com.