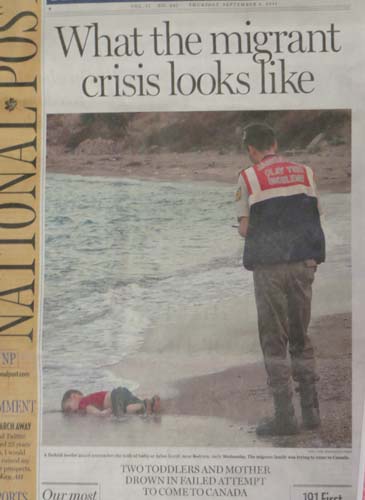 Ruth writes: Pictures of a toddler dead on a beach in Turkey, an interview with his aunt in British Columbia who paid for the trip, and attacks on the Canadian government’s response to the refugee crisis in Europe and the Middle East – these have been making headlines here in Toronto.

What is being done to help the largest refugee migration since World War II? What can individuals like you and me  do?

The First Unitarian Congregation of Toronto and the Muslim Association of Canada (MAC) have been working on sponsoring a Syrian refugee family to Toronto. http://firstunitariantoronto.org/social-justice-41/refugee-family-sponsorship. It is a start but there are millions of refugees.

The Canadian Broadcasting Corporation’s The Current has been talking about ways to help, and included an interview with Toronto’s Ripple Refugee Project: http://ripplerefugee.blogspot.ca/2015_05_24_archive.html .
The Current is on: http://www.cbc.ca/radio/popup/audio/player.html?autoPlay=true&clipIds=2674891035.

CBC’s website also lists some of the larger organizations lending a helping hand on: http://www.cbc.ca/news/trending/how-to-help-syrian-refugees-1.3215006. These include the United Nations Refugee Agency, International Organization for Migration, Unicef Canada, and Doctors Without Borders.

The Star yesterday mentioned four ways to help on: http://www.thestar.com/news/canada/2015/09/03/four-ways-canadians-can-help-refugees.html .

The BBC did a piece on why Syrians do not flee to Gulf states: http://www.bbc.com/news/world-middle-east-34132308.

Beyond the control of most of us is how to stop the civil wars and violence which are causing so many people to flee their homes in the first place. What is anyone doing in this regard?  Where are the peace makers?