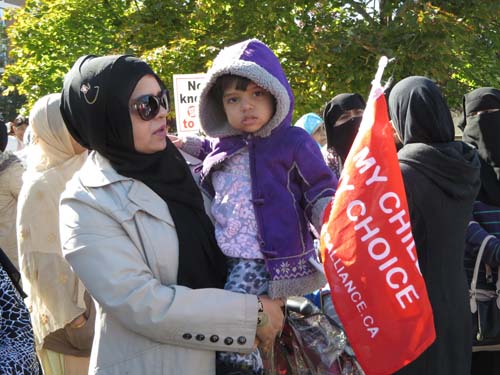 I went to Thorncliffe Park Public School on October 1 to find out for myself who these Sex Education protesters were and what they wanted. I heard about the rally in The Star.  I wanted to learn something about my neighbours. 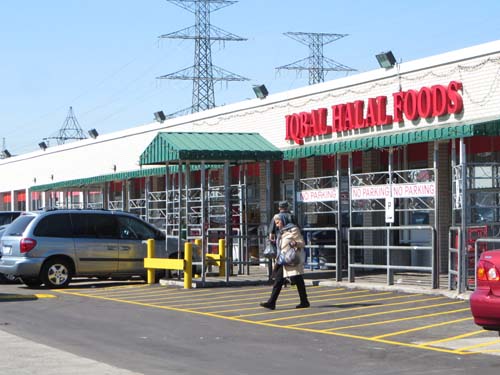 I had visited Leaside the month before because I was curious about its huge Asian & Middle Eastern supermarket, and the sweets shop next door. Ethnic markets fascinate me. I love exotic foods. What did Iqbal offer that Loblaw’s doesn’t? My husband, who used to volunteer in Thorncliffe Park, assured me that the area was safe.

As usual, this visit to a Toronto’s neighbourhood was full of surprises. That day, I learned how it feels to be carded. I was taking a picture of the school. Children were playing outside. Two policemen came over and asked why I was taking pictures of the children? They wanted my name, birth date and telephone number. The policemen were pleasant, yes, but the interrogation made me feel uncomfortable. My birthdate!! I was merely, yes, naively, taking an establishment shot – with the name of the school – a newsworthy school – in the background. The police were concerned about sexual predators and identifiable children. They said there was no problem taking pictures of the children in the demonstration because they were not on school grounds and their parents were with them. 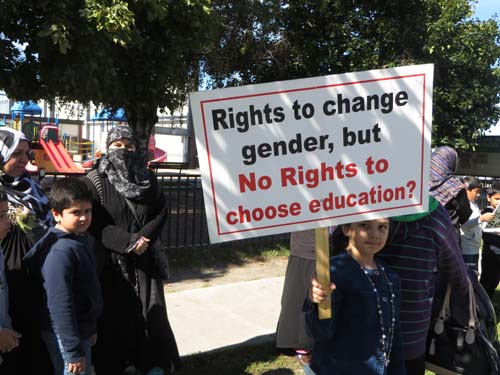 The policemen were there to protect the demonstration. One of the leaders, Khalid Mahmood, personally gave me permission to take pictures of all participants. It turned out many parents wanted me to take pictures of their children holding signs. No one, child or adult, objected except for a couple veiled women who appeared to hide even their eyes from my camera – as if someone could identify them from their clothes. Or steal their spirits. Niqab-wearing participants were a tiny minority. 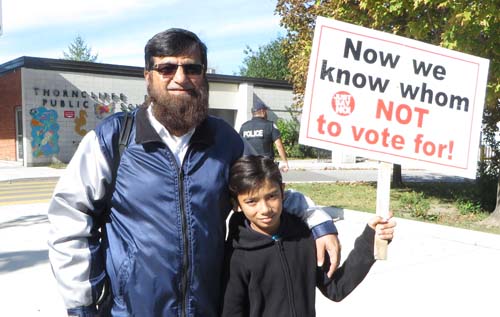 The leaders were male. Their English was good but not perfect. What did they want? One answered, “We are fighting for our consent because it has not been heard in the school. By the premier and by the minister of education. They are trying to teach something to our kids which we have a reservation for.”

Another said, “We agree with most of the curriculum 90% – but too much is controversial. It says you do it. It’s pleasurable… In no single place does it say don’t do sex, intercourse, oral sex…”

Many of the protesters had no alternative but to send their children to a public school. They could not afford private schooling. Today’s demonstration was an act of protest, they said. Even though many of the children were back in the public school, the parents wanted to show their continued objection to the curriculum. 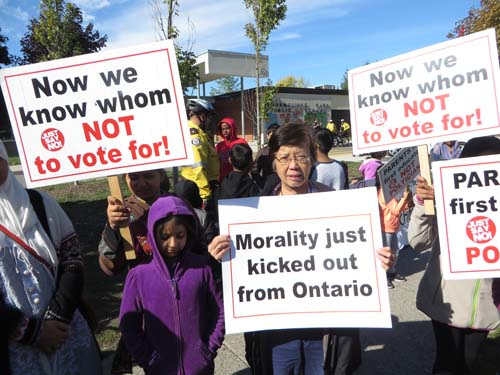 I was surprised to find a woman with a Chinese face among the demonstrators. Originally from Hong Kong, Bernadette Cheng has been in Canada for over 40 years. She was from the Chinese Martyrs Catholic Church in Markham. She had no children in the school but she objected to the curriculum, she said. 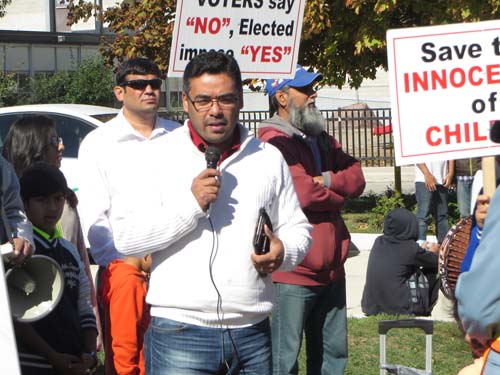 Paulo Kamisaki was the pastor at the Igreja Assembléia de Deus Peniel church. He and his family were from Brazil. He was very vocal about his support to the protest. 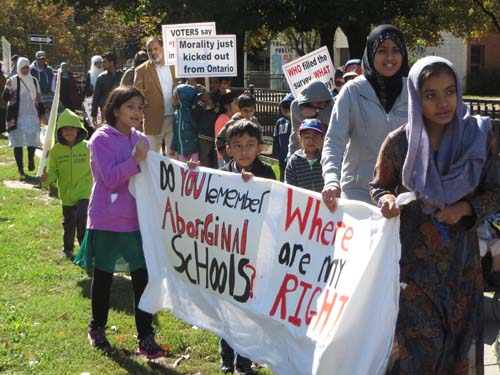 Judging by the profusion of well-printed posters, it was obvious the demonstration was carefully organized. Mahmood, speaking English and Urdu, the language of Pakistan, told the marchers not to go on school property and to stop for street lights. He got the line of protesters moving from the school to the nearby East York Town Centre. I estimated about 100 adults, both men and women, and many more children including lots of girls. The kids were having a lot of fun. 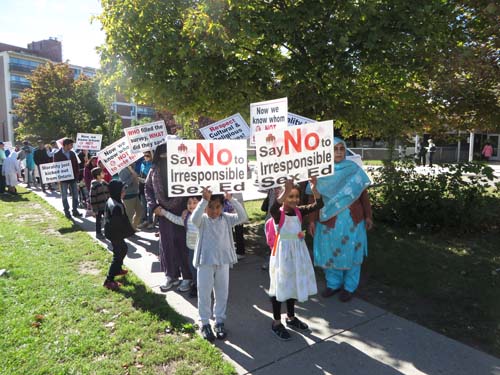 At that point I had to leave, but it had been a stimulating experience. I had just finished reading the memoir of Benazir Bhutto – former president of Pakistan who was assassinated largely because she was a pushy woman. Pakistan is also the country where the Taliban shot Malala Yousafzai. The author of I Am Malala, this young woman won the 2014 Nobel Peace Prize for promoting education. I was delighted that the Toronto residents, including many women, were not afraid to express their feelings.

The conflict has not yet been resolved. If you want to attend future events and see what happens, you can find information in the mainstream media and on: Facebook: Thorncliffe Parents. Its website is:
www.thorncliffeparents.com. Just don’t take pictures of recognizable children on school property without permission. 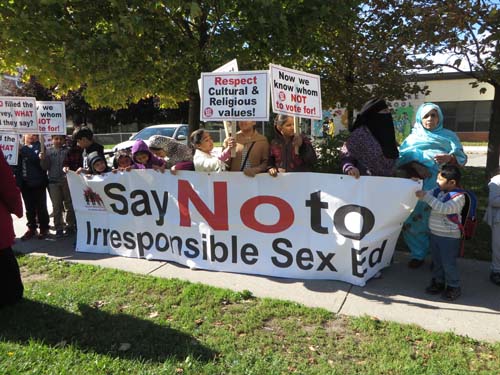 For a recent Toronto Star article on the situation, see: http://www.thestar.com/yourtoronto/education/2015/10/02/teacher-vows-to-be-lightning-rod-for-truth-amid-sex-ed-protests.html.