Ai Wei Wei is the most famous contemporary Chinese painter combining Chinese art themes with foreign influences. But Toronto has several such Chinese artists. Yitong Lok will be speaking about 20th Century Chinese art including his own and his father’s on Sunday, February 28 at 2pm, Room 5150. OISE, 252 Bloor Street West.

The talk is sponsored by the Toronto Canada-China Friendship Association which tells us that “Yitong Lok studied painting in Beijing, Vancouver, Toronto and Florence. The family has ties with many of the 20th century Chinese masters who changed twentieth century Chinese Art History (Wu Zuoren & Li Ruinan).  Both Yitong and his father were involved in these controversies. Lok will show some historical photographs of these masters that capture memorable moments, as well as their paintings.  He will talk about the motivation and concepts behind his and his father’s works.

“In 1999, father and son painted large centre-pieces for the Chinese Cultural Centre of Greater Toronto.  Then Premier Dalton McGuinty commissioned a portrait of Norman Bethune which is in Queens Park’s permanent collection.” 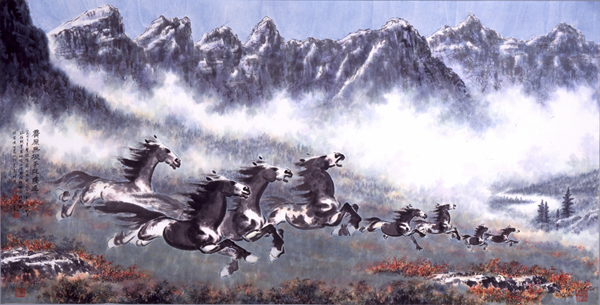