Ruth writes: I have been looking for immigrant art that tells personal stories in a style that reflects both birth countries and Canada. So far, I haven’t found very much. I’d like to promote this kind of art because it shows something new and different, a 21st Century multicultural Canadian style if you will.

So I was very excited earlier this month to find at the Museum of International Folk Art in Santa Fe, New Mexico, an exhibition called Between Two Worlds: Folk Artists Reflect on the Immigrant Experience. It had some samples of what I mean. At first glance, you might think them comic strip drawings but look at them closely.

Our cover picture shows the forced exodus of people from Laos at the end of the Vietnam War.  What is amazing is that it’s done in traditional Hmong embroidery techniques. Here is a story of airplanes, buses, refugee camp, boats, and long lines of displaced people. Caption: Zoua Vang Lor, Story Cloth, 1985 – 1989, made in Ban Vinai Refugee Camp, Northeast Thailand. 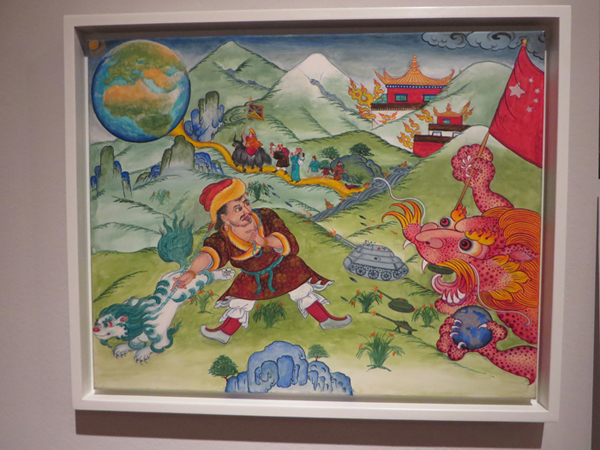 I like the above one by a Tibetan monk too. The Chinese lion is burning down temples and attacking Tibet with tanks and guns, but the Dalai Lama in the background escapes to India to spread his message of peace to the whole world. The man in the brown robe has “one foot in his home country and one outside it. Like the artist and many other Tibetans, this man is deciding whether to stay and risk death or follow the Snow Lion, Tibet’s national emblem, towards safety and hope in the West.” 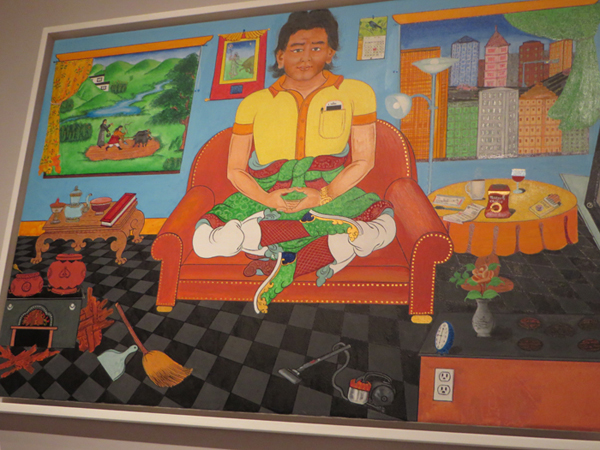 This painting by the same Tibetan, a thangka-trained artist, represents his emigration from Tibet to America’s Santa Fe. “Despite drastic differences in his surroundings, the inner work of his spiritual practice remains the same.” 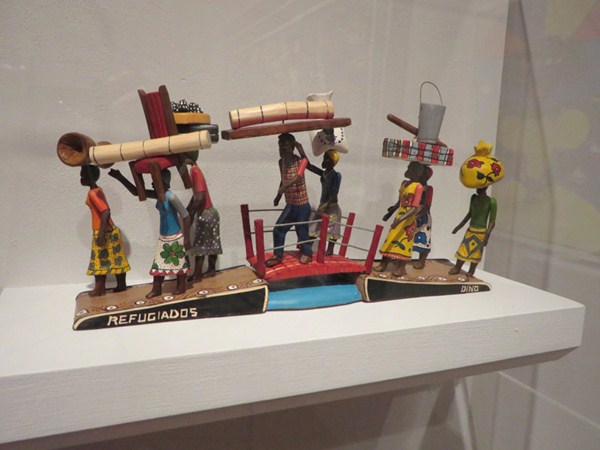 This painted carved-wood sculpture about 45 cm. wide depicts refugees fleeing the civil war in Mozambique. They carry their most precious possessions on their heads in the traditional way. “Over one million people died during the war, through fighting and starvation.”

Unfortunately the Between Two Worlds exhibition closes on April 3 but this museum has some of the most exciting folk art I’ve seen in its permanent collection. They will still be available, The museum’s website is: http://www.internationalfolkart.org/.

Please let me know of any similar works done by Torontonians. They can be more subtle in their rendering than these. Email: ruthlormalloy@gmail.com.  Thanks to the Museum of International Folk Art for letting me published these images. .