Do you love watching fireworks live on television as people celebrate the New Year in many cities around the world. They reach Toronto on the hour on December 31 starting at around 8am. Auckland, New Zealand and then Sydney,  Australia are usually the first and they might be followed by Dubai and London.  I always feel a sense of community with people abroad enjoying the same event I do. I expect you do too. 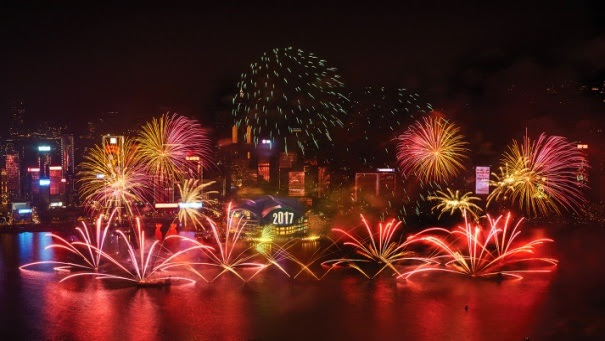 But can you watch fireworks taking place in your favourite cities? As Karisa Lui of the Hong Kong Tourism Board in Toronto explained, the Hong Kong fireworks will start at 10:55am and go on to 11:10am on December 31 (Toronto time). It has invited worldwide broadcasters to air the live satellite feed; however, it is not sure if it will be live or delayed to fit respectively TV news schedules.

“Canadian TV channels like CTV, CityTV, Global TV, CBC will air countdown fireworks of cities around the world. You may also download the Hong Kong firework display video from our FTP site after 3 pm on December 31, ftp://NYCD2016-b:445566@ftpsvr01.hktb.com/.”

If you want to see the New Year’s Fireworks in your favourite cities abroad, you have to do some Googling or wait for them to appear on YouTube. Dubai has a webcam at https://www.webcamgalore.com/webcam/United-Arab-Emirates/Dubai/260.html.  Check for other live streaming webcams on: http://www.camvista.com/watch-live-video/new-year-eve-live-webcams.html. You might try  Twitter.com.

Let me know if I’ve missed any resources. Reply below or email: ruthlormalloy@gmail.com.