You can help too. If you wish, you can send donations to help the families with funeral expenses and any support they need: https://www.gofundme.com/quebecmosque .

SoundVision.com is a U.S.-based Muslim organization which has been sending out advice to Muslims there on how to respond to anti-Muslim attacks in the U.S. Today’s blog is about Canada’s tragedy: our six people killed yesterday while praying in a mosque in Quebec City, 17 others injured including, five who are in critical condition.

Its Talking Points & Thinking Points suggests that Muslims write to the Media about this event: “If they are reporting it without mentioning world leaders’ condemnation, request them to mention it and ask Trump if he plans to condemn attacks on mosques across America and Canada… If the media does not call it a terrorist attack as the Canadian Prime Minister has called it, ask them to correct it… CNN is using neutral words like “shooting at a mosque,” instead of calling it an attack, as though both sides were shooting.”

SoundVision.com has been generous in giving advice on how Muslims can respond to the rising anti-Muslim feelings in the U.S.; for example, it gives safety tips for Muslim women walking alone. It suggests they keep their car keys in hand as they approach their car. “You can  push the alarm button on your security system if you feel threatened.” Just reading about its suggestions makes me realize the fears that Muslims are experiencing in that country, and probably now here. 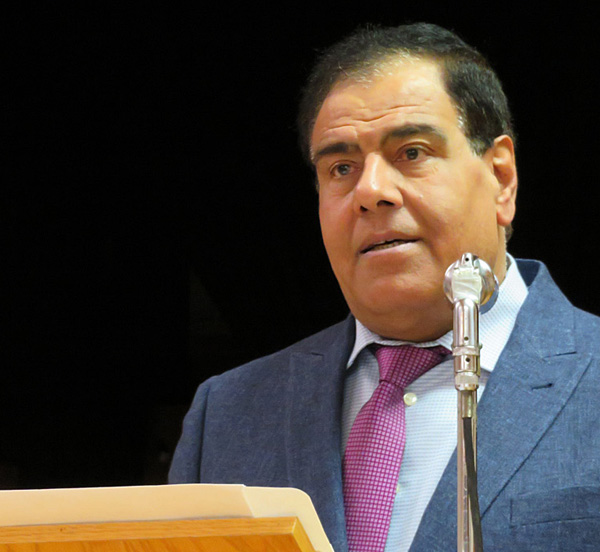 In Toronto, you can reassure your Muslim neighbours of your support. You can suggest they contact you for help if they fear for their safety.

The first week in February is Interfaith Harmony Week. You can find out how much you have in common with Muslims, Hindus, Zoroastrians and others. See: http://www.interfaithtoronto.ca/events.html.

You could read Dr. Izzeldin Abuelaish’s book, I Shall Not Hate. This is the Palestinian doctor whose daughters and a niece were killed by Israeli shells in Gaza. Now based in Toronto, Dr. Abuelaish continues promoting his message of peace and reconciliation. He is shown here speaking earlier this year at the Pax Christi Peace Day at St. Patrick’s Church in Toronto.

Please let us know of other suggestions on how you can show you care. Write to us at: ruthlormalloy@gmail.com. Ruth.