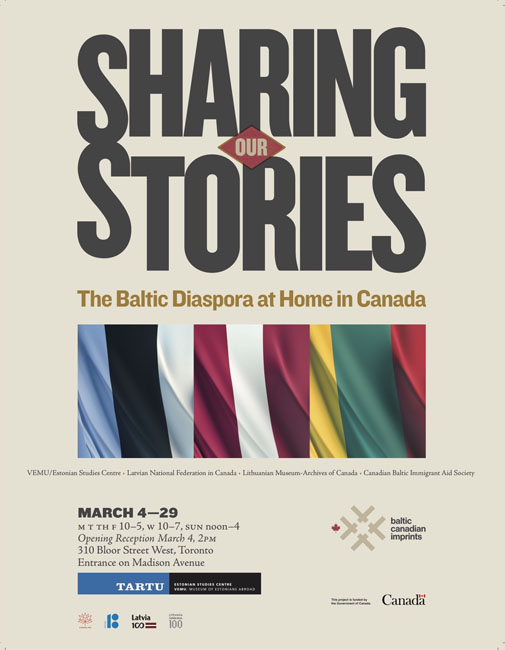 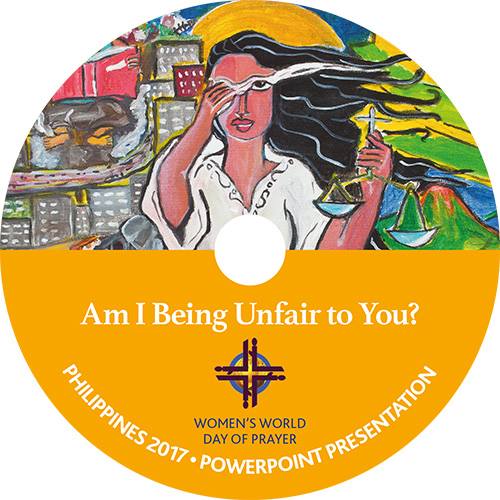 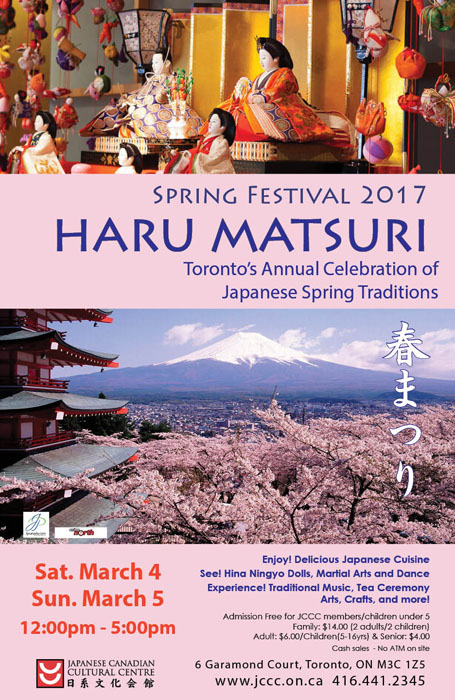 “Please bring a non-perishable food item for our Purim Food drive – food will be donated to the Daily Bread Food Bank.” http://us11.campaign-archive2.com/?u=c251fb55ecb480ca18cacd5de&id=c09d39ef39.

Purim celebrates the deliverance of the Jewish people from destruction in the ancient Persian Empire, a story recorded in the Biblical book of Esther.

Mongolia. Mongolian Ethnic Balled Group Khusugtun’s Canada Tour. Sunday, March 5. 2pm. $45-$60. Greenwin Theatre, Toronto Centre for the Arts, 5040 Yonge St. At North York Centre subway station. This fee is above our usual criteria for “affordable” prices, but we mention this wonderful event of unique singing because of its generous amount of performances on YouTube which you can see and hear for free:

Throat singing imitates “the sounds of nature, such as flowing water and animal calls. One legend of the vocal tradition’s origins tells of how a sensitive man first sounded throat-singing by imitating the ceaseless crying of a mother camel that had lost its calf.” Judge for yourself about this art that you can find also among Canada’s Inuit. 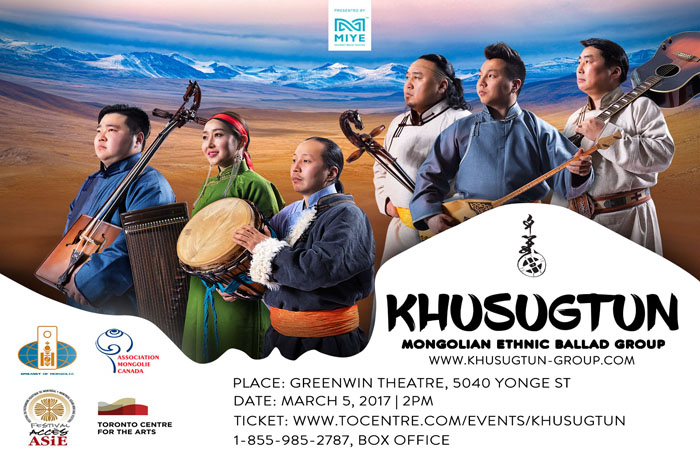 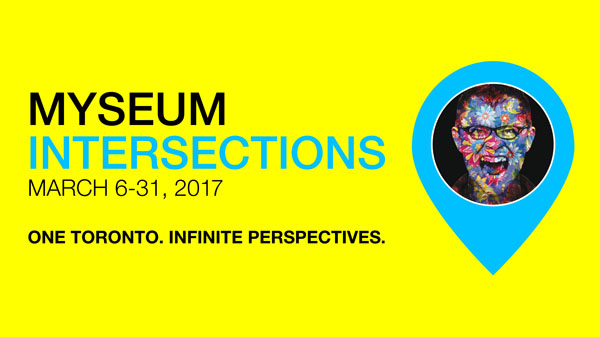 Muslim. The Seerah Trail: Live Theatrical Performance. Friday, March 3. 7pm-9pm. $15. “Experience how the Prophet and his Sahaba lived, what motivated them and how they transformed their lives. Absorb important lessons from the Seerah through an inspiring drama performance by home-schooled students from the Understanding Islam Academy. “Understanding Islam Academy.  Rose Theatre, 1 Theatre Lane, Brampton. Tickets and more information: https://www.eventbrite.com/e/the-seerah-trail-live-theatrical-performance-2017-tickets-31352157146 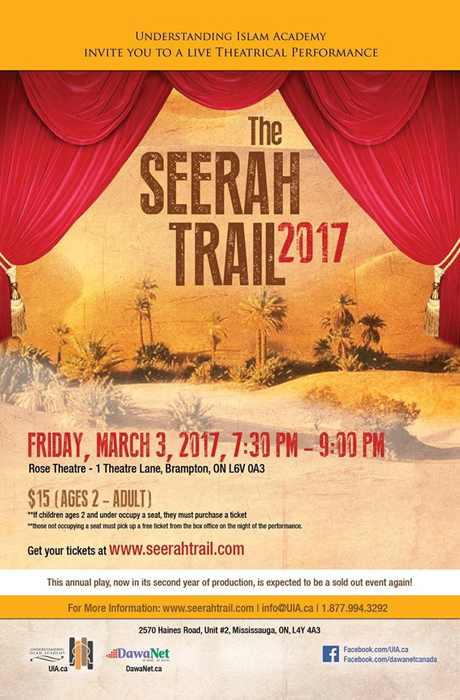 Muslim. Women. Book Event: The Muslimah Who Fell to Earth. March 5. 2-4pm. $5. The Muslimah Who Fell to Earth is a new collection of twenty-one personal stories from a diverse group of women, revealing in their own ways what it means to them to be a Canadian Muslim woman. Meet the book’s editor, Saima Hussain, and some of the contributors. Haroon Siddiqui, editor emeritus at the Toronto Star, will be the guest speaker. Books will be available for purchase. Auditorium, Noor Cultural Centre, 123 Wynford Dr, North York. 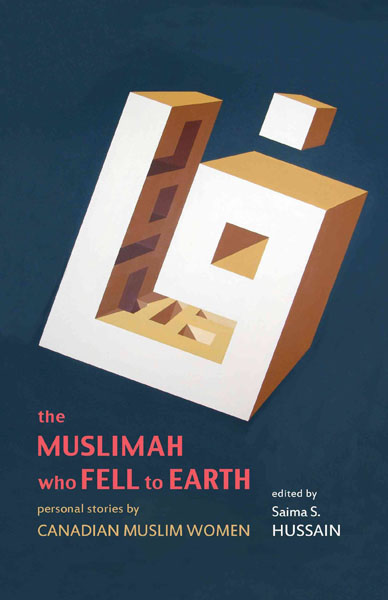 Our Blog about this event: https://www.torontomulticulturalcalendar.com/2012/02/26/233-report-on-saturdays-swiss-morgestraich-parade 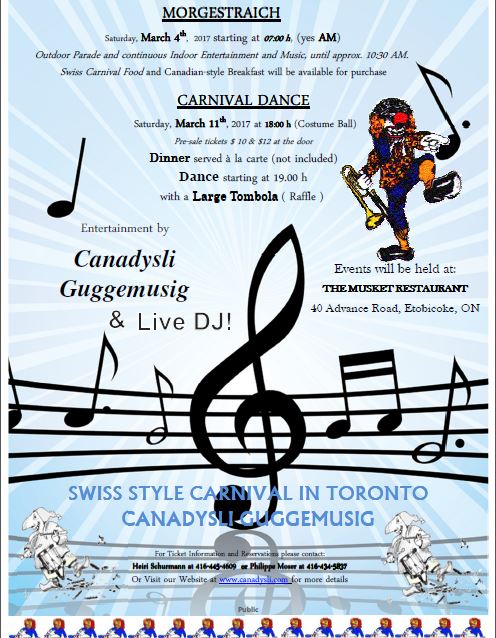 Taiwan. Republic of China. Return to Innocence. March 4. 6pm-9pm. Most Munk School of Global Affairs are free of charge. This film is about the Taiwanese Amis cultural group and “the Work to Return, Recover and Reclaim their Heritage”.  It should be of interest to people concerned about dominant cultures and first nations in Canada too. Afterwards, Professor Scott Simon will draw on his two decades of ethnographic work in Taiwan to discuss issues of indigenous rights and cultural change. Innis College, Town Hall, 2 Sussex Avenue (at St. George, south of Bloor).  http://us9.campaign-archive2.com/?u=cc21cbc5d4c8c24a0346edd24&id=28ab5cb9d7&e=7e947b9754 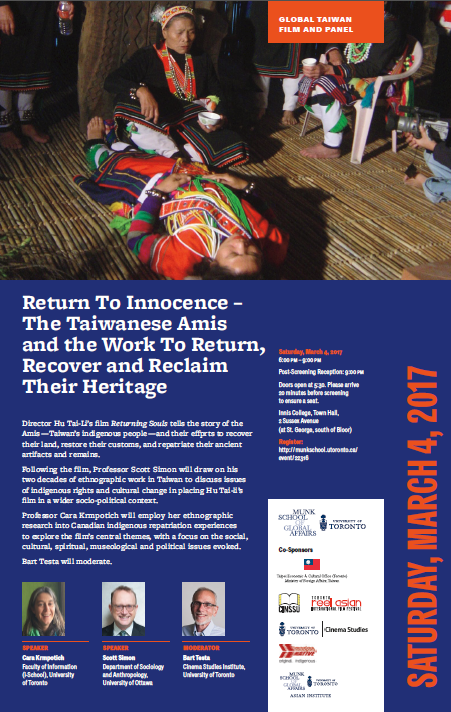 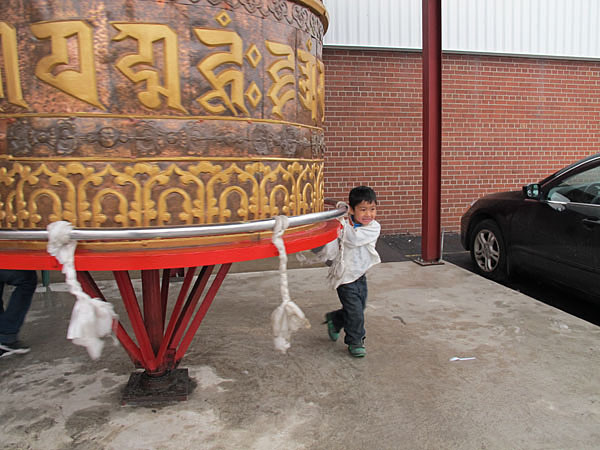 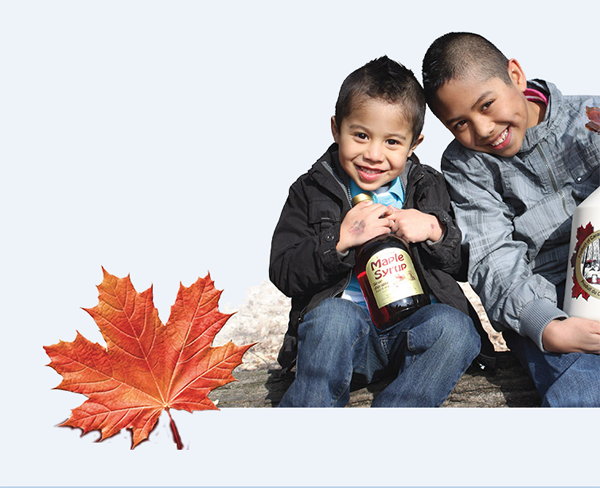 Toronto. Multicultural. Several conflicting demonstrations at Toronto City Hall. 11am-whatever. On one side is the Canadian Coalition of Concerned Citizens (CCCC) that is promoting “…Freedom, Liberty & Justice that stands against Sharia Law & Globalization”. https://www.facebook.com/CanadianCCC/videos/vb.712135832297963/729360157242197/?type=2&theater.

The Communist Party of Canada and several other groups will be counter-protesting about the same time in the same place. The Facebook message of the Church of St. Stephen in-the-Fields says: “We, along with many other groups and individuals, intend to be present before they (the CCCC) arrive, with messages of support, inclusion, and love… supporting our Muslim neighbours…”

I hope this will lead to dialogue. Shouting slogans at each other is not usually productive. https://www.facebook.com/events/1144030005708346. 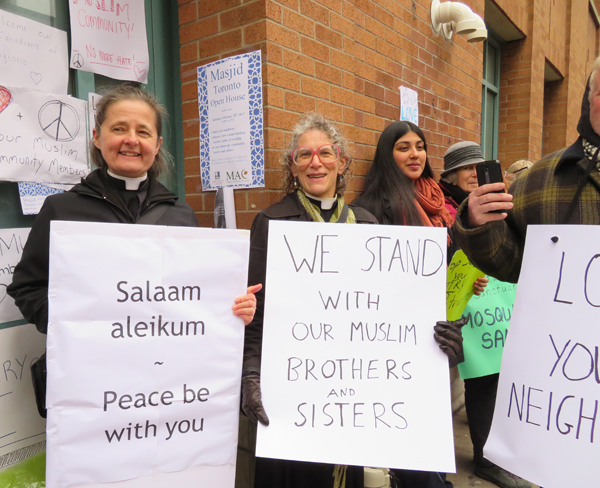 Ukraine. Feature film Bitter Harvest. In English. “On March 3, the film “BITTER HARVEST” will be released in theatres across Canada, portraying a love story set against the backdrop of the 1932-33 Holodomor in Ukraine. Produced by prominent Ukrainian-Canadian Ihor Ihnatowycz, the film brings the tragedy of the famine-genocide to audiences around the world.” UCC. See trailer: http://www.dfilmscorp.ca/bitter-harvest 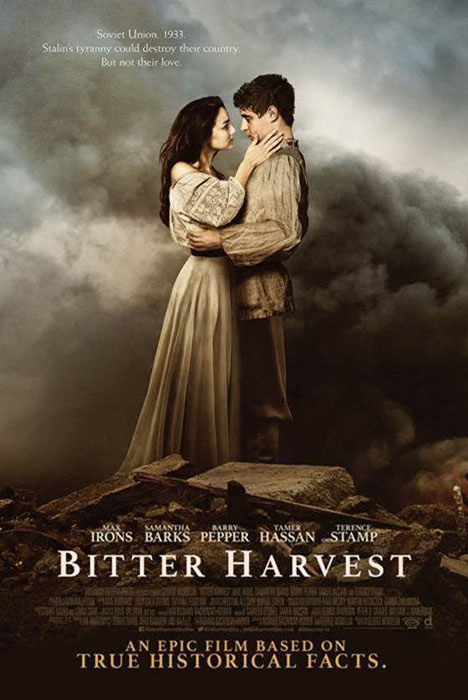 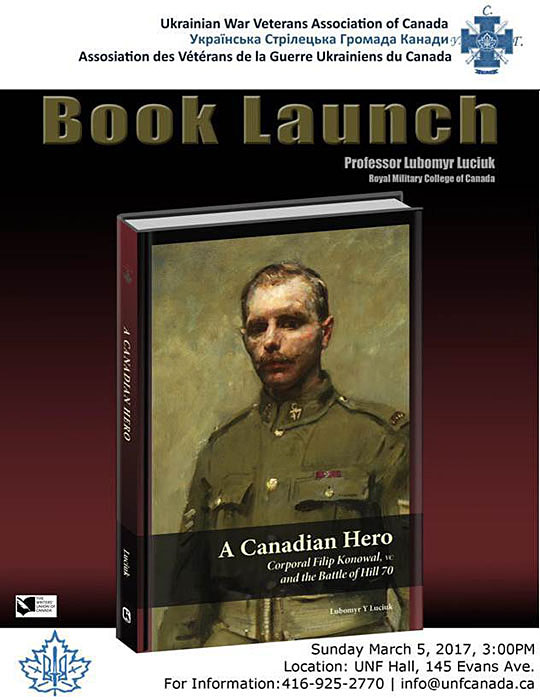 Please send us notices of free or almost-free events that are expressive of Toronto’s famous multiculturalism. Share our blog with your friends. Follow us on Twitter.com/torontomulticul, and join our subscriber list above. Contact us at: ruthlormalloy@gmail.com.

Our Featured Image is courtesy of the Myseum Intersections Festival website.– Ruth