Nara was the capital of Japan in the 8th century. At that time a robust cultural style flourished called Tenpyo. The screening series explores the precious legacy of the Tenpyo culture preserved and passed down in Nara for over 1,200 years.

Friday, April 7, 2017, 6:30 p.m. Tenpyo Art Screening Series I: GIGAKU, Reviving a Mysterious Ancient Masque. 58 min. 2002.  Giant masks from ancient times are stored at the Todai-ji Temple and Horyu-ji Temple. These are the reminiscence of Gigaku, a performing arts tradition which became extinct more than seven hundred years ago. The late Mannojo Nomura V (1959-2004), a Kyogen master, revived Gigaku in 2001 in the belief that the tradition of masked pantomime theatre travelled along the Silk Road, absorbing local arts on the way to Japan. This is a documentary of the collaborative performance of multiple nationalities, such as Chinese, Korean, Indonesian, Indian, Congolese, and Japanese, which resulted in an outstanding celebration of humanity.

If you are interested, please save May and June dates as these will be the only mention of these films here.  Ruth.

For total program of Spur Festival (April 6-9), a national festival of politics, art and ideas:
https://spurfestival.ca/app/uploads/SpurProgram_Toronto_hires_electronic.pdf . Toronto Festival Pass: $100 plus HST. Individual tickets between $5 and $20 with multiple event and student discounts available. 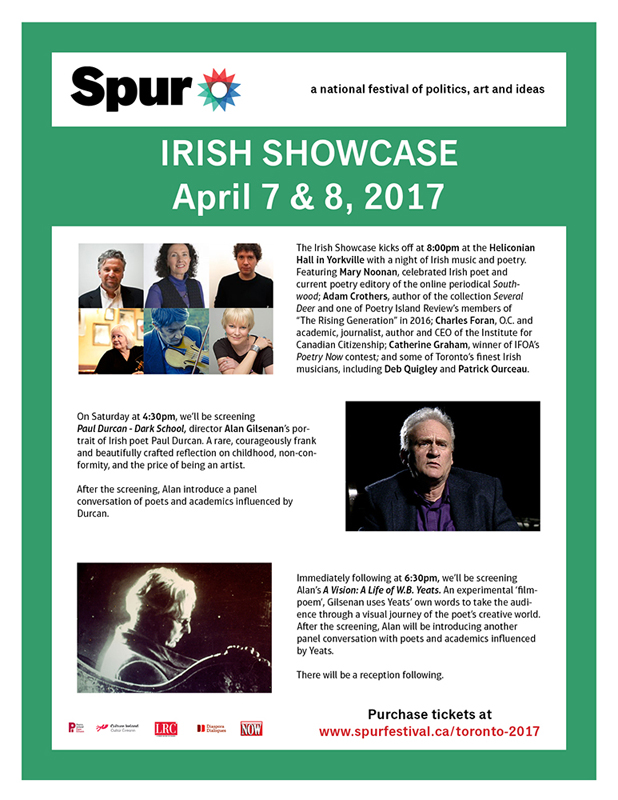 Please keep sending us posters of affordable events that express Toronto’s multiculturalism. We regret we only have space and time to post a sampling of the riches of this city. Our email is: ruthlormalloy@gmail.com. – Ruth